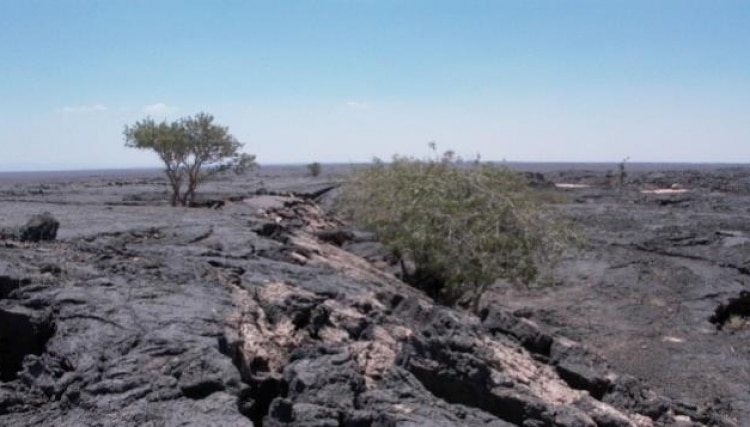 The volcanic plateau of Tulul al-Safa in southeast Syria

The Islamic State has pulled back from one of its last areas in Syria, in the face of an offensive since July by pro-Assad forces.

Local sources said hundreds of ISIS fighters withdrew from the Tulul al-Safa heights, a volcanic plateau in the southeast of the country.

The residents said Assad regime tanks, supported by airstrikes, were approaching the remaining Islamic State position east of Suweida Province. They noted that the pro-Assad troops and militia had suffered heavy losses in the campaign that began this summer.

ISIS once controlled much of Syria, especially in the north and east, but has been pushed back since 2015 by a combination of offensives by Turkish-backed rebels; the US-supported, Kurdish-led Syrian Democratic Forces; and the Assad regime and its Russian and Iranian allies.

The Islamic State is now centered on a pocket in eastern Syria, near the Iraqi border, which is being attacked by the SDF and US-led airstrikes.

The pro-Assad offensive in the southeast was spurred by an ISIS attack near and in Suweida city in July. More than 200 people were killed and dozens were abducted. Some of those taken were released in a recent swap for regime-held prisoners.

Residents said the withdrawing ISIS forces have moved to areas to the west of Tulul al-Safa or dispersed in the Badia desert region.

Turkish-backed rebels have launched an offensive against a faction accused of corruption rights violations in northwest Syria.

The rebels of the Syrian National Army exchanged heavy gun and artillery fire with the faction in Afrin city, which was taken from Kurdish control in the spring. All roads into Afrin were cut off, and a curfew imposed on residents by Turkish authorities.

The target of the offensive has not been named, but several rebel commanders said it was the militia Shuhada al-Sharqiya, which has been accused of numerous violations including looting, extrajudicial executions, and kidnapping civilians.

A rebel spokesman said operations were also being pursued in eastern Aleppo Province.

Yousef Hamoud, a ranking SNA commander, said, “Our end goal is to make the region into one unit, with a good security situation for everyone. The campaign is not against factions themselves, but against specific individuals and groups within military factions among the FSA [Free Syrian Army].”

A Turkey-based Syrian media activist questioned the explanation: “The SNA-led campaign is not to eliminate looters. Its aim is to eliminate those who have gone against the orders of Turkey — specifically the Shuhada al-Sharqiya faction, which attacked the regime [last May] without the consent of the Turks.”

Bashar al-Assad met a delegation of Jordanian lawmakers in Damascus on Monday.

The meeting with the group, led by MP Abdul Karim al-Doghmi, was an advance in the Assad regime’s effort to restore ties with Amman.

Last month the regime and Jordan reopened the vital Naseeb border crossing, which carried billions of dollars of trade before the Syrian conflict, after a three-year closure.

Arab countries have cut off the regime since the early days of the conflict, freezing its membership in the Arab League.