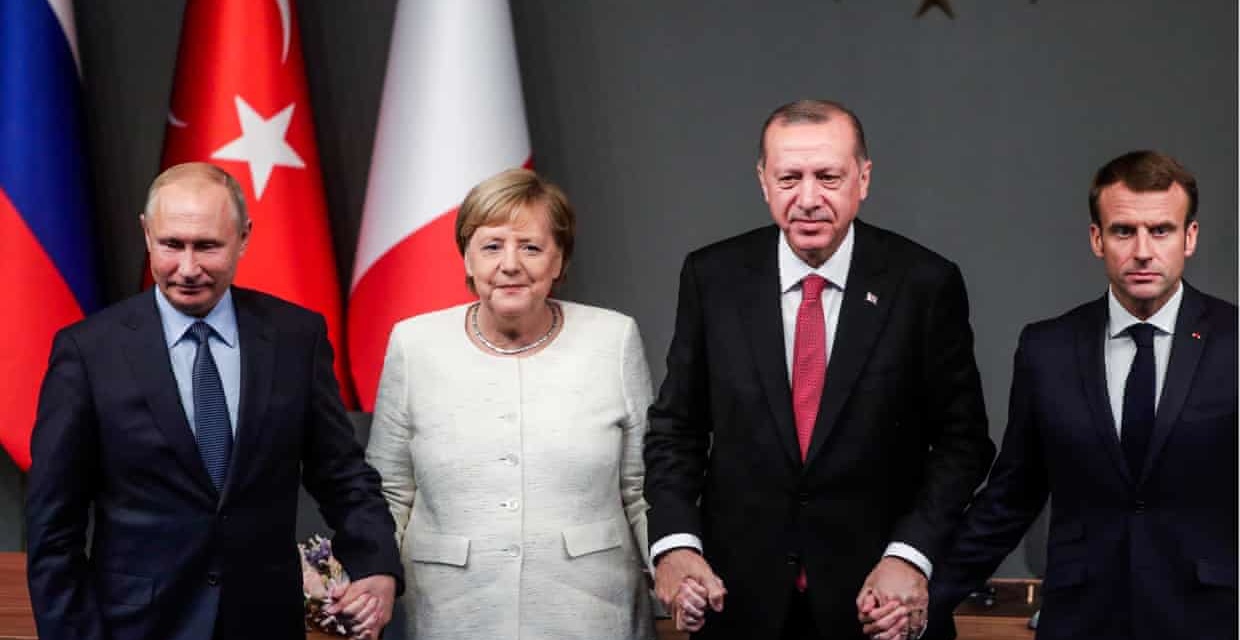 The leaders of Turkey, Russia, France and Germany have called for a lasting ceasefire in northwest Syria, around the last major opposition area in the 92-month conflict.

The four nations “stressed the importance of a lasting ceasefire” in a statement read by Erdoğan.

After the joint press conference, Macron urged Russia, the essential ally of the Assad regime, to exert “very clear pressure” on Damascus for a “stable and lasting ceasefire in Idlib”.

Last month Turkey and Russia agreed a 15 to 20-km wide and 100-km long demilitarized zone around the opposition area. The accord suspended Russian-regime offensive to help Assad fulfil his ambition to regain “every inch” of the country.

Saturday’s summit, along with US-backed, Kurdish-controlled areas of north and east Syria, reinforced a de facto partition of Syria for the immediate future.

But Putin kept open the option of military action against the rebels by calling the zone “a temporary measure”, saying he expected that “the Turkish government will ensure, in the near future, the complete withdrawal of the opposition from the zone and heavy artillery”. He added that Moscow reserved the right to help the Assad regime “eliminate terrorists” in Idlib if there were “provocations”.

Rebels have remained in the zone while withdrawing their heavy weapons, as Turkey brought in its troops and arms.

Pro-Assad forces have continued some areas on the periphery, killing at least seven people — including three children — on Friday.

Uncertainty Over Constitution and Reconstruction

The leaders’ joint statement also called for a Constitutional committee before the end of the year, “paving the way for free and fair elections”.

The Assad regime rejected negotiations for the committee earlier this year, in a meeting with UN envoy Staffan de Mistura before he quits his post at the end of November. The regime hit back at the UN’s role in the process, and held out against independent representatives — including women and delegates from ethnic groups and civil society organizations — who would sit alongside regime and opposition participants.

The closing statement cited “the need to ensure humanitarian organisations’ rapid, safe and unhindered access throughout Syria and immediate humanitarian assistance to reach all people in need”. It said conditions should be created “throughout the country for the safe and voluntary return of refugees and internally displaced persons”.

However, it did not refer to the dispute over internal reconstruction assistance for the more than $380 billion damage in Syria since 2011. Russia has called for the immediate provision of funds, but France and Turkey have said this can only come with a political transition in which Assad steps down.

The people of Syria will determine the future of President Bashar al-Assad.

As far as we are concerned, Assad is someone who has killed nearly one million of his citizens. He is not someone who we hold in high esteem. Massacres continue as before, but it is our wish that this process comes to an end and the people of Syria can begin to live their lives again.

Nor did the leaders engage with Erdoğan’s pledge to move against the Kurdish-controlled areas, both west and east of the Euphrates River up to the Iraq border.

Turkey considers the Kurdish militia YPG, the leading faction in the US-supported Syrian Democratic Forces, to be “terrorists” who are part of the Turkish Kurdish insurgency PKK.

The SDF has been trying to remove the last major pockets of ISIS territory since early September. They have been supported by US airstrikes, including one which struck a mosque and reportedly killed dozens of civilians early this month. The SDF had then taken the town of Sousah last week.

But on Friday and continuing into Saturday, ISIS fighters used a sandstorm to strike the SDF. They reportedly captured at least 20 troops, posting a video of six of them, and said they killed 40.

Col. Sean Ryan, spokesman for the US-led coalition, said “both sides are taking casualties” in a “difficult fight.”

He said the air cleared on Saturday, permitting US warplanes to back the SDF.