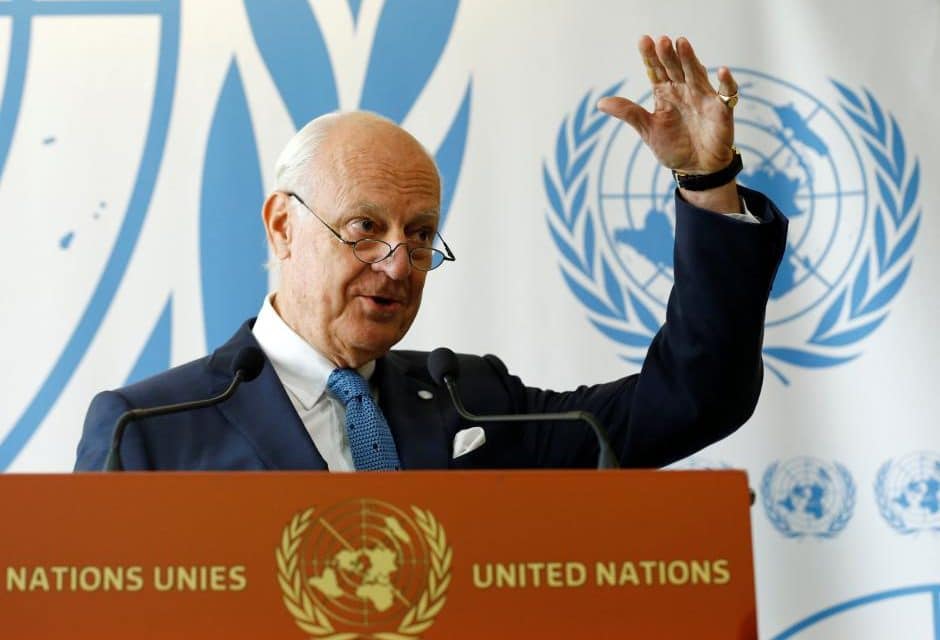 The Assad regime has bade farewell to UN envoy Staffan de Mistura by rejecting his attempt at a Constitutional committee for a political resolution of Syria’s 91-month conflict.

Syrian Foreign Minister Walid al-Moallem told De Mistura, who is leaving after four years, that the Constitution is a “sovereign matter”.

The comment was a rejection of the envoy’s effort to salvage some progress from his efforts through a committee including regime, opposition, and Kurdish representatives.

De Mistura has largely been sidelined as Russia, the essential ally of the regime, has taken control of the political discussions while enabling pro-Assad forces to seize opposition territory with its military intervention from September 2015. Critics have accused the UN official of providing cover for the regime, including its chemical attacks and mass killings, by refusing to put pressure on Bashar al-Assad.

The envoy said last week that he will depart at the end of November for personal reasons.

Powers such as France and Turkey have continued to assert that any political resolution, and provision of funds for reconstruction, must include a transition in which Assad steps aside. The President and his inner circle have resisted any such condition.

The work of the aforementioned committee must adhere to the UN Charter, international law, and UN resolutions on Syria in terms of commitment to Syria’s sovereignty, independence, and unity.

In affirming that the Syrian people are the only ones who get to decide Syria’s future,…this process must be led and owned by Syria.

The Constitution and everything related to it is a purely sovereign affair decided by the Syrian people without foreign interference….Some sides and states seek are seeking to interfere and impose their will on the Syrian people.

De Mistura offered no detail to reporters in a brief statement: “I held an expanded meeting with Minister al-Moallem and his deputy, during which we exchanged opinions clearly regarding the Constitutional committee and the political process in general.”