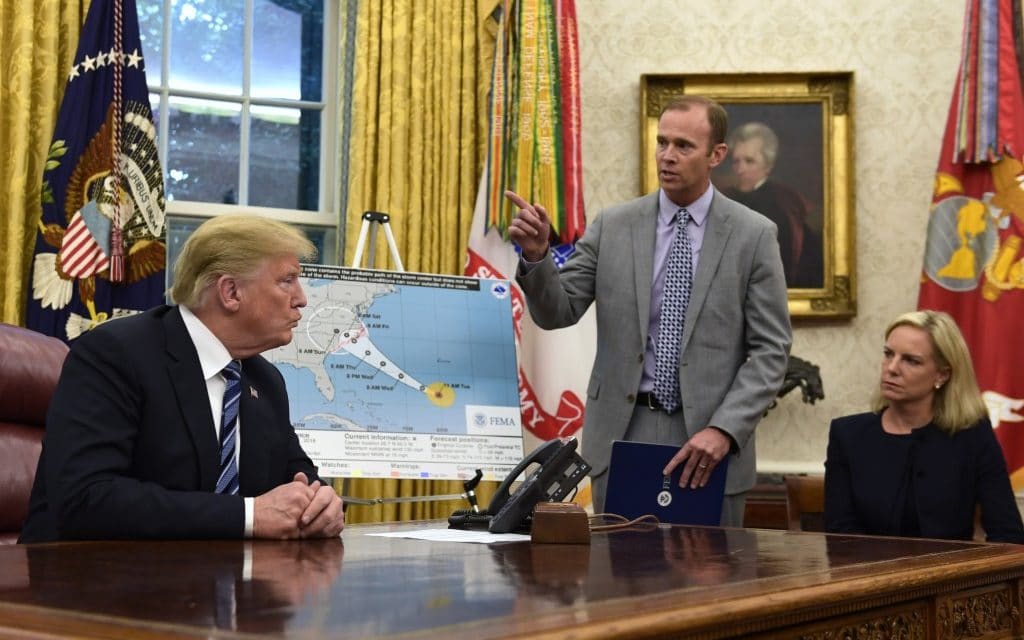 Donald Trump proclaims his success in the handling of Hurricane Maria that struck Puerto Rico in September 2017, despite an official toll of 2,975 deaths from the disaster.

Trump was speaking as Hurricane Florence, projected to be a Category 5 storm, bore down on the Carolinas with landfall projected for Thursday. He explained that “Puerto Rico was an incredible unsung success”:

I’m anxious to hear what Puerto Ricans have to say about this remark from President Trump: “I think Puerto Rico was incredibly successful…I actually think it was one of the best jobs that's ever been done with respect to what this is all about."
pic.twitter.com/wpvqCLQrBd

Much of the island was without power for months, with the electricity grid only fully restored in August. There were shortages of food and essential goods, and a lack of clean drinking water — a problem exacerbated by failure to get relief supplies to residents, despite Trump’s celebratory throwing of paper towels to people in a shelter during his October visit.

BREAKING: What may be millions of water bottles. meant for victims of Hurricane Maria, have been sitting on a runway in Ceiba, Puerto Rico, since last year, according to @FEMA, which confirmed the news to me, late tonight, after pictures, posted today on social media, went viral. pic.twitter.com/jidGJAvCyJ

In late August, Puerto Rico Governor Ricardo Rosselló raised the official death toll from 64 to 2,975, following publication of new research by George Washington University’s Milken Institute School of Public Health. Many of the victims were poor, elderly, and had chronic illnesses that required access to medications and medical equipment.

Other studies have estimated even higher casualties from the destruction and lack of supplies.

In the aftermath of the hurricane, Trump proclaimed his triumph and derided those who raised concerns about the relief effort, calling San Juan Mayor Carmen Yulín Cruz “nasty”.

Another revelation on Tuesday undercut Trump’s claim to vigilance over hurricanes, detailing his diversion of funds from the Federal Emergency Management Agency:

As #HurricaneFlorence bears down, I discovered today that the Trump Administration is taking money away from @FEMA so that they can pay to put more asylum seekers in detention centers. This is a scandal. pic.twitter.com/XRj928RIaD

Donald Trump marked the 17th anniversary of the September 11 attacks with a series of angry tweets and then a celebratory fist pump as he arrived for a memorial service in Pennsylvania.

Trump began his day watching a videotape of Fox TV, spurring him to quote a supportive correspondent in denial over the Trump-Russia investigation:

“We have found nothing to show collusion between President Trump & Russia, absolutely zero, but every day we get more documentation showing collusion between the FBI & DOJ, the Hillary campaign, foreign spies & Russians, incredible.” @SaraCarterDC @LouDobbs

Trump also continued his attack on the FBI and Justice Department for doing nothing about a supposed conspiracy against him, involving FBI agents.

His staff soon struck a tone more attuned to 9-11, declaring “Patriot Day 2018” and hailing his trip to Shanksville, Pennsylvania where passengers downed the United 93 flight before attackers diverted it into a target, said to be the White House.

But on his arrival for the ceremony, he greeted supporters on the airport tarmac in Johnstown with a double fist pump:

Trump struck a somber tone at the memorial: “This field is now a monument to American defiance. This memorial is now a message to the world: America will never, ever submit to tyranny.”

But he returned to his primary concern in the evening, assailing former FBI Director James Comey — whom he fired in May 2017 in an unsuccessful attempt to halt the Trump-Russia inquiry — and declaring “the whole thing was illegally and very unfairly set up”.