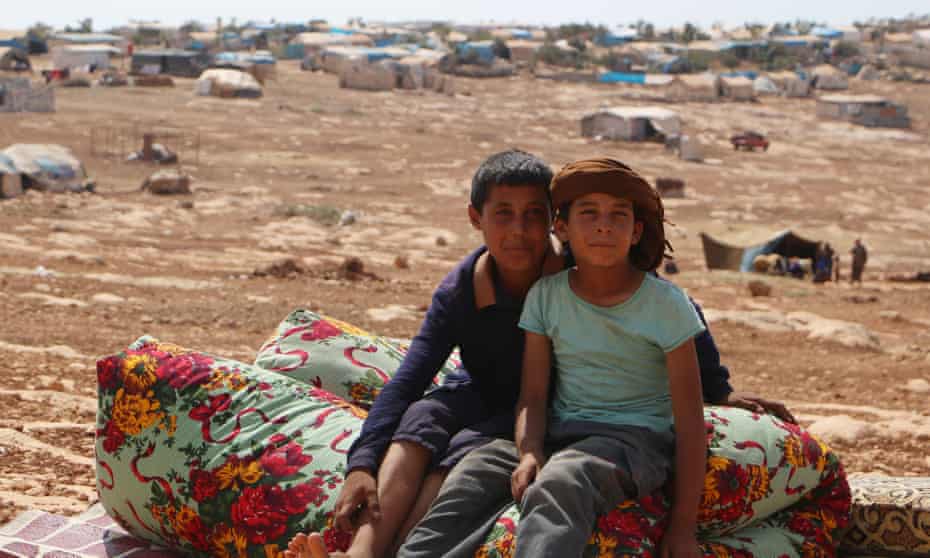 Waiting for the pro-Assad assault on Idlib: “Many will die, many will flee, many will be buried under the rubble. It happened before. It will happen again.”

The first thing that struck me when I saw Idlib, the rebel-held province in northwestern Syria, in April last year was how green the country was. Olive and cherry trees lined the pockmarked roads leading from the Turkish border down to the province’s towns. Smoke rose in the distance in the aftermath of an airstrike or an exploding shell, and the buildings in most towns were scarred by blows from the sky.

I had traveled to Idlib to report on the chemical attack in the town of Khan Sheikhoun by President Bashar al-Assad’s regime, which killed over 80 people. I remember watching Abdulhamid al-Yousef, a father of two, hold his son and daughter before their burial; they were poisoned by the very air they breathed. According to the independent United Nations Commission of Inquiry, President Assad’s air force was responsible for the chemical gas attack, which killed Mr. Yousef’s wife and children, along with several other relatives.

A friend trying to comfort the distraught Mr. Yousef told him a story about “al-sirat,” a bridge that Muslims believe people must cross on the day of judgment. Al-sirat is believed to be thinner than a hair and leads to the gates of paradise. “On the day of judgment, those who lose their children and bear the tragedy with forbearance will be reunited with them,” the friend said. “Their children will have wings and will fly them across al-sirat to the gates of paradise.”

The moment still gnaws at me.

Over the past week, a gathering storm pointed to an impending assault by Mr. Assad’s regime and his Russian patrons on Idlib, with aid agencies warning of a humanitarian catastrophe that could drive new waves of refugees into neighboring Turkey. Russian airstrikes have already killed 13 people in Idlib. Mr. Assad’s forces are shelling the area, and his Iranian and Russian allies have chosen dehumanizing language and described the militants in Idlib as “this festering abscess that needs to be liquidated”.

Idlib is billed as the endgame in a war that has claimed more than half a million lives, displaced half of Syria’s population, driven millions into “safe” refuge abroad and triggered the xenophobic, populist explosion in Europe and beyond that exposed the fragility and hollowness of the vaunted global liberal order.

But Idlib is also the last refuge of some three million people. Hundreds of thousands living in the province were already displaced from their homes elsewhere in Syria by the steady march of Mr. Assad’s army and allied sectarian militias, backed by the remorseless bombing campaign carried out by the Russian Air Force.

Many will die, many will flee, many will be buried under the rubble. It happened before. It will happen again. We know it. We are complicit in our knowledge, indifference and inaction.

Idlib has turned into a microcosm where all the regional and international power brokers have claimed a stake, where all the forces that gave rise to and were birthed by Syria’s traumatic uprising are struggling in a catastrophic battle whose price, as usual, will be paid for by innocent civilians.

In refugee camps, at memorial services, in the rubble of bombed-out buildings, Syrians shared their stories, wanting to be heard. Sometimes they stopped talking during our conversations because they recognized the futility of it all. I often shared their frustration but continued reporting in order to create a record, hoping that nobody would say we didn’t know.

Syria taught me that knowledge does not lead to accountability. The families who were buried under the rubble will not get justice. Those who had to start over in foreign lands and were vilified for having the temerity to want to raise their children in safety won’t either. Neither will those who drowned on the way to European shores, nor will those who were besieged and starved to within an inch of their life get justice.

The parents whose children killed by sarin gas appeared covered in small, white shrouds on newspaper front pages won’t either. And justice will remain elusive for the mother whose feet bled searching for news of her son in the dungeons of Syria’s security services. Many Syrians I spoke to often wondered why the world did nothing to help them, why the West — a substitute term for the United States — stopped at offering mere words, why every act of horror evoked mere outrage and posturing at the United Nations Security Council.

The Help That Never Came

Americans often have little awareness of just how pervasive their country and way of life is in the Middle East. An activist in Raqqa described to me living under the Islamic State rule by referencing the American television series “The Blacklist” to explain how humans adapt to criminality.

Many lives have been changed, upended or destroyed by the direct or indirect reach of the United States, whether they were Yazidis saved by the United States’ intervention in Iraq, or were buried under the rubble by the American-led coalition’s airstrikes in Mosul and Raqqa.

The story many Americans believe in and propagate about their country is one molded in the Cold War ethos of spreading liberalism and freedom, a story that people in desperate straits sometimes clung to. After the 2013 chemical attack by Mr. Assad’s regime in Syria, which killed over a thousand civilians, many Syrians hoped the United States would enforce President Barack Obama’s red line. Even later, in 2016, Aleppo vainly waited for American help that never came.

The prolongation of the war led to the rise of extremist groups the United States is now fighting in Syria. When Ghouta, a suburb of Damascus, came under siege this year, the Syrians were no longer waiting for the world to help.

The narrative of America’s liberalizing fiction is a convenient one because the United States not only accepted the prevalence of totalitarian dictators in the region and elsewhere, but also abetted and fostered them in the pursuit of its interests. I did not know what to say to the Syrians who wrote to me every day while under siege, hoping that intervention by a benevolent force would put an end to their suffering.

The United States intervened in Syria to protect its “national security” interests, not to protect civilians. America intervened and killed a lot of civilians in its single-minded pursuit of the Islamic State terror group, a symptom of the region’s ailments, rather than its cause. Red lines were breached, the perfunctory calls for the dictator to step down were made, and the thirst for moral outrage was quenched, as people continued to die.

Half a million people died, and the only justice they can hope for is in the afterlife, when the scales, they believe, will be balanced.

It Was, or It Wasn’t

I repeatedly find myself thinking of the graveyard near Mr. Yousef’s home in Khan Sheikhun, where I stood after speaking with him, staring at the freshly dug graves of his wife and children, at the cinnamon soil. Those graves remain a testament to the fiction of the international community and international law.

Arab fairy tales start with a line: Kan ya ma kan. It was, or it wasn’t. The myth is yours to believe in or to deny.

Kan ya ma kan, there was an international community.

Kan ya ma kan, there were values of justice and decency.