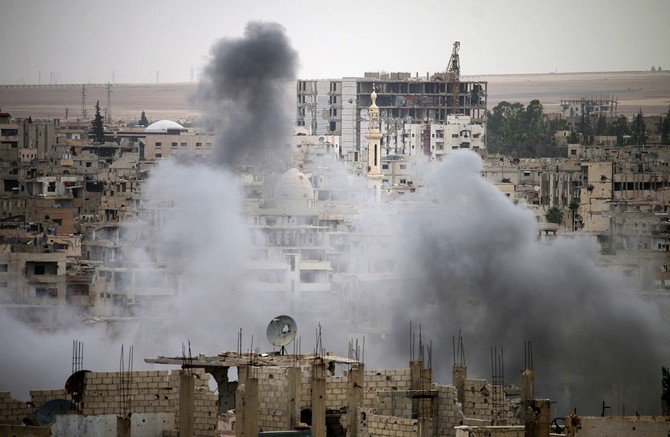 Frustrated so far in its ambitions for a ground offensive in southern Syria, the Assad regime’s army shelled northern Dara’a Province on Friday, killing at least six people.

The army shelled the towns of al-Hara and Kafr Shams in the first hour of Eid al-Fitr, the celebration at the end of Ramadan. Prayers for the occasion were cancelled because of the assault.

The death toll was the highest in the area since the US and Russia agreed a “de-escalation zone” last July.

Following the recapture of the East Ghouta area near Damascus in April, the Assad regime has indicated that its next target will be southern Syria, near the Jordanian border and the Israeli-occupied Golan Heights. Bashar al-Assad reiterated Wednesday, “We are giving the political process a chance. If that doesn’t succeed, we have no other option but to liberate it by force.”

But Israel has threatened intervention if Hezbollah or any Iranian-supported militia are involved in the offensive. After discussions with the Israelis, Russian Foreign Minister Sergey Lavrov said at the end of May that all “non-Syrian forces” must leave the area and that a political process should pursued for rebel withdrawal.

The US reissued a statement on Thursday that its forces will “take firm and appropriate measures” in response to any violations of the de-escalation zone. The State Department said that, as a member of the UN Security Council, Russia “is duly responsible” to “use its diplomatic and military influence over the Syrian government to stop attacks and compel the government to cease further military offensives”.

Israeli Prime Minister Benjamin Netanyahu maintained his warning against any Hezbollah or Iranian presence in the south, reiterating that Israel will bomb the bases of foreign militias across the country.

Russia has shown its concern over the latest report by international inspectors pointing to the Assad regime’s attacks with sarin nerve agent on civilian areas.

On Wednesday, the Organization for the Prohibition of Chemical Weapons concluded that chlorine and sarin were “very likely” used in bombing of Latamineh in northern Hama Province on March 24 and 25. The attacks were the first of three attacks with sarin within two weeks, followed by strikes on March 30 on Latamineh and then on April 4 on Khan Sheikhoun in Idlib Province, killing about 90 people and wounding hundreds.

Significantly, Russia’s Foreign Ministry — which in the past has tried to use diversions such as the White Helmets civil defense — directly attacked the OPCW on Friday. Spokeswoman Maria Zakharova said:

It becomes obvious already after the first reading of the report that the methods of the [OPCW] mission’s work are still far from the requirements for gathering and analyzing information on the alleged use of chemical agents that are set forth in the Convention on the Prohibition of Chemical Weapons and the OPCW regulatory documents.

Zakharova did not discuss the specific evidence in the report, drawn from environmental samples and interviews with victims, first responders, and witness. Instead, she complained about the conclusions “more than a year” after the attacks and tried to claim a conspiracy — without any support — with a meeting of “Western states” at The Hague in The Netherlands on June 26-28.