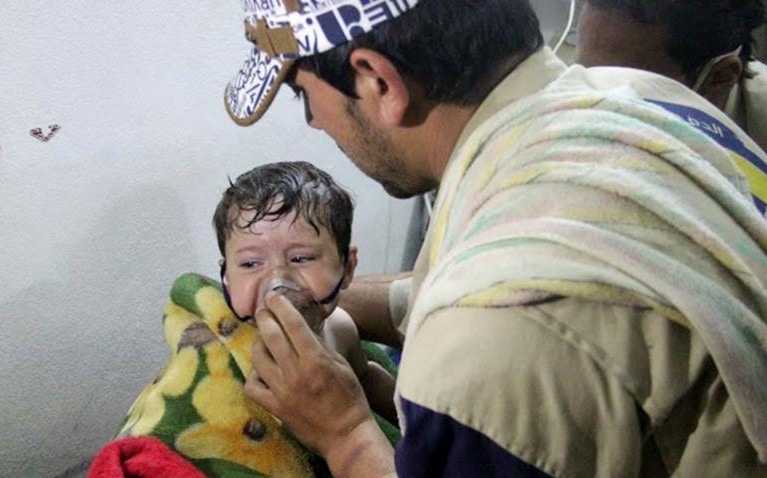 International inspectors have concluded that another sarin attack in northwest Syria was “very likely” in March 2017, pointing to the Assad regime as responsible.

The assaults, on March 24 and 25 on Latamineh in northern Hama Provinice, were the first of three attacks with sarin within two weeks. The OPCW has already found that the nerve agent was used on March 30 on Latamineh and then on April 4 in the deadliest strike, killing about 90 people in Khan Sheikhoun in Idlib Province.

The report said chlorine was “very likely” used along with the sarin. Witnesses estimated up to 30 casualties from the March 24 attack, including two families sleeping in caves and several men on farmland outside the city. The March 25 strike on Lataminah hospital caused 33 casualties, including 15 staff. Three people were killed including Dr Ali Darwish, an orthopedic surgeon who was operating at the time, died on the way to treatment at another hospital.

While the inspectors cannot assign responsibility, the report points to the Assad regime with testimony from witnesses that the chemical munitions were dropped by aircraft. Environmental samples contained hexamine and HFP both of which have been indicators of the Assad regime’s sarin production and use.

Inspectors interviewed health workers, first responders, victims, and other residents. The findings from the testimonies and samples were supported by “subsequent cross-reference and corroboration of the evidence”. 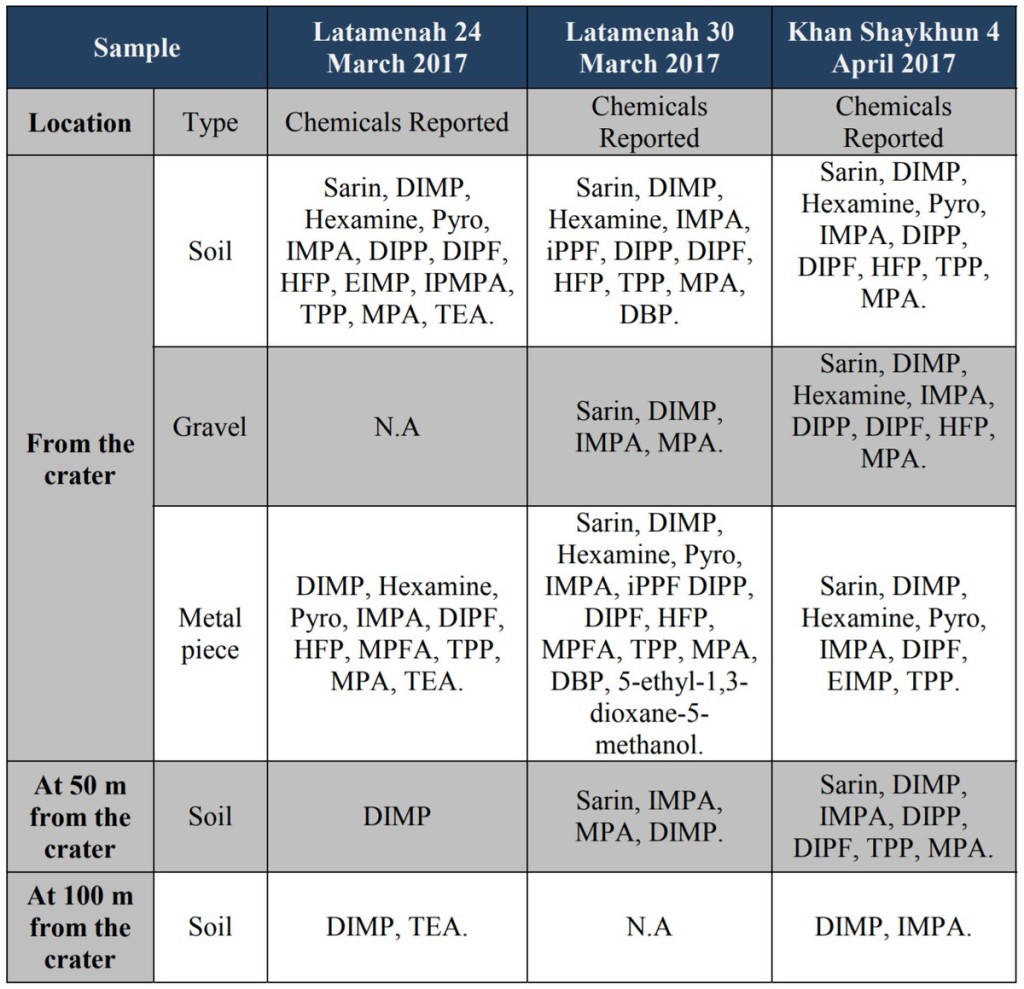 In 2015 the UN Security Council gave the OPCW authority, through a Joint Investigative Mechanism, to assign responsibility. The JIM subsequently found the Assad regime culpable for three chlorine assaults and the ISIS for the use of mustard agent.

However, after the JIM found that the Assad regime carried out the sarin attack on Khan Sheikhoun, Russia vetoed the extension of its mandate by the Security Council. Moscow has continued to block any renewal,, as it trieS to prevent attribution of blame for the Assad regime’s April 2018 chemical attacks on Douma near Damascus.

The OPCW’s report on those attacks, which forced the final rebel surrender in the East Ghouta area, is due later this month.

On Tuesday, the UK said it will make another attempt for restoration of the JIM:

UK has tabled draft decision aimed at strengthening the ban on chemical weapons. We propose the @OPCW begins attributing responsibility for chemical weapons attacks in Syria. We also want action to support states to address the chemical terrorism threat.

Russia is already moving to block any new authority to assign blame. Moscow’s Ambassador to the UN Vassily Nebenzia said that OPCW cannot carry out the attribution unless it comes through the UN Security Council, where Russia can wield its veto to prevent any mandate covering responsiblity for attacks.

The Trump Administration has lifted its freeze on funding for the White Helmets civil defense organization.

Last month the rescuers were caught up in Donald Trump’s suspension of $200 million of US support for reconstruction and development efforts in areas of northern Syria taken from the Islamic State. Trump ordered the halt as part of his call, blunted by the Pentagon, for the withdrawal of US forces from the country.

A statement on Thursday from State Department spokeswoman Heather Nauert said Trump had authorized the release of $6.6 million from the Department and the Agency for International Development to support the “continuation of the vital, life-saving efforts of the Syrian Civil Defense”.

Leading Kurdish Politician: We Hope Assad is Serious About Talks With Us

A leading Syrian Kurdish politician has expressed hope that Bashar al-Assad is serious about negotiations with the Syrian Kurdistan Democratic Union Party (PYD) and its YPG militia.

Aldar Xelil said there had been no steps yet toward talks, mentioned by Assad last month, but said an agreement would be a “historical turning point”: “We don’t know the extent of their seriousness or preparation for this, but we hope these statements reflect serious intentions.”

The PYD has eclipsed other Syrian Kurdish factions because of the YPG, which has led the US-supported Syrian Democratic Forces as they captured territory from the Islamic State in the north and east of Syria, including oil and gas fields, farmland, and water resources.

The SDF’s military advance has led to de facto Kurdish control after decades of seeking autonomy from Damascus, a claim to led to a violent suppression of the Kurds in 2004.

Assad said last month that the regime is opening “doors for negotiations” with the SDF, but also warned regime forces will recapture areas where the SDF is backed by about 2,000 US troops if the talks are not successful.

Earlier this week Russia’s Defense Ministry put out the propaganda line that the “Free Syrian Army” — which is not present in eastern Syria — and the US are preparing a “false flag” chemical attack in Deir ez-Zor Province.

Similar Russian claims have been used to cover Assad regime’s chemical attacks amid offensives on Aleppo city in late 2016 and on the East Ghouta area near Damascus this spring.

Xelil, co-chair of the Movement for a Democratic Society (TEV-DEM), which includes a number of Kurdish parties and is led by the PD, said Assad’s threat of force was regrettable and “all efforts must be focused on how to develop the peaceful option” for a decentralized “democratic Syria that encompasses…the Kurdish people and other groups”.

He continued, “We don’t want get ahead of things and propose matters so they become like conditions…The most important thing is accepting the principle of negotiations.”

The issue of autonomy is further complicated because Turkey considers PYD to be part of the Turkish Kurdish insurgency PKK, and because PYD and TEV-DEM are opposed by other Kurdish groups.

Bashar al-Assad has tried to maintain the option of a military offensive to retake opposition-held southern Syria, despite Israeli warnings and possible limits by his essential ally Russia.

“We are giving the political process a chance. If that doesn’t succeed, we have no other option but to liberate it by force,” Assad said in an interview with Iran’s al-Alam on Wednesday.

After reoccupying East Ghouta near Damascus in April, the Assad regime pointed to attacks on Quneitra and Dara’a Provinces, along the Jordanian border and the Israeli-occupied Golan Heights. But Israel indicated it would intervene if Hezbollah and/or Iranian-supported militia were involved. Russia, with its cooperative arrangement with the Israelis since September 2015, called for the withdrawal of all “non-Syrian forces” from the area and pointed to a political process to obtain rebel withdrawal.

The situation is further complicated by last July’s US-Russian declaration of a “de-escalation zone” in the southwest, although Russia has broken its de-escalation declarations in the past, including those for northwest Syria and East Ghouta.

Assad alluded to the obstacles for the regime’s insistence that it will retake “every inch” of Syria:

There are no concrete results for a simple reason which is Israeli and American interference; for they put pressure on the terrorists in that area in order to prevent reaching any compromise or peaceful resolution….

Contacts are still ongoing between the Russians, the Americans, and the Israelis.

He pushed back on Israeli Prime Minister Benjamin Netanyahu’s demand for the withdrawal of all Iranian military personnel from the country, saying pro-Assad foreign forces will remain until “Hezbollah, Iran, or others believe that terrorism has been eliminated. Hezbollah is a basic element in this war — the battle is long, and the need for these military forces will continue for a long time.”

Assad added that, while Iran does not have any bases of its own in Syria, “[If there is] a need for Iranian military bases, we will not hesitate.”