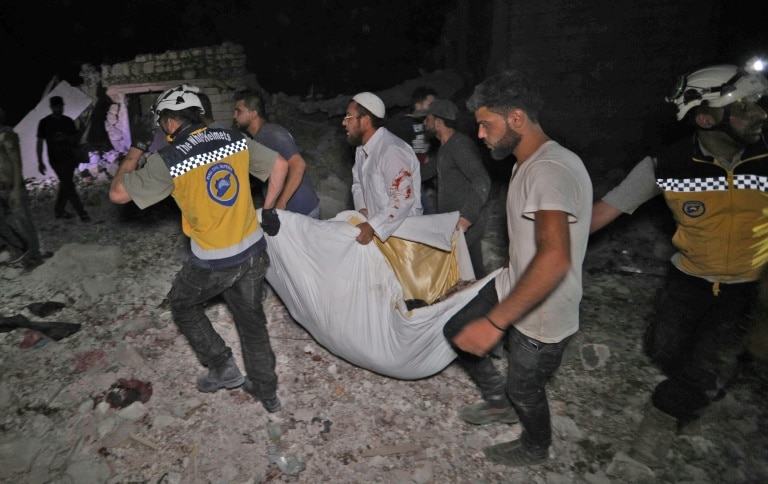 Russia continues to deny it carried out strikes

UPDATE 1730 GMT: Pro-Assad strikes continued on Idlib Province on Monday. Among the sites struck was the hospital in the town of Binnish, the third medical facility damaged since last Thursday by the attacks.

UN Secretary General Antonio Guterres has called for an investigation into pro-Assad airstrikes that have killed more than 60 people and wounded scores in opposition-held northwest Syria since Thursday.

On Thursday a warplane — said to be an Su-25 warplane from Russia’s Hmeimim airbase by pro-opposition activists — fired four missiles on the town of Zardana in Idlib Province. At least 50 people were slain and more than 70 injured. The strike was a “double tap” operation, in which the jet bombed rescuers and residents trying to help casualties of the initial attack.

Over the weekend, rebels retaliated by firing on the regime enclaves of al-Fu’ah and Kafraya, reportedly with six Hezbollah fighters among those killed. Pro-Assad warplanes then bombed nearby areas and towns such as Taftanaz and Binnish, killing at least 10 people.

The Secretary-General expresses deep concern about the airstrikes that reportedly targeted the village of Zardana in northern rural Idlib on the night of 7 to 8 June, killing dozens including children. He calls for a full investigation into the attacks, especially allegations that there was also a second strike targeting first responders, to establish accountability.

Dujarric emphasized that Idlib was a de-escalation zone, declared by Russia, Iran, and Turkey last year. He called on the three countries to “uphold their commitments”: “[The Secretary General] calls for an immediate cessation of hostilities and urges all stakeholders to respect their obligations under international humanitarian law, including the protection of civilians and civilian infrastructure.”

Despite proclaiming the de-escalation zone, Russia has continued to bomb civilian areas across Idlib, using the pretext that the attacks are on “terrorists” who are not covered by the agreement.

Pro-Assad ground opertions have been checked since late January by a ring of Turkish observation posts around the province, but air attacks have continued.

The Russian Defense Ministry denied that it carried out last Thursday’s attack on Zardana, trying out the unsupported line that “fierce fighting” between rebels and “a large formation of the Jabhat al-Nusra terrorist organization” left civilians dead from artillery fire.

Rebels rebuffed the claim, noting that there was no fighting close to Zardana.

UN: Record Number of 920,000+ Displaced Between January and April

UN officials said on Monday that more than 920,000 people were displaced inside Syria from January to April 2018, a record for the 87-year conflict.

Panos Moumtzis, the UN regional humanitarian coordinator for Syria, told reporters in Geneva about the latest flights of civilians: “This was the highest displacement in that short period of time we have seen since the conflict started.”

The UN says 6.2 million people have been displaced inside Syria, with borders of neighboring countries closed. About 5.6 million Syrians are refugees in Lebanon, Jordan, Turkey, Egypt, and Iraq with more further abroad.

Moumtzis said most of the newly displaced have been forced flee by pro-Assad assaults on East Ghouta near Damascus and on Idlib Province in northwest Syria.

He warned of further displacements with ongoing assaults on Idlib (see above), with more than 2.5 million people now in the province: “With the Idlib situation, we may not have seen the worst of the crisis in Syria….We worry about seeing really 2.5 million people becoming displaced.”

The surge in displaced corresponds with the worst situation for aid deliveries during the conflict, with only 11% of intended assistance reaching its destination.

In related news, Turkey has completed construction of a 764-km (475 mile) concrete wall along its border with Syria.

Ankara launched the construction project in 2015 for a barrier along 826 of the 911 kms of the border. The modular walls consisted of seven-ton mobile blocks, two meters wide and three meters high, topped with a one-meter height of razor wire.

The first aid convoy in three months has reached Douma, the center of the East Ghouta region near Damascus that was recaptured by the Assad regime in April.

However, the regime reportedly refused to allow UN staff to accompany the delivery by the Syrian Red Crescent of the assistnance from the World Food Program.

Despite “liberating” East Ghouta after a two-month offensive with conventional and chemical attacks, the regime is continuing to maintain close control over the populace, with reports of forced conscription of men of military age and residents signing pledges not to criticism Bashar al-Assad and his officials.