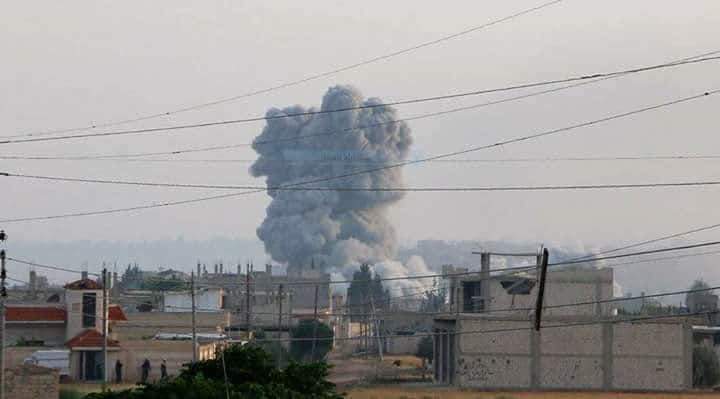 “Her Reports From Syria Are Crap” — The British Blogger Pushing Pro-Assad Disinformation
An Impending War Between Israel and Iran in Syria?

Trying to force another surrender agreement, pro-Assad forces stepped up bombardment of an opposition pocket in northern Homs Province on Monday.

Local sources said the Assad regime and its allies carried out more than 140 airstrikes while attacking on the ground near the town of Rastan and surrounding villages.

Horrific moments filled with fear and panic among unarmed civilians, after the aerial bombing of the city of Rustan in the countryside of Homs after the bombing of the Syrian regime forces on the city. pic.twitter.com/dFbgGgZzLb

The assault paused on Monday afternoon as Russian officers sought an agreement for capitulation and forced removals. Syrian State TV warned that the pause was the last chance before a further escalation in attacks.

The pocket, between the cities of Hama and Homs, has withstood siege, bombing, and ground assaults since October 2011, after the Free Syrian Army captured the area from the regime.

A regime minister said last week that the enclave would be the next target after the surrender of East Ghouta near Damascus.

Attacks are also continuing on northern Hama Province, outside the area overseen by Turkey alongside rebel forces:

The regime has agreed the surrender and forced removal of Hay’at Tahrir al-Sham fighters from an area south of Damascus, amid a 10-day assault.

State news agency SANA said on Monday that about 5,000 fighters and their families, will be evacuated in two stages to Idlib Province in northwest Syria.

Pro-Assad forces are continuing their air and ground attacks against the Islamic State in the Yarmouk camp, held by ISIS since early 2015 after it pushed out rebels.

HTS had positions in the neighboring towns of al-Hajar al-Aswad and Yalda.

SANA said that, at the same time, thousands of people will now leave the regime enclave of Kafraya and al-Fu’ah in Idlib Province.