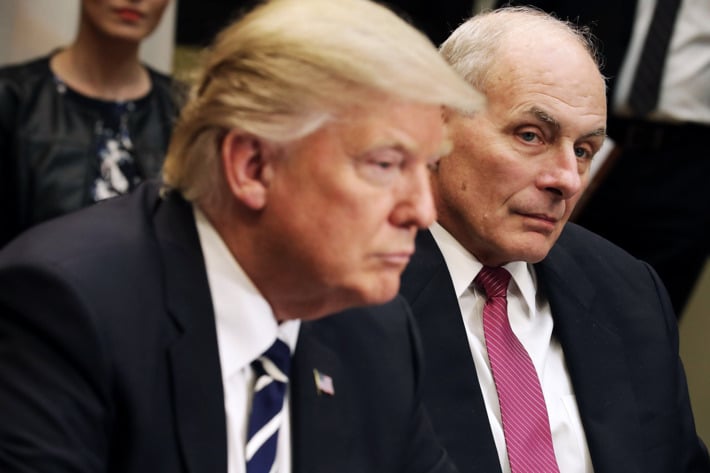 Chief of Staff John Kelly appears to be in danger of being pushed out or resigning, with a White House faction leaking to the media that he has been unprofessional and that Donald Trump has turned against him.

“Eight current and former White House officials” said Kelly repeatedly called Donald Trump “an idiot”, while portraying himself as an essential barrier against a Government breakdown.

The “idiot” remarks were reported to NBC News by four officials who said they witnessed the comments.

After publication of NBC’s article, Kelly said the assertions are “total BS”. He said in a statement:

I spend more time with the president than anyone else and we have an incredibly candid and strong relationship. He always knows where I stand and he and I both know this story is total BS. I am committed to the president, his agenda, and our country. This is another pathetic attempt to smear people close to President Trump and distract from the administration’s many successes.

But one of NBC’s sources, a “senior White House official”, explained: “He’ll say it and you think, ‘That is not what you should be saying.'”

The sources said Trump is aware of some though not all of Kelly’s comments.

There have been previous reports of Trump turning against Kelly and even that the Chief of Staff was about to be dimissed or resign. The episodes fed suspicions that an anti-Kelly faction in the White House — some observers have pointed to Trump’s son-in-law Jared Kushner and daughter Ivanka — is feeding the media.

That suspicion is reinforced by multiple passages in the NBC article.

The “idiot” remark takes its place in the portrayal of Kelly going behind the President’s back, on issues such as immigration.

Worried that Trump might weaken in a tough line, Kelly — who was Director of Homeland Security in the first six months of the Administration — said:

He doesn’t even understand what DACA [Deferred Action for Childhood Arrivals — the “Dreamers” program] is. He’s an idiot. We’ve got to save him from himself.

The sources also portray Kelly as a defender of Rob Porter, the senior White House aide who resigned after revelations of spousal abuse.

Three officials said that “Kelly wondered aloud how much more Porter would have to endure before his honor could be restored” and “questioned why Porter’s ex-wives wouldn’t just move on based on the information he said he had about his marriages”.

Some of the current and former White House officials reinforced the stories of Kelly’s imminent departure, saying they expect Kelly to leave by July, although others say it is anyone’s guess.

They portrayed Trump as weary with his Chief of Staff. “Kelly appears to be less engaged, which may be to the resident’s detriment,” said a “senior White House official”.

Kelly’s defenders in the NBC article project him as the man preventing impulsive Trump decisions:

In one heated exchange between the two men before February’s Winter Olympics in South Korea, Kelly strongly — and successfully — dissuaded Trump from ordering the withdrawal of all U.S. troops from the Korean Peninsula, according to two officials.

When he took over as Chief of Staff last July, Kelly was portrayed as the man to bring order to a chaotic White House. His position was further bolstered by the projection of a trio of former generals — alongside Defense Secretary James Mattis and National Security Advisor H.R. McMaster — as the bulwark because of Trump’s admiration of military officers.

But Kelly ran into immediate trouble with the furor in August over Trump’s effective absolution of white supremacist violence in Charlottesville, Virginia. As other controversies circulated and White House officials departed, Kelly’s position was further exposed when Trump forced out McMaster last month.

Either oblivious to the White House battles or trying to cover them up, Donald Trump vented his fury on Twitter after the NBC story circulated widely.

The Fake News is going crazy making up false stories and using only unnamed sources (who don’t exist). They are totally unhinged, and the great success of this Administration is making them do and say things that even they can’t believe they are saying. Truly bad people!

The White House is running very smoothly despite phony Witch Hunts etc. There is great Energy and unending Stamina, both necessary to get things done. We are accomplishing the unthinkable and setting positive records while doing so! Fake News is going “bonkers!”