Syria Daily: US to Keep Troops in Country 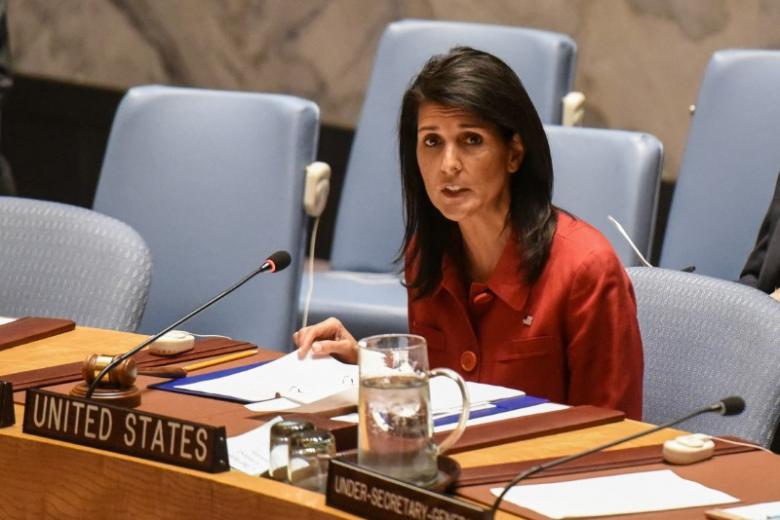 UPDATE 1900 GMT: Inspectors from the Organization for the Prohibition of Chemical Weapons are still being blocked by the Assad regime and Russia from reaching Douma.

OPCW head Ahmet Uzumcu told the Executive Council on Monday that the inspectors arrived in Damascus on Saturday and began meeting regime officials to “work out a plan for the deployment”. However, they are still being held in the Syrian capital, with the officials citing “pending security issues to be worked out”.

UPDATE 1730 GMT: This is the task faced by pro-Assad forces in overrunning Douma if a capitulation agreement had not been forced by the regime’s chemical attacks on April 7 — the rebel faction Jaish al-Islam and its “town under a town”:

Reversing Donald Trump’s position from less than two weeks ago, the US is maintaining its troop presence in Syria.

The US Ambassador to the UN, Nikki Haley, confirmed the ongoing deployment of about 2,000 personnel alongside the Kurdish-led Syrian Democratic Forces in the north and east of the country.

Speaking with Fox News on Sunday, Haley said the US aims are ensuring chemical weapons are not used in any way that poses a risk to US interests; defeating the Islamic State; and maintaining a vantage point on the operations of Iran, an ally of the Assad regime.

“[It is our goal] to see American troops come home, but we are not going to leave until we know we have accomplished those things,” Haley said.

Donald Trump had been declaring last month that he wanted to withdraw all US troops, asking Saudi Arabia for $4 billion in return. The Pentagon pushed back by leaking to the press that it would increase the number of personnel with the SDF.

The matter was settled on April 7 by the Assad regime’s chemical attacks on Douma near Damascus, forcing the capitulation of the opposition enclave. Seeing images of the victims on TV the following morning, Trump’s attention moved from withdrawal to a missile response against the regime.

President Emmanuel Macron of France, whose involvement and that of the UK were essential to Saturday’s strikes, said yesterday that he persuaded Trump to retain US personnel in Syria: “We convinced him it was necessary to remain there. We have complete international legitimacy to act in this framework.”

In another interview on Sunday, Haley said new sanctions on Russia, over its support of Syrian President Bashar-al Assad, will be announced today.

Haley said the statement will be made by Treasury Secretary Steven Mnuchin: “They will go directly to any sort of companies that were dealing with equipment related to Assad and chemical weapons use.”

Haley ruled out any direct talks between the US and Assad, saying the regime is not “worthy” of this.

The Kremlin summarized remarks to Iranian President Hassan Rouhani: “Vladimir Putin, in particular, stressed that if such actions committed in violation of the U.N. Charter continue, then it will inevitably lead to chaos in international relations.”

In a contrasting statement, an Arab League summit called for examination of the chemical attacks and condemned Iranian interference:

The Assad regime has renewed conventional bombing and shelling of northern Homs Province, a day after the US-UK-French strikes to deter chemical attacks.

Opposition activists reported about 40 airstrikes before noon Sunday, as well as fire from heavy artillery and machine guns. They said two civilians were killed and a number were wounded.

Pro-opposition analysts warned of a ground offensive by pro-Assad forces to try and capture the Rastan pocket, held by the opposition since February 2012.

Rebels said they destroyed four tanks and a BMP armored vehicle, as they forced attackers to withdraw.

More than 28 airstrikes targeted the civilians houses in northern Homs countryside all that in 11 hours.
We worry fromdoing the shelling campaigns again against the civilians to push them to leave their homes, they are using the displacement to make the demographic changing. pic.twitter.com/uIK07OoJFd