Syria Daily: Report — About 800 Sick and Wounded Moved From Douma 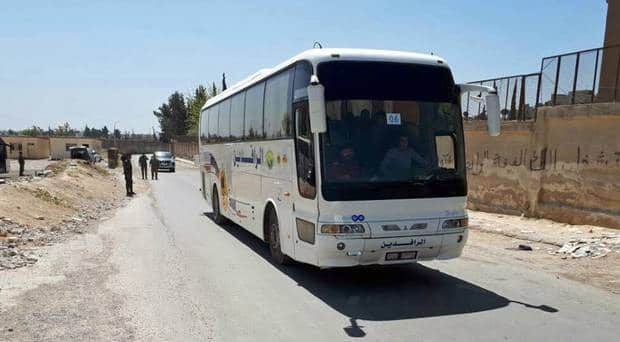 Pro-opposition sources report that about 800 sick and wounded people have been moved from Douma, the last town in the opposition enclave of East Ghouta near Syria’s capital Damascus.

The transfer is the outcome of days of talks between Jaish al-Islam, the rebel faction in Douma, and Russian officials. It follows more than five years of siege in which the Assad regime refused to allow seriously ill people out of East Ghouta for treatment.

Syrian State media and pro-Assad outlets, eager to declare a complete victory in the conquest of the oppostion area, have presented the evacuation as a surrender agreement. However, Jaish al-Islam officials said discussions are ongoing.

A regime military official confirmed that the surrender has not been obtained, saying some fighters were holding out and the army would use force unless they accepted capitulation: “They will all have to agree to the settlement in the end.”

A two-month pro-Assad offensive, enabled by Russian airstrikes breaking a de-escalation agreement and defying UN calls for a ceasefire, has killed more than 1,700 people, wounded thousands, and displaced tens of thousands. All other towns in East Ghouta, held by the opposition since 2012, have been forced to surrender.

Footage of pro-Assad forces — and imwages of possible looting — amid devastation in Arbin:

The US military has pushed back on Donald Trump’s sudden declaration, “We’re getting out of Syria”, with leaks to the media that it is considering the dispatch of more troops into the north of the country.

Trump made his statement during a speech in Ohio last Thursday, the same day that two troops — one American, one British — were killed by an improvised explosive device in Manbij in eastern Aleppo Province.

The US military is continuing to back the Kurdish-led Syrian Democratic Forces in Manbij, even as Turkey calls for their withdrawal east of the Euphrates River.

“Several US defense and administration officials” said the military has been working on plans to send dozens of additional troops. They said the work was being done before Trump’s address last week.

Two civilians have been killed and “many others wounded” by regime airstrikes on the marketplace in Ariha in Idlib Province in northwest Syria.

2 civilians have been killed and many other wounded by Assad regime airstrikes on the marketplace in Ariha city, rural Idlib. pic.twitter.com/VKQsGrFLhS

Russia and the regime have renewed attacks after a relative lull while they concentrated on the takeover of East Ghouta near Damascus. Strikes over the weekend casued scores of casualties in northern Hama and Idlib Provinces.

Over the winter, a pro-Assad offensive — enabled by Russian aerial operations violating a de-escalation agreement — reclaimed part of southeast Idlib before the advance was halted with redeployment to East Ghouta.

2 civilians were killed, and 7 others injured so far, after brutal air raids on the popular market in #Areha City in #Idlib contryside. @SyriaCivilDefe teams worked to retrieve the victims, and continue the rescue operation. pic.twitter.com/EbWTMd37qI

The pro-opposition Zaman al-Wasl, citing “well-informed source”, says about 200,000 Iranians — most of them Revolutionary Guards — have obtained Syrian passports in the past few months.

The “Damascus-based source” said the Department of Immigration and Passports issued the documents after a confidential order by General Maher al-Assad, Bashar al-Assad’s brother.

The opposition has claimed that the Iranians and regime are pursuing demographic change, through forced removals and seizure of property in areas such as south Damascus.