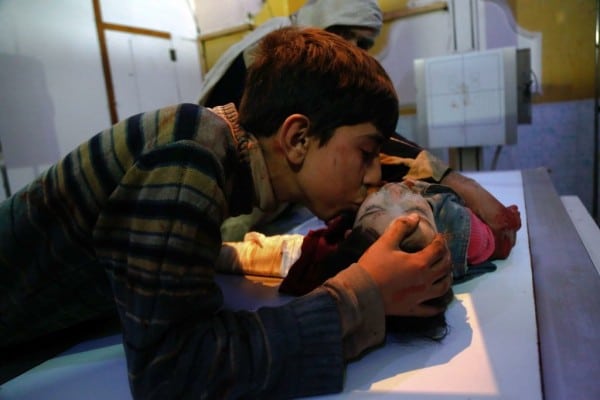 Bahira al-Zarier and Tariq Adely of Syria Direct talk to some of the residents of East Ghouta, near Syria’s capital Damascus, who have been beseieged, bombarded, and forcibly removed into submission to a pro-Assad offensive:

Dr. Waleed Awatah, 43: An anesthesia technician and former director of Resurrection Medical Center in Zamalka. Originally from Jobar, but fled his home to Zamalka in the summer 2017. Left Ghouta on Monday with his wife and five children.

What can I say? My heart is broken. There is nothing so cruel as goodbye.

We will miss Ghouta’s soil, its water and its breeze. We will lose all memories of our childhood and our youth. We will lose the graves of the martyrs, who remain as we depart. Our spirits will remain in Ghouta though our bodies may be far away.

Everything we might remember has been wiped away as the trees burned and the flowers withered. When the memories do return, it will be as a pain in our hearts. It is better not to remember a thing. That would only be torture.

I visited Jobar today and walked through the rubble. I said goodbye to my destroyed home. I went to Arbin and to all the other areas of the central sector.

Umm Muhammad, 35: A nurse who worked in the Resurrection Medical Center in Zamalka. Two of her four children died in a bombing on Zamalka last month. Left Ghouta on Monday with her husband and two surviving children.

Last month, two of my children — Muhammad and Osama — were martyred, killed in a bombing. I cried my heart out for them, and that pain will be with me for the rest of my life.

But when the evacuation began, my sadness was even greater. I lost my home and my children. We had endured everything so we could stay on our land.

I feel like any mother who has lost a child. My dignity is all I have left in this world. That is why I choose to leave, and not join hands with those who killed my children. I will never forget how Bashar al-Assad and the Russians destroyed our homes and killed our children while the world stood by.

I bid farewell to Zamalka, its neighborhoods and streets, saying: “Do not forget us. Remember the children born and raised here, who sacrificed everything just so that they could stay with you.”

All of Zamalka is grieving. Mothers are saying goodbye to their sons, who [are leaving] so as not to be detained by the regime. Siblings bid each other goodbye.

I will miss everything here—the trees, the breeze. I will miss my children’s graves, which I must leave behind. They were taken from me in life, and now in death.

I visited my children’s graves to tell them what happened. I asked my sons to forgive me for leaving them behind in Zamalka. I told them they are blessed to remain entombed in this earth. Stay here, as witnesses.

I place my hope in God that we will return, and that the safety that we once had in Ghouta will return as well. A return is inevitable, because the generation that lived through hunger and the bombings will not accept life under a murderous government and all of its injustices.

Our children will not forget the days we lived through in Ghouta and our expulsion. They will return victorious, God willing.

Muataz Sameh, 27: From Hamouriya but fled to the nearby town of Ein Tarma as government forces advanced two weeks ago. Married with one child. Worked as a nurse in a field hospital in Hamouriya. Left Ghouta on Monday.

I did not say farewell to Hamouriya. The regime did not give me the chance. We ran as soon as the bombing stopped.

When I came to Ein Tarma, I honestly did not think there would be an evacuation. I thought that the factions would take back what they had lost. The evacuation was a shock.

Ein Tarma is also my land. It is filled with my friends and relatives. I was here when the evacuation decision came out, and I have been crying ever since.

Leaving, it is as though I have died.

I will miss my home. I will miss my mother and my sister, who have left for the shelters [in Damascus]. I have heard nothing from them, no news to console me.

I will remember my brother, who died on the frontlines one week ago, and my friends who died in the bombings. I will remember the lives we lived, our gatherings and our peaceful protests.

And it will be impossible to forget what this regime has done to us.

My mother comes from Ein Tarma. I went to her father’s house with my uncles. I said goodbye to the destroyed house amidst the rubble. I found a few photos of my grandfather and my mother and took them with me.

I have hope in God, but sadly I don’t have hope that we will return to Ghouta after all the killing, destruction and hunger that I have seen here.

Something has died inside us. We are leaving, running away from the reality that the regime won and we lost. I should have died before leaving. It would be more merciful.

Abu al-Baraa al-Arbini, 26: A fighter with the Free Syrian Army faction Failaq al-Rahman. Married with two children and from the town of Arbin. Scheduled to leave on the final convoy out of East Ghouta’s central sector.

I was born in Arbin, and no other place in the world will ever be as beautiful to me. I will say goodbye with tears, kissing the ground and swearing to God to return.

The evacuation feels like a dream but it is reality, the reality that civilian lives needed to be saved. Assad and his allies used a scorched earth campaign to defeat us and to expel us from our land. Leaving is a tortuous and traumatic surrender.

The night before the evacuations began, I did not sleep. I walked the streets and neighborhoods of my town, wishing time would stand still.

Leaving Ghouta is a huge loss, and there will be no hope of returning if the course of the revolution is not set right, if the factions do not unite.

We gave everything we could, but all of the fear, bombings, destruction and hunger just ended with us leaving. I am crushed.

I said goodbye to my mother and my relatives who chose to stay in Ain Tarma. We’re not sure whether to say “see you later” or “goodbye forever”. These goodbyes are harder than dying.

I said goodbye to the streets, the trees, the breeze and even the rubble. I will remember everything, down to the stones.

I will remember the martyrs who sacrificed themselves for the sake of the revolution. We ask ourselves if they would forgive us for accepting an evacuation and handing over our land.

Hope is the only way to bear leaving. A seed of hope must remain in each person so the revolution can live on. If the hope in us dies, then the revolution dies with it—that is something we can’t possibly accept.