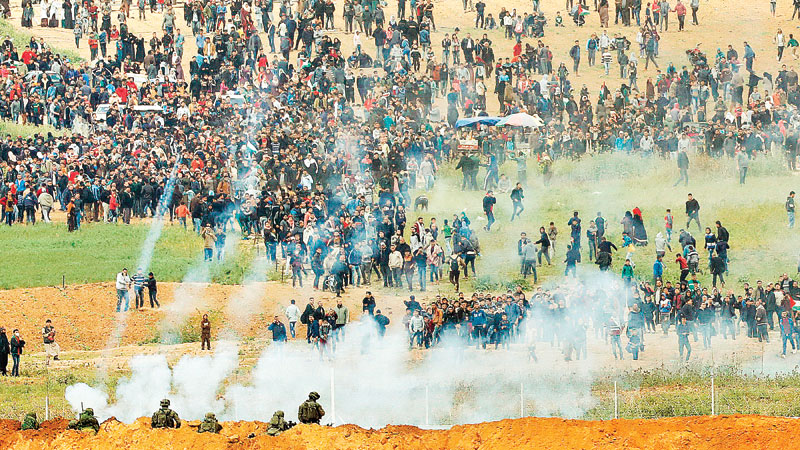 Human Rights Watch issues a report on last Friday’s use of force by the Israeli military against Palestinian demonstrators in the “Great March of Return” protest on the Gaza border last Friday:

Senior Israeli officials who unlawfully called for use of live ammunition against Palestinian demonstrations who posed no imminent threat to life bear responsibility for the killings of 14 demonstrators in Gaza and the injuring of hundreds on March 30, 2018.

Both before and after the confrontations, senior officials publicly said that soldiers stationed along the barrier that separates Gaza and Israel had orders to target “instigators” and those who approach the border. However, the Israeli government presented no evidence that rock-throwing and other violence by some demonstrators seriously threatened Israeli soldiers across the border fence. The high number of deaths and injuries was the foreseeable consequence of granting soldiers leeway to use lethal force outside of life-threatening situations in violation of international norms, coupled with the longstanding culture of impunity within the Israeli army for serious abuses.

“Israeli soldiers were not merely using excessive force, but were apparently acting on orders that all but ensured a bloody military response to the Palestinian demonstrations,” said Eric Goldstein, deputy Middle East director at Human Rights Watch. “The result was foreseeable deaths and injuries of demonstrators on the other side of a border who posed no imminent threat to life.”

“The Orders Are to Use A Lot of Force”

Israel and Egypt maintain a heavily secured border around the 40-kilometer-long, 11-kilometer-wide Gaza Strip. Since Israel withdrew its permanent ground troop presence and civilian settlements from the Gaza Strip in 2005, it has maintained a “no-go zone” on the border that restricts access to about 17 percent of Gaza’s territory, including a third of its agricultural lands. Nearly 2 million Palestinians, including 1.3 million refugees, live in Gaza. The vast majority are unable to leave, including to the West Bank, due to sweeping Israeli and Egyptian restrictions on movement. Israel’s closure policy also heavily restricts the flow of goods into and out of Gaza.

In the days ahead of planned demonstrations to mark Land Day, held annually on March 30 to highlight the dispossession of Palestinians over the years, Israeli officials repeatedly proclaimed their intent to fire on “instigators” and those approaching the border fence. In interviews given on March 28, the Israel Defense Forces chief of staff, Lt. Gen. Gadi Eisenkot, announced that he would deploy 100 snipers to the Gaza border area to block “mass infiltration” or damage to the border fence, saying that, “The orders are to use a lot of force.” On March 29, Prime Minister Benjamin Netanyahu’s Arabic spokesman posted a video of a man shot in the leg, stating, “This is the least that anyone who tries to cross the security fence between Gaza and Israel will face.” On the morning of March 30, Defense Minister Avigdor Lieberman tweeted in Arabic that, “Anyone who approaches the border puts his life in jeopardy.”

Organizers of this year’s Land Day demonstrations said they would also affirm Palestinians’ internationally recognized right of return. Most of the thousands who participated in Gaza stayed in tent encampments, due to remain in place until May 15, the 70th anniversary of the Nakba (Arabic for “catastrophe”), the displacement of Palestinians that accompanied the founding of the Israeli state. The tent villages were pitched at various points about 500 meters inside the border.

While most of the people in the tent villages did not approach the border, groups of mostly young men did so, some throwing stones, and, according to the IDF, “Molotov cocktails” (improvised gasoline bombs). Israeli forces directed fire at these men, killing 14 and injuring 1,415—758 of them with live ammunition—according to Gaza’s Health Ministry. Rubber bullets and teargas injured others. The Israeli army disputes these figures, contending that the number of Palestinians injured by live ammunition was likely in the dozens.

Gaza’s Health Ministry noted it had received the bodies of two other men killed in unknown circumstances near Beit Hanoun in northern Gaza. Israeli authorities also announced they are holding the bodies of two additional men killed on March 30, who it claims were armed and aiming to carry out a “terrorist operation in Israel.”

Human Rights Watch spoke to doctors who treated patients at Shifa Hospital in Gaza City who said they had received 294 injured demonstrators on March 30, most with injuries to the lower limbs from live ammunition, and five who died, all with head and chest injuries.

As events unfolded in the afternoon, both the IDF spokesperson and Israel’s coordinator of government activities in the territories, Maj. Gen. Yoav Mordechai, tweeted that the army was firing on “main instigators”. The spokesperson added that, “Whenever there has been an attempt to damage the fence, we fired with precision, intensity and determination, exercising judgment.” Gen. Ronen Manelis, the chief army spokesman, told the New York Times that the operation aimed “not to allow the sabotage of military infrastructure and not to allow any mass crossing of the fence”.

While some protesters near the border fence burned tires and threw rocks, Human Rights Watch could find no evidence of any protester using firearms or any IDF claim of threatened firearm use at the demonstrations. The IDF spokesperson, in a tweet posted in the early morning of March 31, “Everything you need to know about the riots in Gaza today,” accused demonstrators of “hurling burning tires, throwing Molotov cocktails, and attempting to harm or destroy Israel’s security infrastructure.” It made no mention of Palestinians using firearms at the protests.

Footage of demonstrations published by the army includes no evidence of firearms. The army published a video purporting to show two men firing at Israeli troops on March 30, but noted that this took place in northern Gaza Strip, not on the eastern border where the Land Day demonstrations took place. No demonstrators can be seen in the video. To Human Rights Watch’s knowledge, the army did not report any injuries to soldiers.

A Violation of International Humanitarian Law

In the absence of armed hostilities, in which international humanitarian law applies, the use of force in Gaza is governed by international human rights law. While security forces may use force under applicable international law to prevent unauthorized crossing of borders, Israel has presented no information that any threat at the border required a response in which the use of military force was necessary, such as an attack by armed combatants. The United Nations Basic Principles on the Use of Force and Firearms by Law Enforcement Officials hold that security forces shall “apply non-violent means before resorting to the use of force and firearms,” and that “whenever the lawful use of force and firearms is unavoidable, law enforcement officials shall: (a) Exercise restraint in such use and act in proportion to the seriousness of the offence and the legitimate objective to be achieved; (b) Minimize damage and injury, and respect and preserve human life”. Furthermore, “intentional lethal use of firearms may only be made when strictly unavoidable in order to protect life”.

The Israeli government has not shown that the demonstrators throwing rocks or Molotov cocktails posed a grave threat to the well-protected soldiers deployed on the other side of the border fence, nor has Israel claimed that any Palestinian crossed the border on March 30.

Human Rights Watch reviewed footage it believes authentic based on an interview with the videographer that appears to show a demonstrator shot in the leg while praying and another video showing a man shot while throwing a rock. Other videos reviewed appear to show demonstrators shot while slowly walking toward the border empty-handed or holding only a Palestinian flag or retreating from the border. Interviews with six witnesses, including three journalists, indicated that soldiers shot at men who were in the area between the encampments and the fence but who posed no grave threat to anyone across the fence.

Entering a zone declared off limits should not be a crime considered punishable by death, Human Rights Watch said.

The Israeli army also has alleged that those killed included “10 known terrorists with track records of terror activity.” By making such claims, the military appears to be trying to justify otherwise unlawful killings in a law enforcement situation based on alleged past activity.

In 2017, Human Rights Watch documented that some senior Israeli officials encouraged soldiers and police to kill Palestinians in the West Bank they suspect of attacking Israelis even when they are no longer a threat.

On April 1, Lieberman said there will be no official inquiry into the March 30 killings and that the Israeli government will not cooperate with any international investigation. Both the UN Secretary General and the European Union have called for “independent and transparent investigation.” Both he and Netanyahu have commended the soldiers’ handling of the protests.

But under the UN Basic Principles, “In cases of death and serious injury or other grave consequences, a detailed report shall be sent promptly to the competent authorities responsible for administrative review and judicial control.” Israeli authorities have for decades failed to credibly investigate potentially unlawful killings by security forces and to hold violators to account for wrongdoing.

An army source told Haaretz on April 2 that, “We will continue to act against the demonstrators in Gaza as we acted last Friday.” With more demonstrations planned in coming weeks, the Israeli government should recognize that, even in the absence of serious domestic oversight, officials who order unlawful lethal force may become subject to prosecution abroad as a matter of universal jurisdiction or in international judicial forums.

“Praising the army’s handling of the March 30 events and saying there shall be no inquiry into how Israeli soldiers gunned down 14 protesters across a fence says much about how cheaply Israeli authorities view the lives of Palestinians in Gaza,” Goldstein said.