Syria Daily: Large Explosions at Regime Base Near Hama — But What Caused Them? 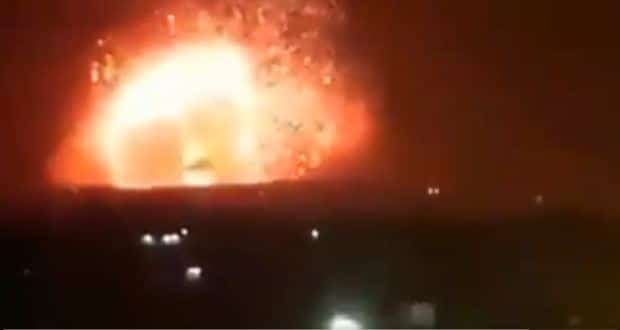 UPDATE 1430 GMT: Bashar al-Assad has tried to express defiance after last night’s attack on one of his regime’s bases.

Meeting an Iranian delegation led by MP Alaeddin Boroujerdi, Assad said, “The fact that hostile countries have shifted to a stage of direct aggression, after the fiasco that has befallen their agents and tools, will only increase the Syrians’ determination to eliminate terrorism in all its forms, and uphold their sovereignty and their right to shape their own future.”

UPDATE 1355 GMT: The Assad regime has continued attacks on villages and towns in northern Homs Province, near the site of last night’s explosion at a regime base.

Opposition activists reported more than 40 barrel bombs, rockets, and shelling on areas including the key town of Rastan in the pocket. They said at least four civilians were killed and 20 others injured.

Pro-Assad forces have been trying for months to overrun the area, which is outside a de facto protected zone established in northwest Syria by Turkish forces alongside rebels.

Talks for a capitulation agreement with Russian officials have reportedly resumed this afternoon.

UPDATE 1320 GMT: A leading Iranian outlet said 18 Revolutionary Guards were killed in the explosition at the 47th Brigade base on Monday night.

The outlet said Iran’s “advisors” and Afghan, Iraqi, and Lebanese militia were positioned at the base, with training yards and weapons depots that were detonated by the explosions.

“An official from [the pro-Assad] regional alliance” — likely to be from Hezbollah — said the strikes hit a storage facility on the base, destroying 200 missiles and killed 16 people, including 11 Iranians.

#Syria: many Assad forces were killed last night along #IRGC affiliated forces in suspected #Israel|i airstrikes in #Hama prov. Some of them pictured. pic.twitter.com/jIo3AxZBXE

There were large explosions at an Assad regime military base in northwest Syria late Sunday, but the reason — and who exactly is stationed at the facility — is still being debated.

Syrian State media reported the blasts south of the city of Hama and in Aleppo Province at about 10:30 pm. “Syria is being exposed to a new aggression with some military bases in rural Hama and Aleppo hit with enemy rockets,” an army official said.

Reports said the targets were the 47th Brigade Base and a position near the Salhab area in northern Hama Province, and a location outside the Nayrab airbase in Aleppo Province.

Videos showed the bright extent of the detonations.

Another video of the huge explosion at 46 Brigade arms depot in #Hama, rumours of Israeli Strikes, could be sabotage as well. pic.twitter.com/ZnmYUTq4W7

The pro-opposition Orient News said the 47th Brigade base is being used by Iran-supported militias who are “heavily involved” in attacks in the area.

Speculation centered on airstrikes by the Israel Defense Forces, who have periodically hit Assad regime facilities to limit transfer of missiles and weapons to Lebanon’s Hezbollah, an ally of the regime, and to deter an expansion of the Iranian presence and operations.

The IDF does not comment on its activity inside Syria.

Earlier Sunday, Defense Minister Avigdor Liberman said, “We will maintain freedom of operation in all of Syria”, and will not be deterred if Russia supplies the Assad regime with advanced air defense systems.

“[We] “will prevent Iran from establishing a forward base in Syria at any cost,” Liberman added.

In both February and earlier this month, Israeli warplanes fired missiles on the T-4 base in central Syria, with several Iranian personnel reportedly among the casualties.