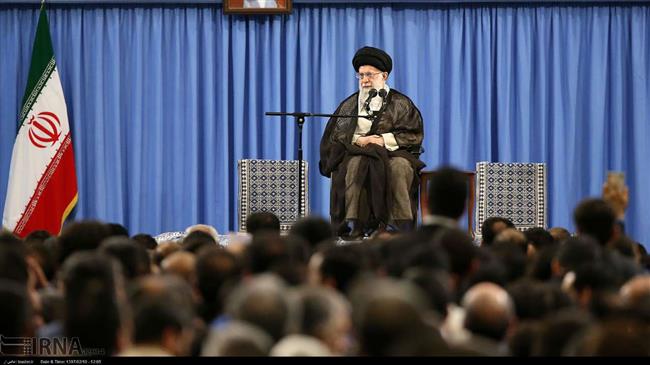 Podcasts: The Netanyahu Show — What Now for Israel, the US, and Iran

Amid a chance of confrontation in Syria and a possible US withdrawal from the July 2015 nuclear deal, Iran’s Supreme Leader and Israeli Prime Minister Benjamin Netanyahu engaged in a high-profile war of words on Monday.

Ayatollah Khamanei called for Iranians to maintain resistance against an alliance of the US, Saudi Arabia, and Israel. Later Netanyahu presented a case insisting — based on a mysterious archive of “evidence” and in defiance of reports by international inspectors — that Iran has been pursuing a nuclear weapons program despite the nuclear agreement with the 5+1 Powers (US, UK, France, Germany, Russia, and China).

Speaking to Iranian workers and businessmen in Tehran, Khamenei said:

The Americans are trying to provoke the Saudis and certain countries in the region and pit them against the Islamic Republic but if they have wisdom, they should not be deceived by the United States….

Khamenei’s remarks came a day after new US Secretary of State Mike Pompeo visited Saudi Arabia and Israel, in discussions seen as consolidating an anti-Iran front ahead of Donald Trump’s May 12 decision on whether to continue the waiver of sweeping American sanctions on Tehran.

Far from backing away, the Supreme Leader called for US withdrawal:

Wherever U.S. entered, it created instability, brought misery to people; that's why U.S.'s feet must be cut off from West Asia; U.S. must exit this region. The one whose feet should be cut off is U.S., not Islamic Republic. We are from here. Persian Gulf, West Asia are our home.

But Khamenei tipped off concern about tougher US sanctions compounding Iran’s economic difficulties, even as he maintained that his plans for “Resistance Economy” could withstand the pressure: “Today, the war waged against us is funded by US Department of Treasury. How do we encounter it? We invest in on our own economy.”

He pushed his “Year of National Production” and a halt to foreign imports as the solution for problems which — apart from the sanctions — include rising unemployment, mismanagement and corruption, and a historic currency crisis.

Supporting Iranian goods is one of the best and most effective ways to counter the economic designs of the enemies, because they have found out that they will not be able to succeed in a hard military war….

Why are some people insisting on buying foreign goods? What is this misconception and ailment? All government agencies and the people should decide to use Iranian goods.

In a televised address from the Israeli Ministry of Defense, Prime Minister Netanyahu declared that his officials had been given an “atomic archive” from an Iranian secret compound, establishing Tehran’s pursuit of a nuclear bomb.

“Tonight, I’m here to tell you one thing: Iran lied -=- big time,” Netanyahu said, announcing that Israel had 55,000 pages and 100,000 files with blueprints, charts, photos, videos and presentations: “Iran planned at the highest level to continue work related to nuclear weapons under different guises and using the same personnel.”

Netanyahu said the files were now in a “secret place” but had been shared with the US, which could “vouch” for their authenticity. He said the documents will now be presented to other countries and the International Atomic Energy Agency

IAEA inspectors have issued periodic reports setting out Iran’s compliance with the terms of the Joint Comprehensive Plan of Action, including Tehran giving up its stock of 20% uranium — for civilian use, but which potentially could be enriched further to military-grade 95% — and suspending research and development of a new generation of nuclear centrifuges.

US intelligence services have assessed that Iran did have an undeclared nuclear weapons program, but halted it in 2003.

Iranian officials quickly knocked back Netanyahu’s claims. Deputy Foreign Minister Abbas Araqchi said, “What we saw from Netanyahu was a childish play which we had also witnessed in previous years and also from the [Iranian] MKO terrorist group.”

Araqchi said the claims of the 55,000 documents is “ridiculous” because the Islamic Republic would never keep sensitive material in an abandoned area.

BREAKING: The boy who can't stop crying wolf is at it again. Undeterred by cartoon fiasco at UNGA. You can only fool some of the people so many times. pic.twitter.com/W7saODfZDK

The White House put out a statement, including the misleading claim that Iran has always pursued a nuclear weapons program:

The United States is aware of the information just released by Israel and continues to examine it carefully. This information provides new and compelling details about Iran’s efforts to develop missile-deliverable nuclear weapons.

These facts are consistent with what the United States has long known: Iran has a robust, clandestine nuclear weapons program that it has tried and failed to hide from the world and from its own people. The Iranian regime has shown it will use destructive weapons against its neighbors and others. Iran must never have nuclear weapons.

The White House later told reporters — while declining to issue a correction — that the statement was incorrect in setting out an ongoing nuclear weapons effort by Tehran.

But Donald Trump used Netanyahu’s presentation to say he was “100% right” in criticizing the 2015 nuclear deal. With an inaccurate statement about the timeline of the JCPOA, he asserted:

In seven years, that deal will have expired and Iran is free to go ahead and create nuclear weapons. That is not acceptable. Seven years is tomorrow.

Asked what will happen to the deal, Trump responded, “We’ll see what happens.”

Zarif claimed a misguided Israeli-US campaign to justify American withdrawal: “Coordinated timing of alleged intelligence revelations by the boy who cries wolf just days before May 12. But Trump’s impetuousness to celebrate blew the cover.”