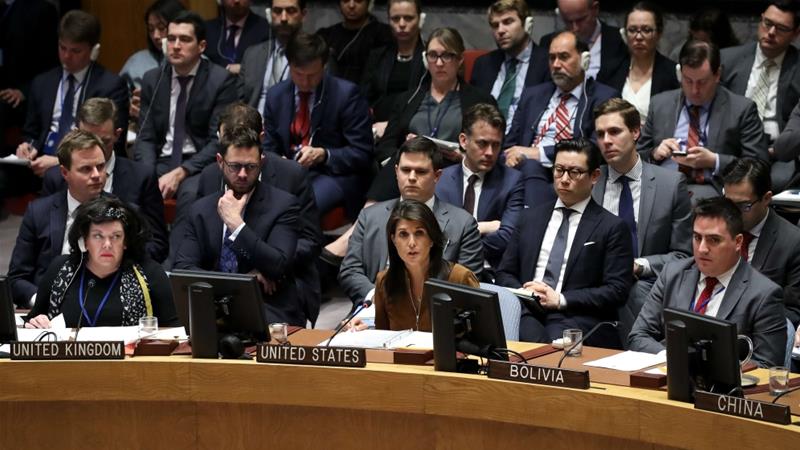 Haley: “Only a monster targets civilians and then ensures there are no ambulances to transport the wounded”

Podcasts: Will US and Others Respond to Assad’s Chemical Attacks?

UPDATE 0730 GMT: Russian missiles, fired from a warship or submarine in the Mediterranean, hit a residential building in Idlib Province in northwest Syria on Monday night, killing 17 civilians and injuring more than 150.

After hours of search and rescue operations, the Civil Defence team confirmed 17 civilians killed and 154 wounded, are the victims of the explosion that took place in #Idlib city yesterday. Many still trapped. The search operation for survivors continues. pic.twitter.com/pm7MMv6LeV

UPDATE 0630 GMT: Russian officials have pronounced that no one in Douma was hurt by chemical exposure over the weekend.

Russia’s “Center for Reconciliation” declared that, after Russian personnnel visited the town and its medical facilities, “all attempts to spin a war on those charges seek to derail peace efforts”.

Opposition activists warned on Monday that the Russians had moved quickly into Douma to clear any evidence of the Assad regime’s Saturday attacks.

Translation:
We cleared all the evidences. https://t.co/daVpF4NwPc

The Assad regime’s chemical attack on Douma, near Syria’s capital Damascus, has brought angry clashes at the UN Security Council.

The US, Britain, France, and six other countries requested Monday’s emergency session over the killing of at least 85 people — many of them women and children — in two attacks on Saturday, one with chlorine and one with a stronger chemical agent.

US Ambassador Nikki Haley echoed the line from the Trump Administration that it is ready to respond regardless of any Security Council action:

Either way, the United States will respond.

Haley said of Bashar al-Assad, “Only a monster targets civilians and then ensures there are no ambulances to transport the wounded”:

"Only a monster targets civilians and then ensures there are no ambulances to transport the wounded." – US Ambassador to UN Nikki Haley takes aim at Assad and Russia during the UNSC emergency meeting on Syria following the alleged chemical attack in Douma pic.twitter.com/Xwj0APfqIA

Repeating Moscow’s approach over previous chemical attacks by the Assad regime, Russian Ambassador Vassily Nebenzia, claimed “fake news” and said Russia was ready to fly the inspectors of the Organization for Prohibition of Chemical Weapons — a body whose mandate Moscow limited last autumn after it found the Assad regime responsible for an April 2017 sarin attack in northwest Syria — into Douma.

Nebenzia said any military action against the Assad regime could have “grave repercussions”: “Russia is being unpardonably threatened. The tone with which this is being done has gone beyond the threshold of what is acceptable, even during the Cold War.”

Diplomats said the US plans to call for a Security Council vote on Tuesday to authorize an OPCW inquiry which can attribute responsibility.

They said Russia is likely to veto the resolution.

Continuing his abrupt shift of position over the Syrian conflict, Donald Trump said Monday that he would make a decision by the end of the day “or very shortly thereafter” on a response: “We can’t let atrocities like we all witnessed….We can’t let that happen in our world…especially when we’re able to because of the power of the United States, the power of our country, we’re able to stop it.”

Last week Trump was calling for a withdrawal of US troops from Syria but he said on Twitter, after watching TV on Sunday morning: “President Putin, Russia and Iran are responsible for backing Animal Assad. Big price to pay.”

Trump made the switch without consulting advisors, who spent Sunday and Monday developing proposals while the President talked of “a lot of options militarily.” He also continued his change of tone over Russia’s Vladimir Putin: asked if Putin might bear responsibility, Trump replied, “He may, yeah, he may. And if he does, it’s going to be very tough, very tough.”

For the second day in a row, Trump spoke with President Emmanuel Macron of France, which had indicated before the weekend that it would intervene against any Assad regime attack with chemicals stronger than chlorine.

Defense Secretary James Mattis said earlier on Monday that no military option was off the table.

The Kremlin said Putin spoke with Chancellor Angela Merkel of Germany: “The Russian side stressed the unacceptability of provocation and speculation on this matter.”

Berlin swung towards the US, UK, and French position during the day, saying the Assad regime must be held accountable for the chemical attacks.