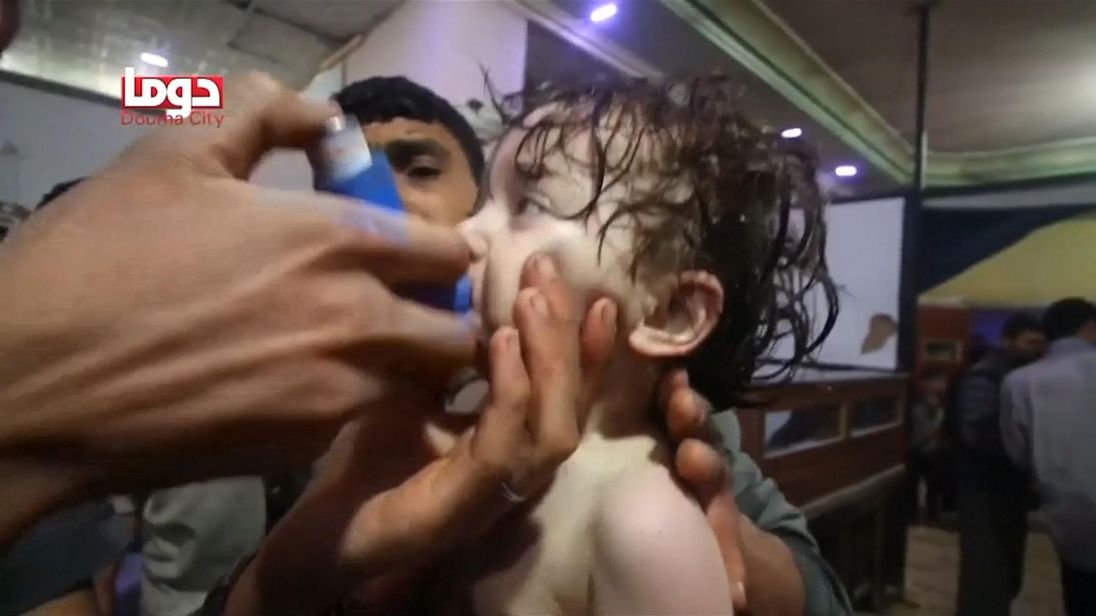 UPDATE 2000 GMT: The Violations Documentation Center expresses concern that Russian personnel may have tried to remove evidence of the Assad regime’s chemical attacks:

Russian military police entered Douma city today and inspected the suspected chemical attack site. Witnesses were not allowed near the site during the inspection, and it is unclear if the police took any substance or if they have tampered with any of the evidence. #Syria #Douma

The Russians near the site of the attacks:

UPDATE 1945 GMT: Mohammed Alloush, a senior official of Jaish al-Islam, says bluntly why the rebel faction capitulated to Russian negotiators: “Chemical attacks were threatened again if we did not agree to the displacement.”

UPDATE 1645 GMT: The Organization for the Prohibition of Chemical Weapons says it has opened an investigation into the chemical attacks on Douma.

With the Assad regime now controlling the area, the OPCW is unlikely to get access. Instead, it will interview witnesses, collect samples of blood from survivors, and gather data on military flights — the methods used to establish the Assad regime’s responsibility for the April 2017 sarin attack in northwest Syria.

In that case, the OPCW’s Joint Investigation Mechanism was able to assign blame. But Russia then refused to extend the JIM’s mandate, meaning the OPCW can establish what has occurred but — at least formally — not who is behind the attack.

UPDATE 1230 GMT: The Violations Documentation Center, citing witnesses, has posted a timeline of the chemical attacks on Douma on Saturday.

About 12 pm: A Red Crescent center in Douma is targeted with two guided missiles and several barrel bombs. The center is immediately rendered out of service and ambulances are destroyed. The only remaining service for transporting the wounded in Douma is the civil defence. Syrian warplanes continue to drop barrel bombs that disrupt the travel of civil defense vehicles and rescue teams who are transporting the wounded due to lack of ambulance services.

About 4 pm: The Syrian air force targets Saada Bakery with an airstrike suspected to have contained poisonous gas. A rescuer said it appears to be chlorine: “Dead bodies were on the streets, the wounded were bleeding badly, and the medical crews were not sufficient for the large amount of cases.”

About 7:30pm: The Syrian air force targets Martyrs’ Square near the Numan Mosque in Douma with an airstrike suspected to have contained poisonous gas. A doctor says the symptoms of patients are an attack by “organic phosphorus compounds in the sarin gas category”, accompanied by the smell of chlorine.

UPDATE 1215 GMT: As he is forcibly removed from Douma, a medic says, “I will have the memories of my home that was bombed. I’m taking 2 bags, but my mind and memory hold so much of what we have lived through.”

The death toll from Saturday’s chemical attacks on Douma by Syria’s Assad regime has risen to at least 85, most of them women and children.

Seeking to break resistance to a capitulation deal, regime helicopters carried out two attacks on the town, the last in opposition-held East Ghouta near Damascus.

Reports circulated later in the day that the weekend’s chemical and conventional assault, which killed at least 225 people and wounded more than 1,000, had forced a rebel surrender. Jaish al-Islam, the faction in Douma, did not confirm the reports of a deal with Russian officials.

However, a bus with dozens of fighters and their families left for northern Syria, while a group of detainees, held since late 2013, were released and arrived at a regime crossing.

Both Syrian and Russian State media said the forced removal is the first of several in coming days, with Jaish al-Islam fighters and families displaced to Jarablus, near the border with Turkey. Numbers of 8,000 fighters and 40,000 relatives to be removed have been circulating.

There were removals of the sick, injured, and fighters and families from other factions in the past two weeks, but Jaish al-Islam refused a full departure from Douma. That brought the renewal of regime-Russian attacks from last Friday.

The first attack on Saturday afternoon was with chlorine, the second on Saturday night is believed to have been with a stronger agent. Before the assault, pro-Assad warplanes — having knocked out or damaged most medical facilities — attacked the positions of first responders to limit rescues.

“It’s a catastrophe,” Mansour Abu al-Kheir, a rescuer, said. “No words or pictures can describe what civilians have lived through these past two days.”

The two-month pro-Assad offensive that reclaimed East Ghouta, held by the opposition since 2012, killed about 2,000 people, wounded thousands of others, and displaced tens of thousands of people.

“My Lungs Were Shutting Down”>

Meanwhile, residents of Douma spoke of the chemical attacks which they survived.

Khaled Abu Jaafar talked of running down the stairs with a little girl in each arm and a wet piece of cloth over his mouth.

“I lost consciousness. I couldn’t breathe any more; it was like my lungs were shutting down,” he said. “I woke up about 30 minutes later and they had undressed me and were washing my body with water.”

While people were in the shelters, some on the roof managed to see the gas bombs as they dropped from the planes. Those who saw them rushed to tell everyone in the basement to evacuate….

There were basements in other buildings with people who didn’t see the gas in time. We entered those buildings and found bodies on the staircases and on the floor – they died while attempting to exit.

“We Are Being Exterminated”

“Only a handful of doctors remain,” Fahad Hanan, a doctor and Douma resident, added. “We’ve been working in the hospital for two days straight. It’s a disaster.”

A resident said bluntly, “In short, we are being exterminated in Douma.”

Another corresponded with a journalist contact on social media, “The city of Douma is now the city of blood….I lost everything, even my house became rubble.”