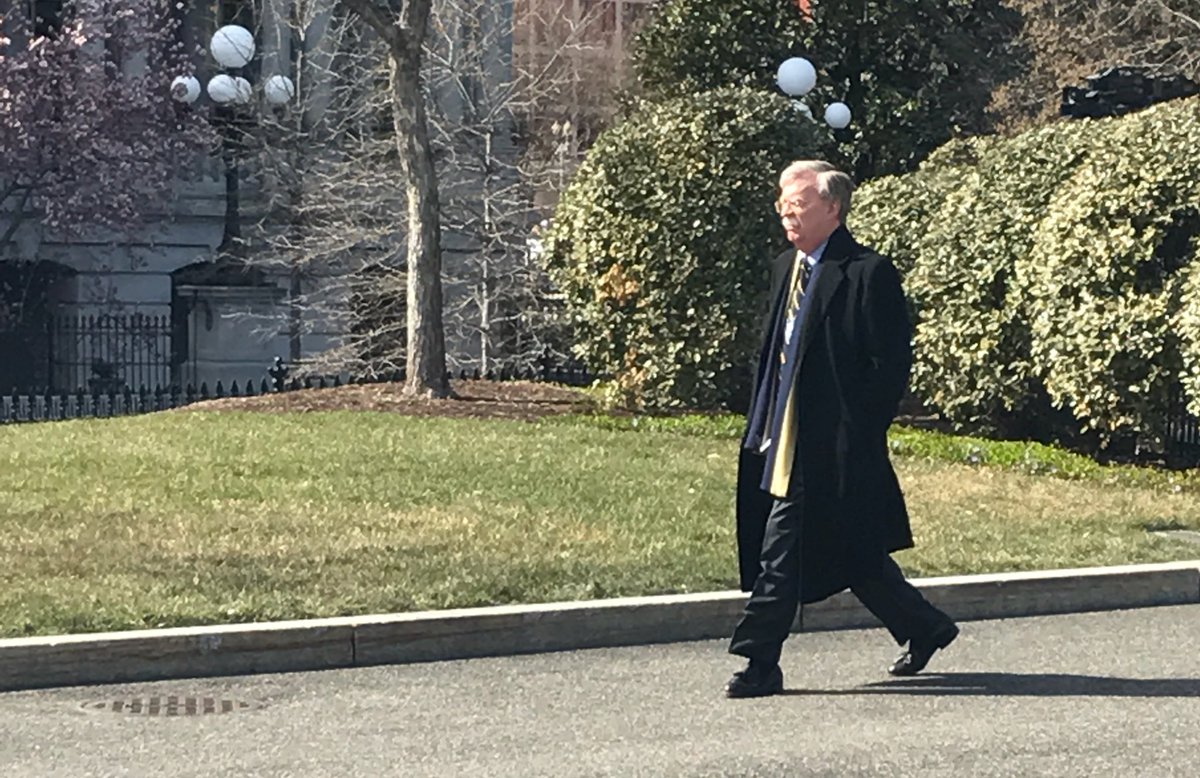 Developments on Day 427 of the Trump Administration:

Continuing his resort to a collection of family, friends, and TV pundits, Donald Trump removes National Security Advisor H.R. McMaster and replaces him with the hardline neoconservative John Bolton.

Months of pressure from White House foes and hard-right attack sites finally paid off on Thursday with McMaster’s resignation and retirement as a three-star general after 34 years of service.

His departure removes one of the last pragmatists in the Administration trying to contain Trump’s impulsive behavior and reliance on family such as son-in-law Jared Kushner and protectionists for his foreign policy.

McMaster became National Security Advisor in March 2017, replacing Michael Flynn, who departed over lying to investigators about his contacts with Russian Ambassador Sergey Kislyak. The line was that McMaster, Defense Secretary Jim Mattis, Secretary of State Rex Tillerson, and Homeland Security head John Kelly — who became White House Chief of Staff in July — would check turmoil and uncertainty even amid the expanding Trump-Russia investigation.

However, Kelly has swung from trying to control Trump to covering for him. Two weeks ago, Tillerson was fired, to be replaced by Trump loyalist and CIA Director Mike Pompeo. And Trump’s impulsive decision to impose steel and aluminum prompted the resignation of his chief economic advisor Gary Cohn.

For weeks, White House sources fed speculation about McMaster’s departure with stories that his forthright approach and reference for order made him an uncomfortable fit with Trump’s style and dislike for detail and nuance of complex national security issues. The pressure was accentuated by claims that Kelly and even Mattis had turned against the National Security Advisor.

Trump turned to Lawrence Kudlow, an economist best known as a TV commentator, to replace Cohn. Yesterday, he turned to Bolton, a Fox News pundit who has been an informal advisor, to take over the National Security Council.

Bolton, who came to prominence when he tried to stave off a Florida recount in the disputed 2000 Presidential election, served as UN Ambassador and Undersecretary of State in the George W. Bush Administration. He was known for his hardline opposition to the UN, declaring that its top floors should be removed; advocacy of the 2003 Iraq War; and calls for military confrontation with countries such as Iran and North Korea.

His appointment signals a tougher Administration line on Iran, raising the possibility of American departure from the July 2015 nuclear deal and the renewal of the military option. And it could be a complication after Trump announced earlier this month that he will meet North Korean leader Kim Jong-un in May.

Pompeo, the proposed Secretary of State, has taken similar positions on Iran and North Korea, speaking about hopes for regime changes and withdrawal from the nuclear agreement.

Bolton was in the White House on Thursday to discuss his new position, which he will assume on April 9.

Trump’s sudden announcement of the appointment surprised Bolton, who said, “This hasn’t sunk in.” The President’s decision may have been prompted by a desire to overtake other stories, such as the resignation of his top personal lawyer John Dowd over the Trump-Russia inquiry and a TV interview with a former Playboy model, Karen McDougal, who described a nine-month sexual relationship with Trump in 2006.

“He Will Remain My Friend”

I am pleased to announce that, effective 4/9/18, @AmbJohnBolton will be my new National Security Advisor. I am very thankful for the service of General H.R. McMaster who has done an outstanding job & will always remain my friend. There will be an official contact handover on 4/9.

McMaster was more reserved, saying that he would have preferred to remain until summer, but that “the timing was dictated by “what was best for him and the country”. He tipped off the pressure on him by saying his departure had been discussed for weeks.

A source inside the National Security Council said the mood was somber on Thursday night, with offices largely empty in an agency renowned for its round-the-clock work schedule.

Dowd portrayed the departure as one on friendly terms — “I love the President and wish him well” — but Trump’s legal team has split over the response to Special Counsel Robert Muller, with the President feeding the turmoil with sudden changes.

Dowd and White House lawyer Ty Cobb have favored cooperation with Mueller, but Trump and other advisors have become frustrated as the inquiry closes, including examination of the financial records of the Trump Organization and the prospect of Trump having to give oral testimony.

Trump has signalled a more aggressive approach with weekend tweets attacking Mueller and a “WITCH HUNT”, and the President appointed John DiGenova, a commentator on Fox TV who has claimed a conspiracy to remove Trump by framing him with criminal charges.

Dowd’s position was further unsettled by Trump’s impulsive positions. Last Saturday the lawyer told the Daily Beast that, speaking for the President, he was “praying” for the end of the Mueller inquiry. The White House intervened quickly, and Dowd said later that he was speaking only in a personal capacity.

A “source familiar with his thinking” said Trump complained privately in recent days that Dowd was failing in his duties, and questioned whether the lawyer had the energy or capacity to continue.