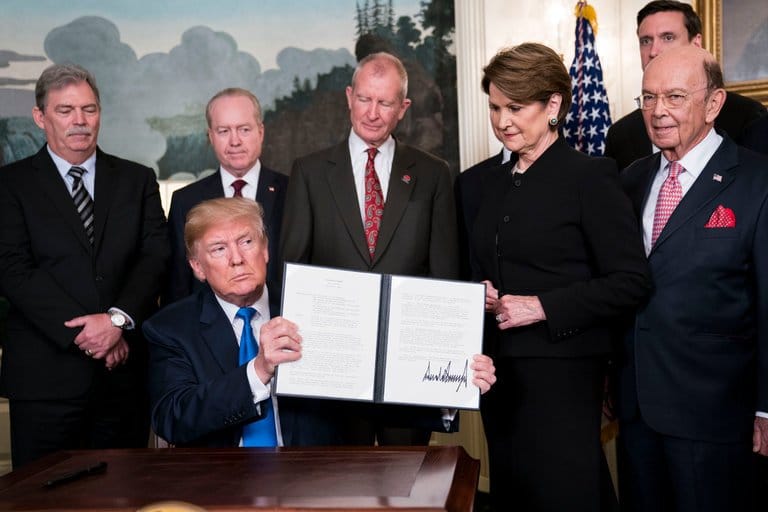 Refocusing his Administration’s protectionism, Donald Trump has announced tariffs on up to $60 billion of Chinese goods while retreating from steel and aluminium duties that have been protested by US allies.

Setting aside his admiration for Chinese President Xi Jinping, Trump carried out his campaign promise — and the hopes of the protectionists — for a confrontation with Beijing, signing the order on Thursday.

Invoking a 1974 trade law, the White House says China is using pressure and intimidation to obtain US technology and trade secrets. They claim that Chinese firms force US companies into partnerships, then steal technology and end the joint venture; that Beijing’s “cyber intrusion” steals commercial secrets; and that US companies operating in China do not have the same property rights that Chinese firms have.

But the focus on China also covers the step back from Trump’s impulsive, ill-considered announcement three weeks ago of tariffs of 25% on steel and 10% of aluminum. The measures were initially framed as a step versus Beijing, but the Chinese are not a significant supplier of the metals to the US. Instead, the restrictions hit exporters to the US such as Germany, Japan, South Korea, Brazil, and Canada, the largest foreign supplier to the US.

Earlier this month, Canada and Mexico were excluded from the tariffs because they were likely to violate provisions of the North American Free Trade Area. And on Thursday, Trump extended the exemption to the European Union, Brazil, and Australia.

Meanwhile, Trump tried to draw attention to China, whom he accused during the Presidential campaign of “raping” the US economy and “taking advantage of us like nobody in history”. He said, “We have one particular problem. We have a tremendous intellectual property theft situation going on.”

Concerns and A Chinese Response

The US announcement sent stock markets tumbling, with the Standard & Poor’s 500 index dropping 2.5% and Asian and European markets following on Friday morning.

China’s Ministry of Commerce said it is proposing tariffs on 128 US products, such as nuts, wine, and pork, valued at a about $3 billion. It urged the Trump Administration to resolve differences through dialogue to “avoid damage to the broader picture of Chinese-US cooperation”.

The Chinese Embassy in the US said:

China does not want a trade war with anyone. But China is not afraid of and will not recoil from a trade war. China is confident and capable of facing any challenge. If a trade war were initiated by the U.S., China would fight to the end to defend its own legitimate interests with all necessary measures.

Chinese officials said they will take their case to the World Trade Organization.

But Peter Navarro, a White House protectionist who pushed through the steel and aluminum tariffs — and forced the resignation of chief economic advisor Gary Cohn — was unblinking: “We repeatedly aired our concerns about China. What the United States is doing is strategically defending itself from China’s economic aggression.”