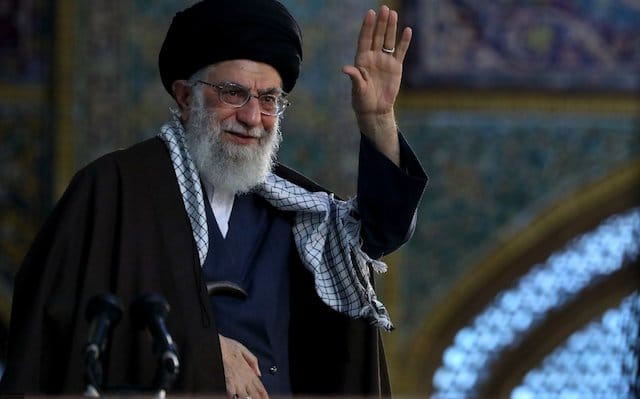 Trying to cover up Iran’s economic difficulties, the Supreme Leader has put out distorted statistics.

In two speeches for Iranian New Year on Tuesday and Wednesday, Ayatollah Khamenei tipped off concern about a lack of recovery by declaring the “Year of Domestic Productions”, urging Iranians to buy products made at home, and demanding that authorities restrict imports.

However, he insisted that Iran’s challenges with production, a lack of investment, unemployment, income inequality, and a weak currency — all of which spurred nationwide protests in January — are “enemy propaganda trying to make people disappointed in the establishment”. He asserted:

If you compare our country with how it was before the revolution, or with many other countries, you will see that class struggle is less, and low income classes are more abled. Education, health services, and many other things are certainly more generalized compared to many other countries.

Working with the Numbers

To prove his point, Khamenei claimed that the gap between rich and poor has been reduced in the Islamic Republic, using the international measure GINI, where 0 is perfect equality and 100 is absolute inequality:

Before the Islamic Revolution the GINI index was at 50, whereas, in 2015 it was 38 for Iran. The difference between 50 and 38 indicates the amount that the problem of inequality has been reduced.

However, Khamenei failed to mention that — in the narrower timeframe of 2014-2017 — Iran has made no progress on the GINI scale despite a limited recovery after the July 2015 nuclear deal with the 5+1 Powers. Despite a growth rate of about 6.5%, largely due to the renewal of oil exports, the GINI index is unchanged at 38.

The explanation, unmentioned by the Supreme Leader: the lion’s share of profits from recovery have gone to Iran’s wealthiest people, with income inequality expanding by 3% in 2016-17.

Khamenei continued with his proclamation that “absolute poverty” had been reduced in the Islamic Republic from 46% before the 1979 Revolution to 9.5% in 2014.

The Supreme Leader did not mention that, as income disparity has increased, Iran has struggled to hold that poverty rate. Nor did he explain that a key reason for poverty reduction before 2013, weekly cash handouts, had come at significant cost for the economy which eventually eroded any progress:

The drop comes from the former government’s Subsidy Reform Plan, which at first bettered the livelihoods of lower income people, especially in rural areas. However, inflation and economic recession negated those initial gains.

The Iranian government started the plan in 2010 at a colossal cost. Every Iranian was paid an equivalent of $45 each month. The money was to replace subsidies on food and fuel that cost the government a third of Iran’s GDP each year, but ended up costing more.

However, none of this deterred Khamenei as he proclaimed — amid the declaration that “no other country is as independent as Iran” — “The Islamic Republic flew the flag of dignity and strength for the Iranian nation in the region.”