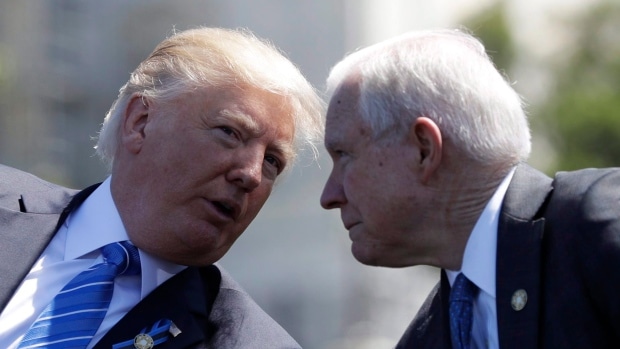 Developments on Day 405 of the Trump Administration:

Donald Trump renews his attack on Attorney General Jeff Sessions for not intervening to divert attention from the Trump-Russia investigation.

In a Twitter blast on Wednesday, Trump showed his frustration at ongoing revelations that Special Counsel Robert Mueller’s inquiry is closing on him and his inner circle. He insisted that Sessions speed up a report on the FBI’s conduct of its investigations, including the obtaining of a warrant from a top-secret Government court for surveillance of Russian officials and entities and Trump campaign advisor Carter Page.

Why is A.G. Jeff Sessions asking the Inspector General to investigate potentially massive FISA abuse. Will take forever, has no prosecutorial power and already late with reports on Comey etc. Isn’t the I.G. an Obama guy? Why not use Justice Department lawyers? DISGRACEFUL!

But this time Sessions — who has periodically been targeted by Trump and has been on the point of resignation, only to be persuaded by White House staff to stay — pushed back:

[The Justice Department] initiated the appropriate process that will ensure complaints against this department will be fully and fairly acted upon if necessary.

As long as I am the Attorney General, I will continue to discharge my duties with integrity and honor, and this department will continue to do its work in a fair and impartial manner according to the law and Constitution.

Trump’s latest attack on Sessions was spurred by the failure of a Trump-backed effort earlier this month to tarnish the FBI and undermine the Russia investigation. A memo by Trump’s ally, House Intelligence Committee chairman Devin Nunes, accused the agency of acting inappropriately in obtaining the FISA court warrant in October 2016, but it was immediately exposed for factual errors, distortions, and omissions.

The Justice Department’s Inspector General is still carrying out a formal review of the FBI’s approach over surveillance of Page, who was under scrutiny since 2013 when Russian officials began attempts to recruit him as an agent. In 2016, the Trump advisor travelled to Moscow, including a July trip where he met high-level officials in Russia’s leading energy companies.

Sessions was forced to recuse himself from the Trump-Russia investigation in March 2017 because of his meetings with Russian Ambassador Sergey Kislyak and his initial failure to acknowledge the encounters in testimony at his confirmation hearing in Congress.

But Trump, even at the risk of appearing to obstruct justice, has never stopped the demands for Sessions to intervene. He has called Sessions “weak” and derisively referred to him as the cartoon character “Mr. Magoo”, elderly, myopic, and bumbling. People with whom Trump say he claim he is stuck with Sessions, who is not defending him and is not sufficiently loyal.

Last week, Trump sneered at the Attorney General for not investigating the Obama Administration, rather than Trump and his allies, for not doing enough to stop Russia’s interference in the the 2016 election:

Question: If all of the Russian meddling took place during the Obama Administration, right up to January 20th, why aren’t they the subject of the investigation? Why didn’t Obama do something about the meddling? Why aren’t Dem crimes under investigation? Ask Jeff Sessions!

A source said Trump crossed a line with his latest tweet. While Trump’s earlier attacks on Sessions were spurred by a demand for investigations of 2016 Democratic nominee Hillary Clinton and Obama, this time Trump was calling the Attorney General to go after Justice Department attorneys.

I couldn’t agree more. @USAGSessions must be part of the Bush/Romney/McCain Republican Establishment. He probably supported @realDonaldTrump early in campaign to hide who he really is. Or he could just be a coward. https://t.co/9D1ppRTSyp

Trump’s outburst could put him in further jeopardy in the Russia investigation, with Special Counsel Mueller looking at possible obstruction of justice.

“People familiar with the matter” said Mueller is investigating Trump’s pressure on Sessions last summer, when he denounced the “beleaguered” Attorney General. The counsel is considering whether Trump was trying to put in a replacement who would limit or even block the inquiry.

It has already been reported that Mueller is examining Trump’s efforts in the spring of 2017 to fire Sessions.

‘
White House Communications Director Hope Hicks, one of the closest confidantes of Donald Trump, is resigning.

The White House confirmed Hicks’ resignation on Wednesday, a day after she testified for eight hours before a Congressional committee considering Trump-Russia links.

Hicks told investigators of the House Intelligence Committee that her job on the Trump campaign occasionally required her to tell “white lies” for Donald Trump. However, after extended consultation with her lawyers, she insisted that she had not lied about issues around Trump and Russia.

Hicks was reportedly involved in the July 2017 discussion aboard Air Force One when Donald Trump Sr. allegedly dictated a false statement about the June 2016 meeting in Trump Tower between three Kremlin-linked envoys and Donald Trump Jr., Jared Kushner, and Paul Manafort.

Hicks did not directly connect her departure to the testimony when she told her communications team on Wednesday afternoon, but she said that it was the “right time to go”.

A “source familiar with her thinking” said she began consideration of resigning amid the controversy over White House Staff Secretary Rob Porter, forced to resign earlier this month because of allegations of spousal abuse by two ex-wives. Hicks was dating Porter at the time.

The former model was one of the first people hired for the Trump campaign. She was soon a constant presence at Trump’s side. In the White House, she began as director of strategic communications and became Communications Director in July after her predecessor Anthony Scaramucci lasted only 10 days.

Donald Trump’s son-in-law and senior advisor Jared Kushner obtained large loans for his company after meetings in the White House.

In November, Apollo Global Management lent $184 million to Kushner Companies after Kushner’s discussions with Apollo’s founder Joshua Harris, who purportedly was advising the Trump Administration and was being considered for a White House job.

The loan, refinancing the mortage on a Chicago skyscraper, was three times the sign of Apollo’s average loan.

Citigroup lent Kushner Companies and one of its partners $325 million to help finance a group of office buildings in Brooklyn in spring 2017. The loan followed a White House meeting between Kushner and Citigroup’s chief executive Michael Corbat.

One source insisted that the two men talked about financial and trade policy and did not discuss Kushner Companies.

Peter Mirijanian, a spokesman for Kushner’s lawyer Abbe Lowell, insisted that advisor “has taken no part of any business, loans or projects with or for” Kushner Companies since joining the White House and that he has followed ethics advice.

Kushner is already under scrutiny for his failure, when joining the White House, to declare financial information and more than 100 meetings with foreign officials. Some of those meetings, reportedly including a December 2016 discussion with the head of a Russian State bank, concerned loans for a troubled New York City skyscraper project facing a $1.9 billion mortgage payment in early 2019.