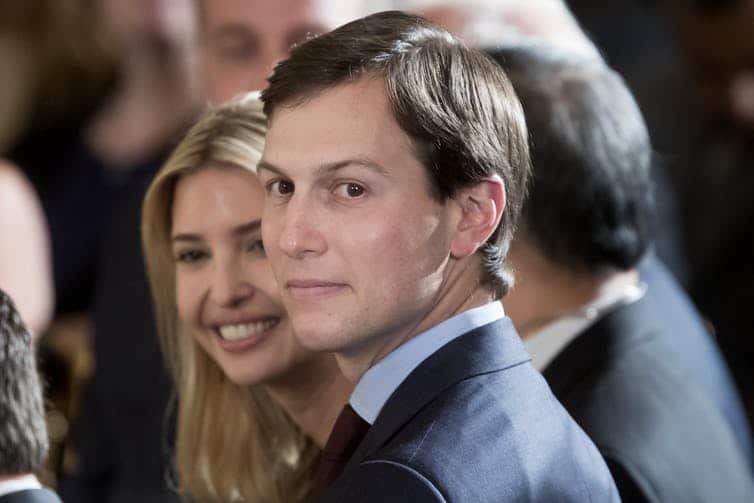 Developments on Day 404 of the Trump Administration:

The downgrade from “top secret/sensitive compartmented information” to “secret” clearance for Kushner, who is a senior White House advisor, was confirmed on Tuesday. It would prevent Kushner from accessing the Presidential Daily Brief, the collection of top-secret material prepared for Trump each day.

Kushner has been unable to get a full clearance since he entered the White House in January 2017 because of issues over his disclosure forms, which failed to give a full account of his financial position and did not mention more than 100 meetings with foreign officials. Kushner subsequently submitted revised forms, but has been unable to remove questions.

He was able to operate on the interim clearance until the complication earlier this month of White House staffer Rob Porter, forced to resign over allegations of spousal abuse by two ex-wives. As the controversy escalated, it was revealed that Porter was also operating on an interim clearance, having failed to pass FBI background checks. Chief of Staff John Kelly then accounced that access to top-secret material would be denied to anyone with interim status.

Trump can still use Presidential prerogative to give Kushner, who is the US envoy to the Middle East and has a wide range of authority in other foreign policy issues, access to the top-secret intelligence on a case-by-case basis.

Press Secretary Sarah Huckabee Sanders said of Kushner on Tuesday, “He is a valued member of the team and will continue to do the important work he has been doing since he started in the administration.”

A “person familiar with the situation” said the FBI is expected to wrap up Kushner’s background check within a month, with findings handed to the White House for a final decision. A “surge” of FBI agents have been tasked with processing a backlog of background investigations into Trump administration officials seeking security clearances, law enforcement sources said.

Officials in at least four countries have privately discussed how to manipulate Kushner by taking advantage of his complex business arrangements, financial difficulties, and lack of foreign policy experience, according to “current and former U.S. officials familiar with intelligence reports on the matter”.

The countries include the UAE, China, Israel, and Mexico. The officials said the concerns are among the reasons why the advisor has not received a full security clearance.

“When he learned about it, it surprised him,” one official said. “He thought that was weird….It was an unusual thing. I don’t know that any White House has done it this way before.” The official said that McMaster was “not concerned but wanted an explanation. It seemed unusual to him.”

Sources said that, in the following months, McMaster and Kushner have worked to coordinate so NSC is aware of Kushner’s contacts with foreign officials and so Kushner has access to the council’s country experts to prepare for meetings.

“General McMaster has the highest regard for Mr. Kushner, and the two work well together,” asserted NSC spokesman Michael Anton. “Everything they do is integrated….It’s seamless.”

But a “former White House official” — echoing comments made by former White House chief strategist Steve Bannon — said Administration staff are concerned that Kushner was “naive and being tricked” by foreign officials, some of whom said they wanted to deal only with Kushner directly rather than more experienced personnel.

Questions have been raised about complications between Kushner’s business interests and his foreign policy role. Before the inauguration, he unsuccessfully sought loans from China and Arab countries for a troubled New York City building project on which a $1.9 billion mortgage is due in early 2019. The matter may also have been part of his discussion with Sergey Gorkov, the head of a Russian State bank, in December 2016.

Despite Kushner’s role as Middle East envoy, Kushner Companies are pursuing new projects in Israel, prompting critics to ask if the advisor can maintain a balanced approach on topics such as the Israel-Palestine issue.

“Current and former officials said” the UAE identified Kushner in spring 2017 as particularly manipulable because of Kushner Companies’ search for investors in real estate projects.

Peter Mirijanian, a spokesman for Kushner’s lawyer Abbe Lowell, pushed aside the reports, “We will not respond substantively to unnamed sources peddling second-hand hearsay with rank speculation that continue to leak inaccurate information.”

“Three people familiar with the matter” said investigators have been asking witnesses about Trump’s business activities in Russia before the 2016 Presidential campaign.

Questions included the timing of Trump’s decision to seek the presidency, potentially compromising information the Russians may have on him, and the collapse of efforts to brand a Trump Tower in Moscow.

A witness told Mueller’s team his impression was that Trump was serious about running for President in 2014. That statement contradicted Trump’s tweet earlier this month that he “didn’t know” then that he was going to stand.

The witness was asked whether Russians had been seen in Trump Tower New York before 2015. He replied no.

Questions about compromising information have parallelled claimed in the 2016 “Steele dossier”, setting out Trump’s contacts and financial interests in Russia as well as the meetings between Trump staff and Russian officials during the campaign.

Several lines of questioning have centered on the 2013 Miss Universe pageant, which was held in Moscow, and unsuccessful discussions to brand a Trump Tower Moscow.

Trump, who owned the rights to the pageant, partnered with Russian-Azerbaijani billionaire Aras Agalarov and his son Emin, a pop singer. After the event, discussions began between the Trump Organization and the Agalarovs about “Trump Tower Moscow”.

Trump fired off a series of tweets on Tuesday insisting there is no evidence of collusion and concluding:

Hicks to Committee: My Campaign Job Was to Tell “White Lies” for Trump

White House Communications Director Hope Hicks tells investigators of the House Intelligence Committee that her job on the Trump campaign occasionally required her to tell “white lies” for Donald Trump.

But, after extended consultation with her lawyers, she insisted that she had not lied about issues over possible Trump-Russia links.

Hicks was reportedly involved in the July 2017 discussion aboard Air Force One when Donald Trump Sr. allegedly dictated a false statement about the June 2016 meeting in Trump Tower between three Kremlin-linked envoys and Donald Trump Jr., Jared Kushner, and Paul Manafort.

In more than eight hours of private testimony, Hicks refused to answer questions about other figures from the Trump campaign or Administration. She also pointedly and repeatedly declined to answer questions about the transition or her time in the White House, saying she had been asked by the Administration to discuss only her time on the campaign.

Other witnesses, included former White House chief strategist Steve Bannon, have also refused to speak about their work in the White House or knowledge of any matters concerning Trump.