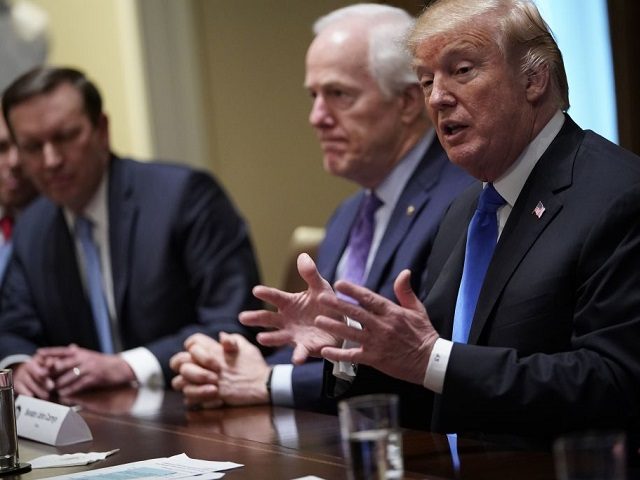 In a rambling statement on Wednesday, Trump surprised both Democrat and Republican legislators by embracing a series of measures which would bring in some regulation of guns, two weeks after a mass killing at a Florida high school led to a campaign putting pressure on the White House and the National Rifle Association.

Initially silent for six days about guns after 17 students and staff were slain at Douglas High School, Trump spent last week issuing a series of unusual and contradictory declarations. He offered limited concessions with a call to ban bump stocks, which convert semi-automatic into automatic weapons, and asked Congress to approve background checks, reversing his Administration’s rollback of data collection. But he then switched to a high-profile campaign to arm teachers, despite criticism from law enforcement, activists, students, and teachers themselves.

On Wednesday, Trump changed direction once more. Days after he appeared to back away from a statement that the age limit for rifle purchase should be raised from 18 to 21, amid opposition from the NRA, he again tabled the possibility. He again called for background checks, and this time he said it should not be linked to a bill allowing people to conceal and carry guns across state lines.

Democratic Senator Amy Klobuchar of Minnesota said afterwards, “I don’t know how much clearer he could have been and the whole country can watch it.”

In the meeting, Trump called for a base bill with expanded background checks on internet and gun show sales. Then he unsettled Republican Senators by suggesting more and more ideas from legislators to be added.

Marco Rubio, a leading recipient of NRA contributions, said, “I think that’s ideal if you could do it all at once. I just don’t think it’s likely to pass knowing this place.”

John Cornyn, tried to contain the meeting as “fascinating television” and “surreal”, and saide added that rolling multiple gun bills into one is “easier said than done”.

Lindsey Graham recalled that Trump had put on a similar televised performance during a discussion of immigration and then had not delivered on legislation: “If the President has another one of these sessions and he doesn’t follow through — it’s going to hurt him. It’s going to hurt the Republican Party.”

And Ben Sasse sharply rebuffed Trump in a statement after the meeting:

Strong leaders don’t automatically agree with the last thing that was said to them. We have the Second Amendment and due process of law for a reason. We’re not ditching any Constitutional protections simply because the last person the President talked to today doesn’t like them.