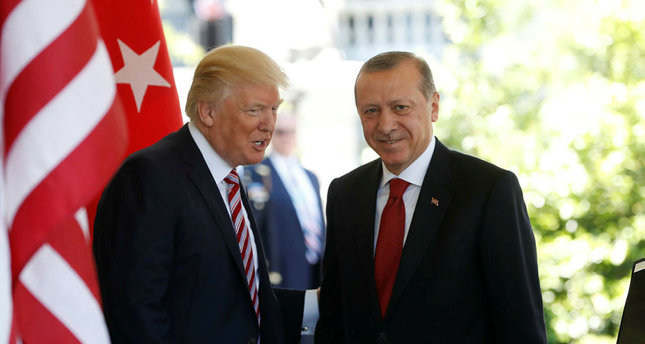 White House: We called for de-escalation; Turkey: No, you didn’t

Turkey and the US have differed sharply in their accounts of a phone call between Turkish President Recep Tayyip Erdoğan and Donald Trump, about the Turkish-rebel offensive on the Kurdish canton of Afrin in northwest Syria.

A White House statement said, “[Trump] urged Turkey to deescalate, limit its military actions, and avoid civilian casualties. He urged Turkey to exercise caution and to avoid any actions that might risk conflict between Turkish and American forces.”

According to the readout, Trump held the US line, set out since the start of the offensive, that Turkey should focus on the Islamic State.

Turkish officials immediately said
the statement “does not accurately reflect the content of President Erdoğan’s phone call with President Trump”.

They declared that Trump “did not share any ‘concerns [about] escalating violence’ with regard to the ongoing military operation in Afrin”, summarizing that the discussion was “limited to an exchange of views”.

However, the Turkish sources did say that Trump suggested the restriction of the Turkish-rebel operation, which began last Friday, to a “certain time limit” and avoidance of any fighting in Manbij in eastern Aleppo Province, held by the US-supported, Kurdish-led Syrian Democratic Forces.

After the SDF pushed the Islamic State out of Manbij in 2016, the US and Russia put forces near Manbij to prevent a takeover by a Turkish-rebel force which had defeated ISIS in northern Aleppo Province.

The Turkish officials indicated that Erdoğan maintained the demand for a withdrawal of the Kurdish militia YPG from Manbij as well as Afrin. The President said that the YPG and the Syrian Kurdistan Democratic Union Party (PYD) must withdraw to eastern Syria, east of the Euphrates River.

The officials declared that Trump met Ankara’s demand that the US will no longer supply the YPG with weapons.

The US position has been further complicated by reports of a split between the White House and the Pentagon over the response to the Turkish-rebel offensive. While the White House has backed away from support of the YPG, the Pentagon has maintained a US plan for a border security force led by the militia — a plan which, in part, spurred the Turkish-rebel move on Afrin as Erdoğan promised to “drown” the “terror army”.

Ankara considers the PYD and YPG to be part of the Turkish Kurdish insurgency PKK, which has battled Ankara’s security forces for more than 30 years.

A “senior US official” gave a muddled statement to Turkey’s Hurriyet newspaper. He said that the US has told Ankara that “we do intend to fulfill that commitment” to end weapons supplies to the YPG, “but I can’t give you a specific time frame”.

The official then repeated that the US will continue to cooperate with the Syrian Democratic Forces.

Erdoğan: No Difference Between ISIS and YPG

On the battlefield, there was little confirmed movement on Wednesday amid inclement weather and fog. The Turkish-rebel offensive claimed addvances in its first days, but the YPG said earlier this week that they had retaken lost territory, including the important high point of Mount Bursaya.

The governor of Kilis Province in southeast Turkey said two civilians were killed and six injured when rockets fired from Syria hit two locations in the city center, including the Çalık Mosque during prayers.

Kurdish outlets said 35 civilians have been killed and 106 wounded by the Turkish-rebel offensive.

Erdoğan maintained his political campaign against both the Kurdish YPG and the US, declaring that there is no difference between the Islamic State and Kurdish militias. He added:

Daesh terrorists that were besieged and could have been easily destroyed in Raqqa were taken out and spread to other regions. We know some of those are being kept in reserve for possible action against Turkey.

The Afrin operation also aims to eradicate some of this reserve.

He questioned “the humanity of those who accuse Turkey of being an invader and support an organization that has the blood of tens of thousands of innocent children, women, elderly people and innocents on its hands”.

The price of fuel has doubled this week in the northwest, according to residents and local government officials.

They said residents, hospitals and industrial bakeries are using reserves of mazot, a cheap form of diesel, to keep electricity and heat running amid the Turkey-rebel offensive on Afrin, a station on the trade route for fuel.

“Fuel is the backbone of life in Idlib city,” said Ismael al-Andani, President of the Syrian Salvation Government’s Idlib City Council. “We rely on it for electrical generators, transportation, machinery and bakeries….Our fear is that this closure will last for long time.”

Kurdish official Abdulbaset Sieda has resigned from the opposition Syrian National Council, protesting the SNC’s support of “side projects” like “what’s happening in Afrin.”.

The Kurdish National Council split from the SNC earlier this week when the Coalition said Turkish-rebel military operations are a campaign to “liberate” Afrin from Kurdish militia and “purge Syria of terrorism”.

“We call for a halt to the bombardment and military operations,” the KNC said.

The Assad regime and its allies have tried to push away the latest chemical attack on East Ghouta near Damascus, claiming that rebels poisoned residents.

Earlier this week medics treated 21 people for respiratory symptoms from an apparent chlorine attack, the second on the town of Douma since January 13.

But on Wednesday the pro-regime outlet al-Mayadeen proclaimed that about 30 people suffered from ammonium chloride poisoning, with at least two children dying. It said rebels had disguised the poisonous powder as table salt.

Local medical staff note that poisoning would have produced symptoms such as abdominal pain, which was not noted with any of the victims treated after the reported use of chlorine.

The latest chlorine attack prompted both French Foreign Minister Jean-Yves Le Drian and US Secretary of State Rex Tillerson to condemn the Assad regime and call for international action to halt the assaults.

Syria has always been fully cooperative and provided all that is necessary to conduct an unbiased, objective, and professional investigation into the use of chemical weapons, while the West was the one to obstruct this investigation and exercised various types of pressure on investigation teams to politicize it.