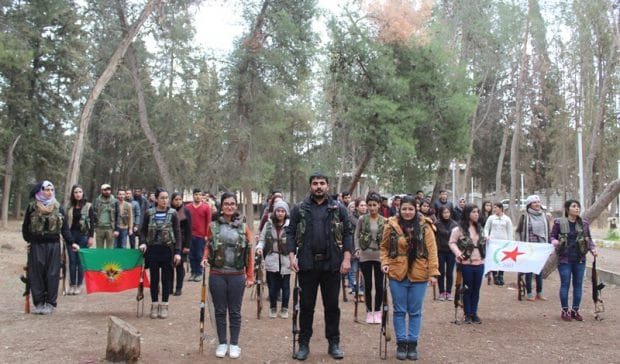 Turkey under pressure over offensive but Russia quiet and US split

The Kurdish militia YPG says it has stalled a five-day Turkish-rebel offensive in northwest Syria, regaining territory in the Afrin canton lost in initial attacks.

The YPG said it had retaken the high ground of Mount Bursaya, which Turkish and rebel forces had claimed on Sunday in the first day of their ground assault. The area is important, according to pro-opposition activists, because the YPG uses it to shell both the opposition-held town of Azaz and the Turkish town of Kilis.

Pro-Turkish outlets claimed that the Turkish-rebel force still holds part of the mount.

The YPG also said it had reclaimed villages such as Kurni near the Syrian-Turkish border.

In contrast, the Turkish military asserted — without support — that it has killed at least 260 YPG fighters and Islamic State members in the offensive so far.

The military said three Turkish personnel have been killed.

To justify the offensive, Ankara’s officials have claimed that ISIS militants, having been pushed out of almost all positions in Syria, are present in Afrin.

Spoke to 2 FSA fighters participating in the Efrin offensive. Both reported fierce clashes and acknowledged the serious fighting capability of the YPG members. The unfamiliar terrain makes advances challenging, they reported.

The US State Department @statedeptspox shoots down #Turkey gov't claim that #Afrin offensive is also against #Daesh in #Syria. "We do not see ISIS in that area", says Heather Nauert. pic.twitter.com/3Fv6tFnlyh

The Turkish military has posted a map of its planned “safe” area in northern Syria. Capture of the Afrin canton and of the area around the city of Manbij, held by the Kurdish-led SDF since 2016, would be added to a corridor along the Turkish-Syrian border — part of which was taken from ISIS by Turkish-rebel operations, part of which is controlled by the SDF after its defeat of the Islamic State.

Erdoğan’s spokesperson İbrahim Kalın said Turkey will cooperate with the US only if Washington ends its support to the YPG and retrieves arms given to the group. “Then we can talk about the future of Syria with them,” he explained.

Iran, an essential Assad regime ally, has also denounced Turkey but Russia, the leading outside political force in Syria and the regime’s other backer, has been muted in its response. The Kremlin said President Vladimir Putin had discussed the offensive with Erdoğan by phone, noting that Syria’s territorial integrity and sovereignty have to be respected and saying that both men stressed the importance of continuing joint efforts to find a peaceful resolution to Syria’s 82-month conflict.

Turkish Foreign Minister Mevlüt Çavuşoğlu said Ankara wants to avoid any clash with US, Russian, or Assad regime forces but will take all necessary action for Turkey’s security.

He targeted US support of the YPG, including through the Syrian Democratic Forces created in autumn 2015 to fight ISIS: “The future of our relations depends on the step the United States will take next.”

A UN report, citing local sources, said about 5,000 people in Afrin have been displaced with others too vulnerable to flle. It said the UN is ready to provide aid to 50,000 residents.

With its policy under pressure from the Turkish-rebel offensive, the US Government split on Tuesday, with the White House backing away from support of the YPG but the Pentagon maintaining a US plan for a border security force led by the militia.

A “senior administration official” insisted that a plan for the 30,000-strong force, half of which would come from the Syrian Democratic Forces, originated with mid-level military planners in the field and was never seriously debated by the White House or National Security Council.

But on Tuesday the Pentagon stuck by the initiative. Spokesman Maj. Adrian Rankine-Galloway said:

US forces are training local partners to serve as a force that is internally focused on stability and deterring ISIS. These local security forces are aimed at preventing the potential outflow of fleeing ISIS terrorists as their physical presence in Syria nears its end and pending a longer-term settlement of the civil war in Syria to ensure that ISIS cannot escape or return.

Military officials played up the US relationship with the Syrian Democratic Forces as they announced that about 150 ISIS fighters had been killed in an American airstrike on Saturday. Maj. Gen. James Jarrard, the commander of Special Operations forces in Iraq and Syria, said:

But the Administration official further distanced the White House from the Kurdish militia by saying the US had no connection to the Afrin canton.

Despite declaring a “de-escalation zone”, Russia has carried out numerous airstrikes in support of a pro-Assad offensive trying to regain territory in the province, almost of all of which has been held by opposition since spring 2015.

Video: Pro-Assad Bombardment and Siege of East Ghouta Near Damascus

A BBC report on the ongoing pro-Assad assault on the East Ghouta area of Damascus, including chemical weapons, shelling and airstrikes, and a deadly, tightening 5-year siege:

The BBC has obtained shocking footage from the war-ravaged area of Eastern Ghouta in Syria
*This report contains some upsetting images* pic.twitter.com/YObSDsQHGX