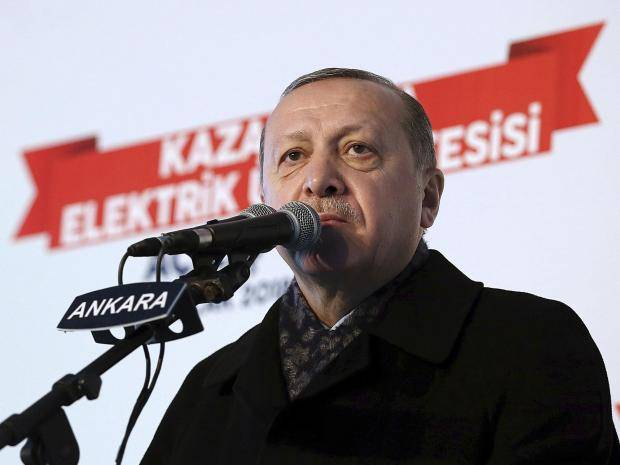 Erdoğan said on Monday in an address in Ankara, “What we are supposed to do is to drown this terror army before in comes into being.” He called the Kurdish militia “back-stabbers” who will point their weapons at the US in the future.

Last weekend the US-led coalition confirmed reports that it is planning a 30,000-strong force along the Turkish and Iraqi borders. Half will be drawn from the Syrian Democratic Forces, led by the Kurdish militia YPG, and half will be recruited.

The coalition said there will be an initial group of about 230 trainees.

A country we call an ally is insisting on forming a terror army on our borders. What can that terror army target but Turkey?…

This is what we have to say to all our allies: don’t get in between us and terrorist organizations, or we will not be responsible for the unwanted consequences. Don’t force us to bury in the ground those who are with terrorists. Our operations will continue until not a single terrorist remains along our borders, let alone 30,000.

Visiting Canada, Foreign Minister Mevlüt Çavuşoğlu added that “an army from YPG terrorists will only cause chaos in the region”: “The US must clarify which side it is on, whether it chooses to be with its allies or terror groups.”

Ankara considers the YPG, the militia of the Syrian Kurdistan Democratic Union Party (PYD), to be part of the Turkish Kurdish insurgency PKK.

Continuing his threat, Erdoğan declared that a Turkish assault on the Kurdish canton of Afrin in northwest Syria “may start any time” and promised “operations into other regions will come after”.

Turkish forces have been shelling Afrin but so far there is no sign of a ground offensive. Last Friday, the Turkish President issued a one-week ultimatum for the YPG to withdraw from the Kurdish canton of Afrin in northwest Syria and from the city of Manbij in eastern Aleppo Province. If they remained, Erdoğan said, Turkish forces will overrun the areas to clear the “terrorists”.

The Turkish President added a message for Washington, “Take down your flags above the terror organisation, so that we will not need to hand them over to you.”

To prevent any attack…there must be a deterrent force that protects the border between our areas and the others. And we must protect the gains we have liberated….

Until a political settlement is reached in Syria, these areas need protection. Now, there aren’t any guarantees. These forces are Syrian and will protect Syrian land from aggressors.

But the Assad regime and its backers Russia and Iran also lined up against the force.

The regime opposes a federal Syria in which Kurdish groups have an autonomous area. Senior advisors to Bashar al-Assad have threatened a showdown with the Syrian Democratic Forces, created by the US in autumn 2015 to push back the Islamic State in northern and eastern Syria.

The Foreign Ministry denounced the new border force as a “blatant assault” on sovereignty and said any Syrian who joined the force is “a traitor”: “What the American administration has done comes in the context of its destructive policy in the region to fragment countries…and impede any solutions to the crises.”

The actions that we see now show that the United States does not want to maintain the territorial integrity of Syria. Fundamentally, this means the breakup of a large territory along the border with Turkey and Iraq.

And Nasr al-Hariri, the head of the opposition High Negotiations Committee, cautioned, “A large, separate Kurdish force might open the door for a new political struggle in the region. “Any force based on ethnicity or religion will be harmful to a political solution”.

Footage from some of the latest pro-Assad airstrikes on opposition-held Idlib Province in northwest Syria, with seven civilians killed in the village of Tabesh:

The head of the UN Development Program in Syria, David Akopyan, praises State media’s account of his meeting with the
Local Administration and Environment Minister Hussein Makhlouf:

It summarized that Akopyan suggested a focus on “specific projects according to the needs of each province and boosting cooperation to include the environment sector”, and that the UN official will start with a tour of Homs and Aleppo.

In which the country Director of UNDP Syria suggests we read a write-up of his "excellent meeting" with a Syrian government minister on…SANA. When the UN are using state media as their PR's I don't know if there's even any point trying to point out how they might do better. https://t.co/hzdI9Qr0aP

Akopyan, who posted a series of pictures of his appearances with regime ministers and local officials, later tweeted:

Life is coming back to Allepo pic.twitter.com/IVT4s1qUKp

He defended his promotion of the encounter with Makhlouf about rebuilding infrastructure, much of it has been bombed by the regime: “Frankly for me news are not official or fake not fake but whether they reflect reality or not. My key message was about agreeing for us UNDP to work in all regions of Syria no region left behind and he was open to this.”

As Akopyan discussed development and infrastructure, pro-Assad forces were destroying another facility in Idlib Province in northwest Syria: