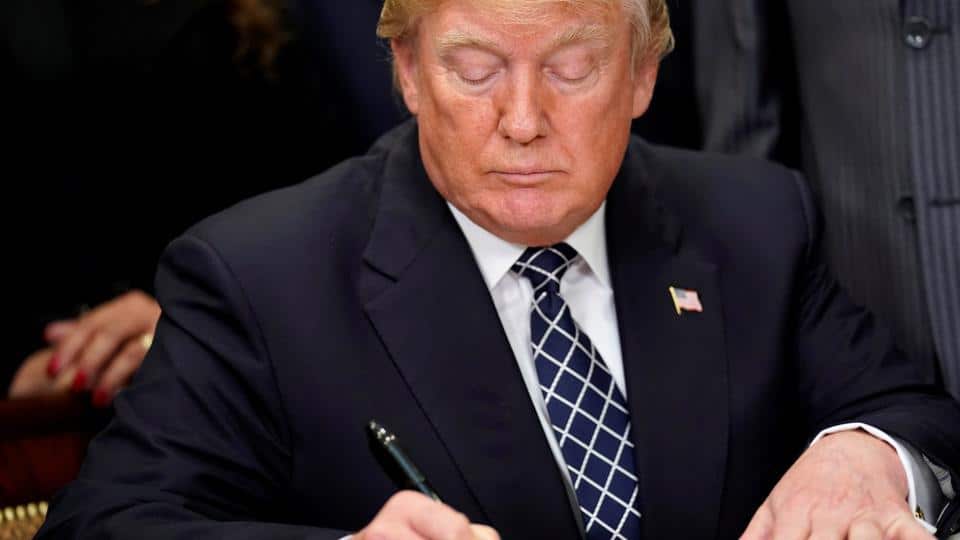 US imposes sanctions on more Iranians, including head of judiciary Larijani

Donald Trump has extended the waiver of Congressionally-mandated sanctions on Iran, but said it is for the last time.

Trump met a Friday deadline for the signature, while saying that changes in the July 2015 nuclear agreement must be negotiated with European partners within 120 days or the US will leave:

Today, I am waiving the application of certain nuclear sanctions, but only in order to secure our European allies’ agreement to fix the terrible flaws of the Iran nuclear deal.

This is a last chance. In the absence of such an agreement, the United States will not again waive sanctions in order to stay in the Iran nuclear deal. And if at any time I judge that such an agreement is not within reach, I will withdraw from the deal immediately.

Either fix the deal’s disastrous flaws, or the United States will withdraw.

Trump, who has repeatedly criticized the “bad” and “unfair” deal that limited Iran’s nuclear program, has reportedly always favored withdrawal. However, he has been held back from the step by advisors who warn that it will isolate the US and that Iran will soon return to the enrichment of 20% uranium and develop a more efficient process.

He said on Friday, “I have been very clear about my opinion of [this] deal. It gave Iran far too much in exchange for far too little.”

New Sanctions on Individuals and Entities

In a sign of the Administration’s escalating pressure on Iran, the Treasury added 14 Iranian individuals and entities to existing US restrictions.

The most notable name on the list is Sadeq Larijani, head of Iran’s judiciary and brother of Speaker of Parliament Ali Larijani.

A Treasury spokesperson said the sanctions are related to “serious human rights” abuses, censorship, and weapons issues. Larijani was said to be “responsible for ordering, controlling, or otherwise directing, the commission of serious human rights abuses against persons in Iran or Iranian citizens or residents”.

Iranian Foreign Minister Mohammad Javad Zarif, who has been in Moscow and Brussels this week in Iran’s effort to split European countries from the US, reacted on Twitter:

Trump's policy & today’s announcement amount to desperate attempts to undermine a solid multilateral agreement, maliciously violating its paras 26, 28 & 29. JCPOA is not renegotiable: rather than repeating tired rhetoric, US must bring itself into full compliance -just like Iran.

The European Union, the UK, France, and Germany — all signatories to the agreement — maintained their support for the Joint Comprehensive Plan of Action during meetings with Zarif on Thursday. They implicitly chided the US for threatening to withdraw.

At the same time, the EU and France have indicated that they would like a separate accord covering Iran’s ballistic missile testing and development, raising Iranian objections.

The Islamic Republic of Iran stresses clearly that it will take no measures beyond its commitments under the JCPOA [Joint Comprehensive Plan of Action] and will accept no changes to this agreement now or in the future and will not allow that the JCPOA be linked to any other issue.

See Donald Trump is a Racist Who Preys on the Helpless

Unfortunately, today the head of government in the US is so ignorant as to use the foulest language about the nations, which is quite unacceptable and even unbelievable.

Such vulgar language has been spoken by someone who calls himself the head of the government. Such a culture, perspective, and paradigm blocks the way toward constructive dialogue.

The Foreign minister contrasted Trump’s attitude with an international endeavor to build a better world: “We have no way but to engage in dialogues based upon mutual respect and the effort to arrive at a common understanding.”

A UN panel has concluded that Iran violated an embargo on arms to any faction in Yemen’s civil war.

The panel said Tehran failed to prevent the insurgents of Ansar Allah (Houthis) from obtaining Iranian missiles, including one fired at Riyadh Internatonal Airport in Saudi Arabia in early November.

The report will be presented to the Security Council this week. It did not say Iran had supplied missiles, but concluded that “the Islamic Republic of Iran is in noncompliance” by not ensuring that its weapons did not wind up in Houthi possession.

More than 10,000 people have been killed in the Yemen conflict, many by the operations of a Saudi-led coalition fighting the Houthis. Millions have been displaced and are at risk of acute hunger and malnutrition. One million have been infected with cholera.