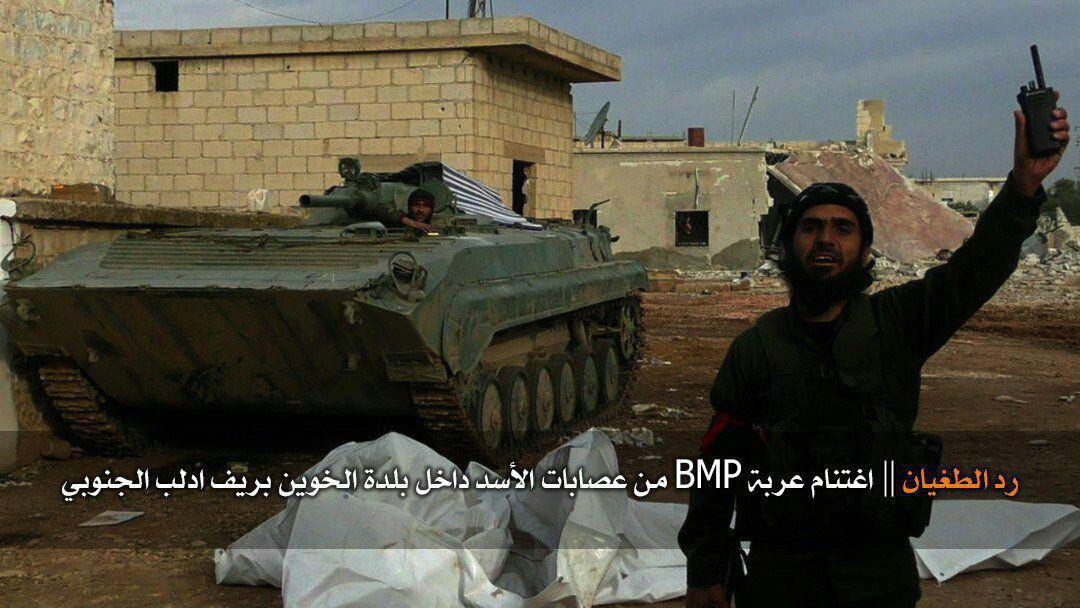 Activists say nine people were killed, including women and children, in Khan al-Subol. Two were killed in Maasran. Khan Sheikhoun and Jisr al-Shughour was also targeted, but no casualties were reported.

Graphic photos have been posted of victims.

Pro-Assad accounts tried to portray a successful fightback by the regime and its foreign allies on Friday; however, their claims of retaken territory and a renewed assault on the Abu Duhur airbase are unconfirmed.

In recent weeks, the pro-Assad units re-entered Idlib, almost all of which has been held by the opposition since spring 2015. Supported by Russian airstrikes, they proclaimed earlier this week that they were poised to take the Abu Duhur base, with the frontline only 2 km away.

On Thursday, rebels cut into the western side of the regime salient. Meanwhile, the Islamist jihadist bloc Hayat Tahrir al-Sham attacked the eastern side. Turkey, which has been warning the regime to stop attacking civilians in Idlib and calling on Russia to hold back Damascus, supported the rebels with mine-resistant vehicles, ammunition, RPGs, mortars, Grad rockets and launchers, and tank shells.

Pro-opposition outlets claim that the regime moved forces on Friday from Homs Province, including the ancient city of Palmyra, towards the Idlib frontline.

The Assad regime’s military has refused to acknowledge any rebel success in the counter-offensive, while acknowledging that there has been heavy fighting.

However, in a sign of concern, the regime complained that “terrorists from the Turkestan Islamic Party” — one of the factions in the counter-offensive — “with the direct support, direction and planning of the Turkish regime, brought most of their forces… to start their attack”.

President Recep Tayyip Erdoğan has given Kurdish militia a one-week ultimatum to withdraw or face attack in Afrin in northwest Syria and in Manbij in eastern Aleppo Province.

“In Manbij, if they break the promises, we will take the matter in our own hands until there are no terrorists left. They will see what we’ll do in about a week,” Erdogan told members of the ruling AKP. “If the terrorists in Afrin don’t surrender, we will tear them down.”

Erdoğan has periodically threatened an assault on Afrin, one of three Kurdish cantons in Syria, but has not yet followed through. However, in a possible shift towards a more aggressive stance, Ankara has stepped up criticism in recent weeks of US arms supplies to the Syrian Democratic Forces, led by the Kurdish militia YPG.

Turkey considers the Syrian Kurdish Democratic Union Party (PYD) and its YPG militia to be part of the Turkish Kurdish insurgency PKK.