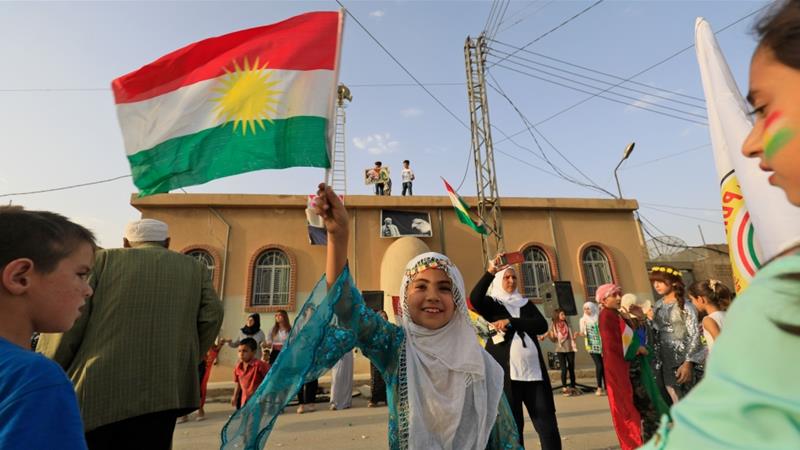 For the first time, the Assad regime has said that it will consider autonomy for Syria’s Kurds.

Foreign Minister Walid al-Moallem said on Tuesday that discussions for greater powers for Kurdish authorities can begin as soon as the Islamic State is defeated.

The Syrian Kurds want a type of self-management within the borders of the Syrian Arab Republic, and this issue is negotiable and can be discussed, and when we eradicate ISIS, we can sit with them and agree on the shape of the future.

Previously the regime has held out against any Kurdish regional or local control, saying this would violate the sovereignty and territorial integrity of Syria.

However, the advance of the Kurdish-led Syrian Democratic Forces against ISIS across north and northeast Syria since autumn 2015 has established a de facto Kurdish rule over some areas, and there have been periodic disputes in the city of Hasakah, divided between Kurdish and regime forces.

The issue is now at a flashpoint because of the offensives of pro-Assad forces and the SDF, both taking territory from the Islamic Stae, in and near Deir ez-Zor city in eastern Syria. The two sides are on the point of confrontation — a possibility seen as inevitable by Bashar al-Assad’s senior advisor Bouthaina Shaaban — with claims of Russian bombing of the SDF as pro-Assad forces defied the Kurdish-led group by crossing to the eastern bank of the Euphrates River.

The SDF made further military and political moves last weekend, seizing a major gasfield and backing the creation of Deir ez-Zor provincial council of 100 tribal figures — days after people in Kurdish-controlled areas voted in the first of three stages for a regional assembly.

Moallem appeared to give some ground to those Kurdish initiatives. The regime, through Deputy Foreign Minister Feisal al-Mikdad, had denounced any Kurdish elections as a “joke”: “Syria will never ever allow any part of its territory to be separated.”

However, the commander of the SDF, Mazlum Kobane, cautioned in an interview with Al-Monitor:

The regime is a threat to us at present. There are also the Shiite groups aligned with the regime, which are a threat to us as well. We don’t want to fight with anyone, but we will defend ourselves. If the regime and its allies launch an operation against us, it will affect not only us, but I think it will lead to a fresh wave of chaos and instability in the region.

Expanding its stake in Syria’s infrastructure, Iran has announced plans for the construction of an oil refinery east of Homs.

Akbar Zamanian, an official in Iran’s petroleum industry, said on Tuesday that the refinery will have a production capacity of 140,000 barrels per day.

Zamanian said a consortium also including Venezuela will build the plant after fighting ends in Syria. He added that Iran will rebuild two existing refineries.

Another official said the Homs project will require $1 billion in investment.

As its involvement in the Syrian conflict has expanded, Iran has pursued long-term construction and energy projects, including in southern Damascus. Earlier this year, Iranian interests claimed phosphate mines, and two weeks ago, Tehran signed deals with the Assad regime to repair Syria’s power grid, including construction of a power plant in Latakia Province, restoration of the main control center in Damascus, and revival of a power station in Deir ez-Zor Province.

Another Confirmed Death of Tortured Detainee

Amnesty International posts confirmation of the death of another detainee in Assad regime’s prisons:

News of death of Hazem Hariri (22 y/o) under torture in custody, a student & musician detained by Syrian gov in #Damascus in 2013 #syria pic.twitter.com/A7EDDNz2cK

Thousands of Syrians have died in regime detention amid abuse and torture, many of them since the start of the uprising in March 2011.

Videos document the renewed destruction of hospitals in opposition-held Idlib Province, following the resumption of Russian and regime airstrikes on September 19 despite the Russian-declared “de-escalation zone”.

Journalist Bilal Abdul Kareem in an underground hospital damaged by the attacks:

The al-Sham underground hospital in Kafranbel:

Several medical facilities and civil defense centers have been struck in the past eight days, adding to the scores destroyed or damaged by Russian warplanes since Moscow’s intervention in September 2015.

The latest Russian-regime operations to degrade vital infrastructure were launched using the pretext of attacks by rebel factions and the jihadists of Hayat Tahrir al-Sham on regime positions in neighboring northern Hama Province on eight days ago.

More than 40 people were killed on Monday, the deadliest daily toll in Idlib Province for months.

Resident of Saraqib, Idlib: Just nuke us and get it over with. pic.twitter.com/EQFUYxDIug