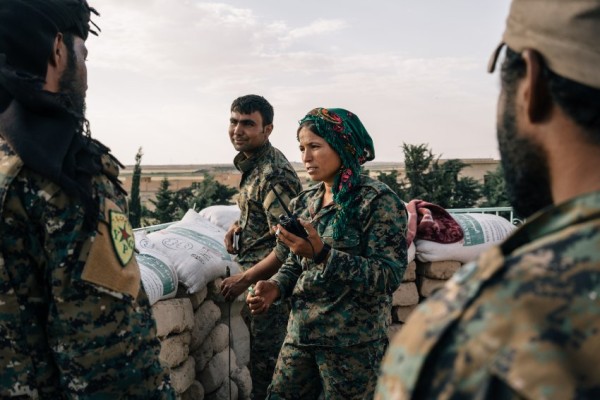 The Kurdish-led, US-backed Syrian Democratic Forces advanced further on Sunday inside the city of Raqqa, the Islamic State’s central position in Syria.

The SDF took the al-Qadisia district, their sixth in Raqqa, after three days of intense fighting.

After months of preparation and political maneuvers, the SDF finally moved into Raqqa in early June, backed by US weapons, special forces, and airstrikes. They have advanced from both the west, where al-Qadisia is located, and the east, and have cut off ISIS to the south by taking positions along the Euphrates River.

Several hundred civilians have been killed in and near Raqqa this year. The head of the UN inquiry team on Syria spoke in mid-June of the “staggering” death toll and said 160,000 people had been displaced from the area.

Erdoğan: US Arms to Kurdish YPG Violates NATO Treaty — “You Will Not Have a Future with Us”

Turkish President Recep Tayyip Erdoğan has renewed his attack on US support to the Kurdish militia YPG, the leading element in the SDF, declaring that weapons supplies are a violation of the NATO Treaty.

“We will be together in NATO, and you will act together with terrorist groups. What kind of business is this? In this case, the NATO treaty should be revised,” Erdoğan said on Sunday at a rally of his Justice and Development Party (AKP).

Turkey considered the Syrian Kurdish Democratic Party (PYD) and its YPG militia to be part of the Turkish Kurdish insurgency PKK, which has fought Ankara’s security forces for more than 30 years.

In May the Trump Administration formally confirmed the arrangement, established soon after the SDF’s creation in autumn 2015, of US weapons supplies to the forces, despite Washington’s designation of the PKK as a terrorist group.

“Unfortunately, the countries we say are our allies, countries we consider friends see no problem in cooperating with terror organizations targeting Turkey’s unity,” Erdoğan said on Sunday. He continued:

Those who think that they can fool Turkey by saying that they will get those weapons back will eventually understand the vital mistake they made, but it will be too late. We will call to account the real owners of those weapons for every drop of blood they shed with those weapons.

I don’t know what kinds of a future you will have in Syria with the terrorist organization you chose, but you must know that you will not have a future with us.

Erdoğan also denounced the US for its refusal to extradite his former ally Fethullah Gülen, a cleric whom the President accuses of being behind an attempt to overhim him last July: “You inflict deep wounds in Turkey’s heart by harboring a terrorist leader who led a coup attempt in our country.”

The Assad regime has allowed the first overland delivery of aid to the mainly-Kurdish city of Qamishli in northeast Syria since December 2015.

The area has been inaccessible until recently because the Islamic State held much of the territory between Damascus and Qamishli. The World Food Program had to airlift assistance to about 190,000 people, with two flights per day, six days per week.

However, with the capture of the city of Manbij by the Kurdish-led Syrian Democratic Forces this spring, the land route was established.

A convoy of three trucks carried food from Damascus to the city’s residents, including newly-displaced people from the SDF offensive on ISIS-held Raqqa. The delivery provides a month’s supply of food for 15,000 people.

“This humanitarian breakthrough will allow us to increase regular support for all 250,000 people in need in Hasakeh, compared to the 190,000 people we were able to assist through airlifts,” said Jakob Kern, WFP Country Director and Representative in Syria. “Road deliveries are also far more cost-efficient.”

The Assad regime has blocked almost all assistance to opposition areas, with the UN unable to make any deliveries for almost two months.