Assad Regime Struggles to Control Its Militias in Aleppo 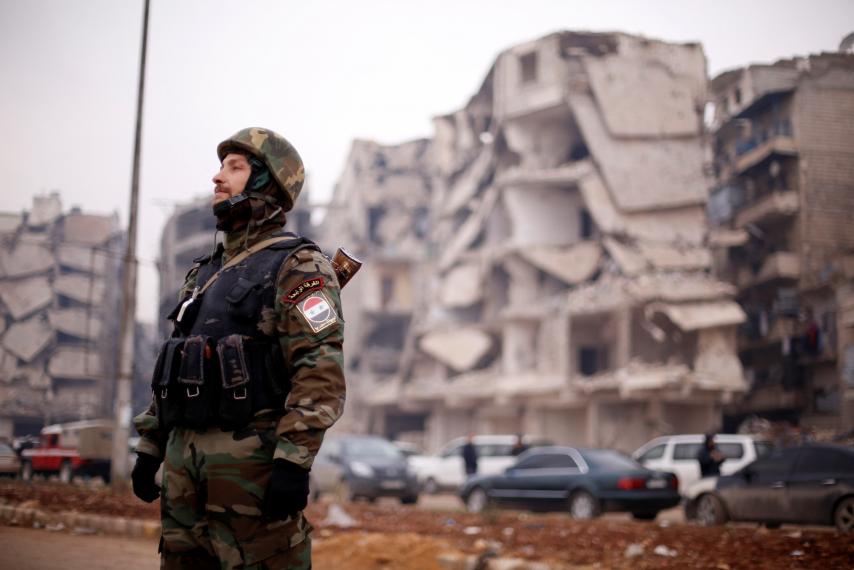 Writing for IRIN, Aron Lund documents the Assad regime’s problems with militias since it reclaimed all of Syria’s largest city Aleppo in December.

The catalyst for a possible crisis came earlier this month when 13-year-old Ahmed Jawish, in an upscale district in western Aleppo, was shot in the head and killed by man in military fatigues. The teenager’s offense was leaning into the man’s car to sell gum and crackers.

Militiamen were also accused of kidnapping and rapes, including of a 17-year-old girl in the Sayf Dawlah neighborhood and of a girl in public in the Maydan section, dispersing bystanders with live fire. There were two separate incidents of children being run over, and elderly men being arrested and beaten.

The regime announced a crackdown, with State Security and Air Force Intelligence troops began rounding up militiamen in the Adhamiya, Akramiya, and Seif al-Dawla neighbourhoods. Fares al-Shehabi, an Aleppo businessman who is one of the regime’s leading propagandists on social media and interviews, proclaimed, “So far, the government arrested hundreds of them. Many more will be arrested.”

But Lund notes the extent of extortion through “escorting”, in which civilian trucks carrying goods or aid to Aleppo are forced to pay fees of up to 200,000 Syrian pounds ($400) to be accompanied by militia from one checkpoint to the next.

In February, Prime Minister Emad Khamis’s office released a statement insisting “escorts are not compulsory” and “any checkpoint that mandates them must be reported, in order for the competent authorities to take appropriate measures”. The Damascus Chamber of Industrialists called for a ban on the practice, and the regime’s chief security officer in Aleppo, acting on instructions of the National Security Office, decreed a ban in May.

But as Lund critiques:

Systemically corrupt and prone to political inertia, the Baathist state is now more than ever embedded in local factions that jealously guard their prerogatives. Municipal and city officials are often unable to act without top-level decision makers at their back, and the various security branches tend to balance each other out. Since so many officials are complicit in militia corruption, moving against any one group of offenders would be seen as intrusion on another commander’s turf.

In practice, therefore, very little tends to happen unless the powers that be in Damascus decide to get involved, typically by sending a direct order or an emissary to take personal charge and corral rival interests into action.

In mid-June after the symbolic killing of Ahmed Jawish, the reigme dispatched Lieutenant General Mohammed Dib Zeitoun, the head of State Security, to Aleppo to deal with the militias

De facto spokesman al-Shehabi maintains, “Nothing is out of control. After the recent crackdown, the people of Aleppo are happy and safe again.”