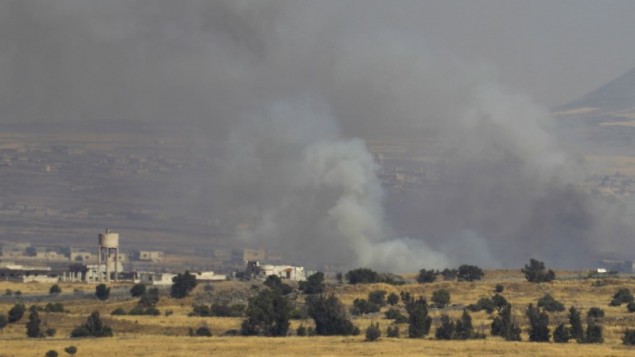 Assad Regime Struggles to Control Its Militias in Aleppo

UPDATE 1600 GMT: Israel has retaliated with an airstrike for the second time in two days, following more cross-border mortar fire into the Israeli-occupied Golan Heights.

The Israeli Defense Forces claimed the mortar fire was the seventh incident in a week.

Israeli Prime Minister Benjamin Netanyahu at today’s Cabinet meeting: “We will respondly strongly to any attack on Israeli citizens.”

The Israeli Defense Forces said it responded after the mortar shells landed inside the Israeli-occupied Golan Heights. The IDF said the mortars appeared to be errant fire from Syrian factions fighting each other near the border.

In response to over 10 projectiles launched from Syria, IAF aircraft targeted origin of launches & 2 Syrian tanks

The Assad regime’s military confirmed several deaths amid fighting with rebels in Quneitra Province. It initially did not say if Israel had hit military positions; however a “military source” later said that, in the “unacceptable breach” of sovereignty, “rocket fire” hit a residential building, causing a number of deaths and damage. He claimed that the Israelis were supporting the jihadist faction Jabhat al-Nusra in clashes with regime forces.

The source did not mention regime fire into the Golan Heights.

We will respond strongly, resolutely and with level-headedness to any such case. As far as we are concerned the Assad regime is responsible for what occurs in its territory and will continue to suffer the consequences if such events recur.

Israel has attacked inside Syria on several occasions since the conflict began in March 2011. The Israelis have been concerned with hitting weapons supplies — both in convoys and in warehouses — for Hezbollah, and on keeping Iranian-led militias and Hezbollah forces out of the area near the Golan Heights. The IDF has also retaliated against regime cross-border fire in the past as a warning to prevent any recurrence.

Israeli media, citing an “European diplomatic source”, said Israel has been warning Iran that it “will not tolerate” the ongoing armament of Hezbollah. The Israelis have sent the message via “friendly nations who also have diplomatic relations with Tehran”.

Last week, Hezbollah leader Hassan Nasrallah said on Friday that a war with Israel could bring “hundreds of thousands of fighters from all over the Arab and Islamic world to participate – from Iraq, Yemen, Iran, Afghanistan and Pakistan”.

Iran: Our Missiles Really Did Hit Their Targets

Iran’s Revolutionary Guards have tried another explanation to declare that their first missile strikes inside Syria did hit Islamic State targets.

The Guards said it fired six missiles last Sunday from western Iran across Iraq on the city of Mayadin in eastern Syria, killing ISIS commanders and fighters — numbers claimed have ranged from 50 to 300 — and destroying buildings.

The head of the Guards’ Aerospace Division, General Amir Ali Hajizadeh, declared on Sunday that the missiles were two-stage, so “the engine separates from the warhead” — thus indicating that it was the engines which had dropped short of the ISIS positions, including inside Iraq: “Pity those who call themselves experts and do not understand that these were the first-stage engines (that fell), while the warheads hit targets.”

Iranian reports are now saying that the Guards used Qiam missiles, which have detachable warheads, as well as Zulfiqars.

Hajizadeh claimed “tremendous damage” was caused to ISIS, with the killing of more than 170 IS fighters, including a number of commanders. He said 0ne missile also struck a 28,000-liter fuel tanker, sparking a “huge” blaze.

Radwan Ziadeh — a leading Syrian dissident and academic and former spokesman for the opposition Syrian National Coalition — has been denied political asylum by the US Government.

Ziadeh lives in a suburb of Washington DC. He has received fellowships at Harvard, Georgetown, and the US Institute of Peace, which is funded by Congress, and testified before legislators.

But in a 12-page letter, Citizenship and Immigration Services claimed Ziadeh has provided “material support” to Syrian groups that are considered undesignated terrorist organizations.

US authorities cite Ziadeh’s organization of a series of conferences from November 2012 to May 2013 to discuss a democratic transition in Syria. Among those invited to the workshops, held in Istanbul in Turkey, were Free Syrian Army commanders and political leaders affiliated with the Syrian Muslim Brotherhood.

The US has supported the FSA during the Syrian conflict and has not designated the Syrian Muslim Brother — which is distinct from Muslim Brotherhood factions in other countries — as a terrorist organization.

“The U.S. administration, myself included, regularly spoke with members of the Syrian Muslim Brotherhood who were themselves members of Syrian opposition coalitions and delegations,” said Robert Ford, the former US Ambassador to Syria.

But Citizenship and Immigration Services said in its letter:

As both the FSA and the Syrian Muslim Brotherhood used weapons with the intent to endanger the safety of Syrian government officials, both groups have engaged in terrorist activity such that they met the definition of an undesignated terrorist organization…at the time you provided material support.

You have therefore ‘engaged in terrorist activity.

Ziadeh is appealing the decision.

The US military has said it will welcome a move by pro-Assad forces into Deir ez-Zor Province in eastern Syria, provided the offensive is against the Islamic State.

Colonel Ryan Dillon, a Baghdad-based spokesman for the US-led coalition, said of the regime and its allies — including Hezbollah and Iran-support foreign militias — pushing into the province:

If it looks like they are making a concerted effort to move into ISIS-held areas, and if they show that they can do that, that is not a bad sign,” Dillon said, referring to forces of Syrian President Bashar al-Assad. “We are here to fight ISIS as a coalition, but if others want to fight ISIS and defeat them, then we absolutely have no problem with that.

Pro-Assad offensives had raised the prospects of clashes both with the Kurdish-led Syrian Democratic Forces in Raqqa Province and with the Free Syrian Army in eastern Syria, near the Jordanian and Iraqi borders and south of Deir ez-Zor. The US has carried out its first airstrikes against pro-Assad forces, including the downing of a jet fighter and three sets of airstrikes on ground elements, in support of the SDF and to maintain a 55-km (34-mile) exclusion zone around the FSA base at Tanf.

US officials had also expressed concern that pro-Assad advances could establish Iran’s first ground route for personnel and weapons from Iraq into Syria.

The US envoy in the fight against ISIS, Brett McGurk, told a conference in Israel on Friday:

Our core coalition principle, and its remained consistent throughout, is that local people, Syrians and Iraqis, local to their particular village, town, or city, should be in charge of their areas after ISIS is defeated – not foreigners. All foreign fighters should leave Syria, period, whether fighting with Nusra or ISIS or Hezbollah. Any other formula fuels the conflict, places innocent Syrians between crossfires on their own land, and encourages extremists and spoilers on all sides.

McGurk asserted, “Nor can we allow Iran to jeopardize our gains and fuel instability in ISIS’s wake, by placing foreign proxies anywhere near the border regions with Jordan and Israel.”

In one of his rare ventures outside Damascus, Bashar al-Assad has appeared at prayers in Hama to mark Eid al-Fitr, the end of the holy month of Ramadan: 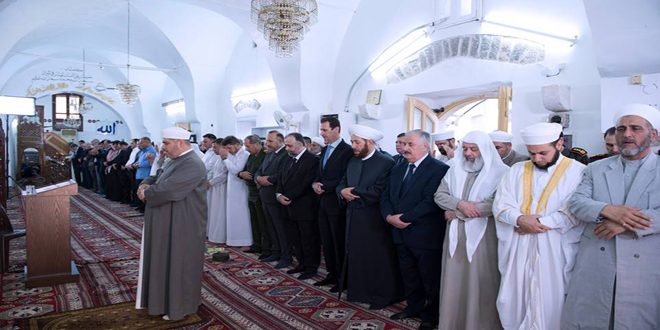 The regime declared the release of 672 people, including 91 women, for Eid al-Fitr to “sustain national reconciliations efforts and the homeland’s unity”.