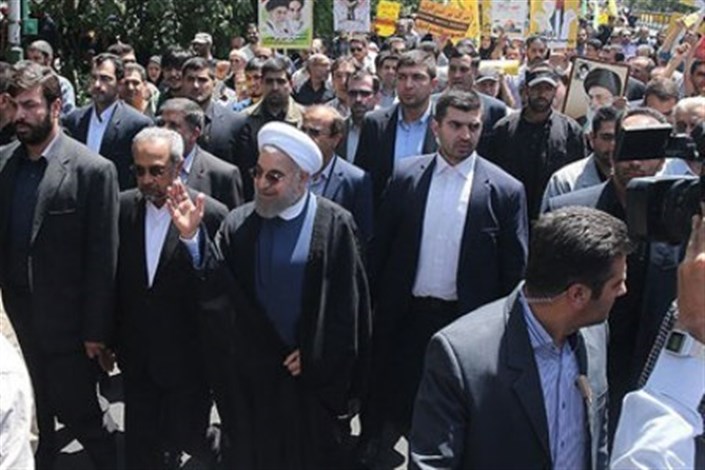 UPDATE 1615 GMT: Members of the Assembly of Experts, MPs, and Islamic scholars have issued a statement: “The reverence of the President is obligatory. Insulting Dr. Rouhani is against the national interests of the country and [those committing the offense] should be treated with serious misconduct.”

Referring to Rouhani’s May 19 re-election, the signatories said insulting the president is an insult to the millions of votes of the Iranian people.

ORIGINAL ENTRY: Following the rhetoric of Iran’s Supreme Leader, a crowd has heckled President Hassan Rouhani at one of the country’s most important rallies.

The incident occurred on Friday’s Qods (Jerusalem) Day, as Rouhani was marching. Protesters shouted slogans comparing him to Abolhassan Banisadr, the Islamic Republic’s first President who was impeached in 1981 and forced into exile.

“Rouhani, Banisadr, happy marriage,” protesters chanted and then shouted “Death to liar, death to American mullah”, as the President was rushed to his car.

Just over a week ago, the Supreme Leader slapped down Rouhani in a Ramadan ceremony:

“Mr President has talked at great lengths about the country’s economy and well, he’s said, ‘This should be done’, ‘That should be done’. But who is he addressing by mentioning the ‘should dos’? Himself.”

As the audience laughed and Rouhani smiled uncomfortably, Khamenei then made the Banisadr comparison: “In 1980-1981 the then-President polarised society in two camps, and divided the country into opponents and supporters; this should not be repeated.”

Rouhani refused to back down, aiming at the Revolutionary Guards in an iftar dinner breaking the Ramadan fast on Thursday. He told businessmen that his administration “has been committed to the real transfer of the economy to the private sector”, contrasting this to the privatization ordered by the Supreme Leader in 2006 during the Ahmadinejad administration.

Khamenei’s office supported Rouhani’s opponent, hardline cleric Ebrahim Raisi, in the election. During the campaign, the Supreme Leader issued a series of statements to keep Rouhani “in his box” should the President retain office.

Khamenei has maintained the pressure after the President’s unexpectedly large victory on May 19, including criticism that privatization has not been implemented properly and the demolition of the UN’s Education 2030 program for access to global learning, which the Rouhani Government had supported.