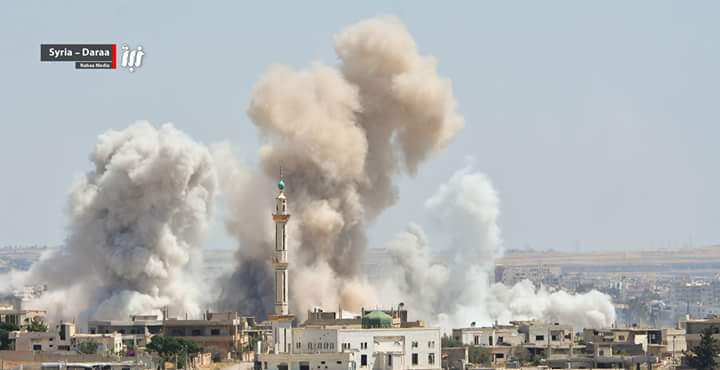 Pro-Assad forces are continuing their bombardment of Daraa, the birthplace of Syria’s uprising in March 2011.

The Assad regime and its allies have bombed, shelled, and rocketed the city, in the south near the Jordanian border for months; however, the assault has escalated in the past weeks, with hundreds of munitions fired, including barrel bombs and “elephant” rockets.

Initially, the attacks were to check a rebel advance inside the city which took most of the strategic building of Manshiyah, home to many regime and security buildings. But rebel commanders are now warning of a pro-Assad counter-offensive trying to reclaim all of Daraa, divided since 2012. Hezbollah and Iranian-led Iraqi militias are among the pro-Assad ground forces.

Claims this morning include 17 surface-to-surface missiles, 12 barrel bombs, and six airstrikes on the Old City section of Daraa.

“The regime has brought large columns of troops from the elite 4th Armoured Division, and also Hezbollah forces,” said Major Issam al-Reis, spokesman of the Southern Front bloc. “Everything indicates the regime is preparing for a large-scale military campaign in Daraa in which they plan to encircle the city and reach the Jordanian border.”

Adham al-Karad, the commander of the Southern Front’s missile brigade, added: “Our surveillance shows troop carriers and heavy armor….If it continues at this same level of reinforcements, this will be very large.”

The Free Syrian Army said it blocked the latest attempt by pro-Assad forces from entering the Daraa camp for displaced persons, despite heavy aerial and missile bombardment. It claimed it killed six troops, including Colonel Ahmad Tajo, a commander of the elite 4th Division.

The FSA acknowledged the loss of one of their military commanders, Farhan Hammadi, in the battle.

Officials said last week that Russia and the US, through their special envoys for Syria, are in discussions over a “de-escalation” zone for southwest Syria which includes part of Daraa Province. However, it was unclear if the zone will cover Daraa city.

Iran’s regime has renewed its declarations that — contrary to all evidence in the air and on the ground inside Syria — the US is supporting the Islamic State.

We are facing a proxy warfare in the region as a new trick by the arrogant powers against the Islamic Republic.

As the Supreme Leader of the Islamic Revolution, said, we possess documents and information showing the direct supports by the US imperialism for this highly disgusting stream in the region which has destroyed the Islamic countries and created a wave of massacres and clashes.

Izadi did not produce any of the documents. The US has been engaged in an aerial campaign against ISIS since September 2014, and has been working with ground forces — notably the Kurdish-led Syrian Democratic Forces and the Free Syrian Army — pushing back the Islamic State in northern and eastern Syria.

The Iranian revision of the facts may be to press the US to pull back from both the north and east as pro-Assad forces approach the lines of both the SDF and the FSA. Within the past month, the US has carried out three sets of airstrikes against pro-Assad forces — including Hezbollah and Iranian-backed Iraqi militia — to keep them outside a 55-km (34-mile) zone around the FSA’s base, with US special forces, near Tanf on the Iraqi and Jordanian borders.

The Iranian Foreign Ministry added its condemnation of the US on Monday, with spokesman Bahram Qassemi asserting:

The Syrian issue is complicated. Unfortunately, the Americans show stronger presence in certain times when the terrorists are in an improper situation and they try to buy them time and change the power balance.

The US should allow Syria to make its efforts to restore stability and security and defend the country’s territorial integrity.

The offensive along the western bank of the Euphrates is gaining momentum in the northeast of the Aleppo province. Units of the Syrian armed forces and people’s militia have driven out militants of ISIS (former name of Islamic State) from such large cities as Maskanah, Ramtan, Shatna, and approached the city of Tabqa.

But Russian State outlet TASS does not quibble, headlining, “Syrian Government Forces Drive Out IS Militants from Three Big Cities”.

The significance of the pro-Assad advance, beyond the PR exaggerations of the Russians, is that it puts those forces close to the US-supported, Kurdish-led Syrian Democratic Forces as they try to overrun the Islamic State’s central position in northern Syria, the city of Raqqa.

Reports are circulating of in-fighting among rebel factions in al-Bab in Aleppo Province.

Several people were killed and scores injured, a rebel source said. The reasons for the clashes are not clear, but a local source said, “Some criminal gangs flying the independence flag were busted.”

Supported by Turkish airstrikes and weapons, rebels captured al-Bab, northeast of Aleppo city, from the Islamic State in February.