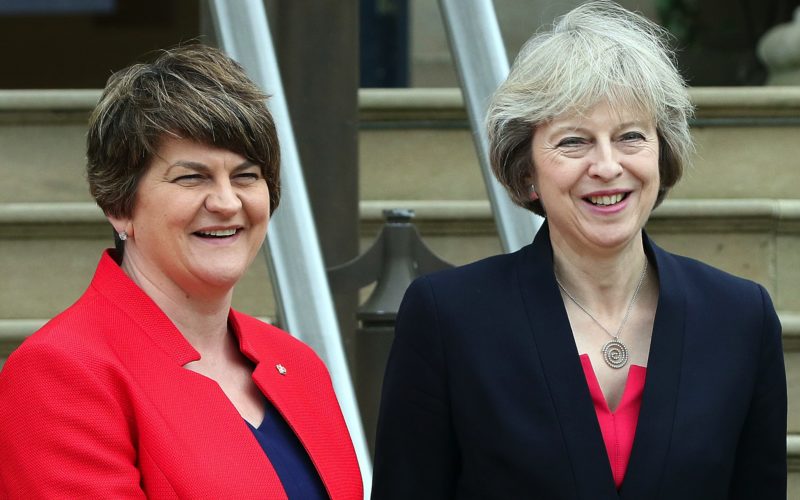 The unexpected outcome of the UK Parliamentary elections on Thursday has led the Conservative Government of Prime Minister Theresa May to approach an equally unexpected partner for essential support: Northern Ireland’s Democratic Unionist Party.

That choice raises a range of troublesome issues: the effect on the Northern Irish political situation; the question of government, given that there has not been a functioning Northern Irish government — led by the DUP — for months because of controversy over a renewable-energy scheme; the DUP’s denial of climate change and its embrace of creationism; and the party’s hostility to LGBT rights and its drive to restrict abortion.

And then there is the episode of Brexit and the DUP’s secret deal with a Saudi funder….

What Connects Brexit, the DUP, Dark Money, and a Saudi Prince?
Fintan O’Toole, The Irish Times

If Northern Ireland were a normal democracy, the election campaign would be dominated by a single question: how did the Democratic Unionist Party end up advancing the cause of a united Ireland through its support for Brexit? More specifically: what role did dark money play in that extraordinary decision? This story has all the makings of a John le Carré thriller but democracy on this island needs facts, not fiction.

To recap briefly: two days before the Brexit referendum last June, the Metro freesheet in London and other British cities came wrapped in a four-page glossy propaganda supplement urging readers to vote Leave. Bizarrely, it was paid for by the DUP, even though Metro does not circulate in Northern Ireland. At the time, the DUP refused to say what the ads cost or where the money came from.

We’ve since learned that the Metro wraparound cost a staggering £282,000 ($357,410) – surely the biggest single campaign expense in the history of Irish politics. For context, the DUP had spent about £90,000 ($114,070) on its entire campaign for the previous month’s assembly elections. But this was not all: the DUP eventually admitted that this spending came from a much larger donation of £425,622 ($539,433) from a mysterious organisation, the Constitutional Research Council.

The mystery is not why someone seeking to influence the Brexit vote would want to do so through the DUP. Disgracefully, Northern Ireland is exempt from the UK’s requirements for the sources of large donations to be declared. The mystery, rather, is who were the ultimate sources of this money and why was it so important to keep their identities secret.

The Constitutional Research Council is headed by a Scottish conservative activist of apparently modest means, Richard Cook. It has no legal status, membership list or public presence and there is no reason to believe that Cook himself had half a million euro to throw around. But the DUP has been remarkably incurious about where the money ultimately came from. Peter Geoghegan (sometimes of this parish) and Adam Ramsay of the excellent openDemocracy website did some digging and what they’ve come up with is, to put it mildly, intriguing.

What they found is that Richard Cook has a history of involvement with a very senior and powerful member of the Saudi royal family, who also happens to have been a former director of the Saudi intelligence agency. In April 2013, Cook jointly founded a company called Five Star Investments with Prince Nawwaf bin Abdul Aziz al Saud. The prince, whose address is given as a royal palace in Jeddah, is listed on the company’s initial registration as the holder of 75% of the shares. Cook had 5%. The other 20% of the shares belonged to a man called Peter Haestrup, a Danish national with an address in Wiltshire, whose own colourful history we must leave aside for reasons of space.

Prince Nawwaf, who died in 2015, was no casual investor. He had been Saudi minister for finance, government spokesman and diplomatic fixer before becoming head of intelligence. His son, Mohammed bin Nawwaf, has, moreover, been the Saudi ambassador to both the UK and Ireland since 2005. When Five Star was set up in 2013, Prince Nawwaf was 80, had suffered a stroke and used a wheelchair. It seems rather remarkable that he was going into business with a very minor and obscure Scottish conservative activist. But we have no idea what that business was. Five Star never filed accounts. In August 2014, the Companies Office in Edinburgh threatened to strike it off and in December it was indeed dissolved.

Ignorance is No Defense

It may be entirely coincidental that the man who channelled £425,622 to the DUP had such extremely high-level Saudi connections. We simply don’t know. We also don’t know whether the current Saudi ambassador had any knowledge of his father’s connection to Richard Cook. But here’s the thing: the DUP claims not to know either. And that is at best reckless and at worst illegal.

[DUP leader and Northern Irish First Secretary] Arlene Foster told the BBC in late February that she did not even know how much the mystery donor had given the party. Then the party, under pressure, revealed the amount, but insisted that ascribing the donation to Cook’s Constitutional Research Council was enough and people should stop asking questions. Then, in early March, [DUP MP] Jeffrey Donaldson told openDemocracy that the DUP did not need to know the true source of the money.

But this is simply untrue. The UK electoral commission is clear: “a donation of more than £500 cannot be accepted… if the donation is from a source that cannot be identified”. The legal onus is on the DUP to establish that the real donor was entitled to put money into a UK political campaign. If it can’t do that, it has to repay the £425,622. Since it has not done so, we have to assume it knows the true source is not, for example, a foreign government – which would be illegal.

The DUP has harmed Northern Ireland and endangered the union it exists to protect. How much did the lure of dark money influence that crazy decision? Any self-respecting voter would want to know.