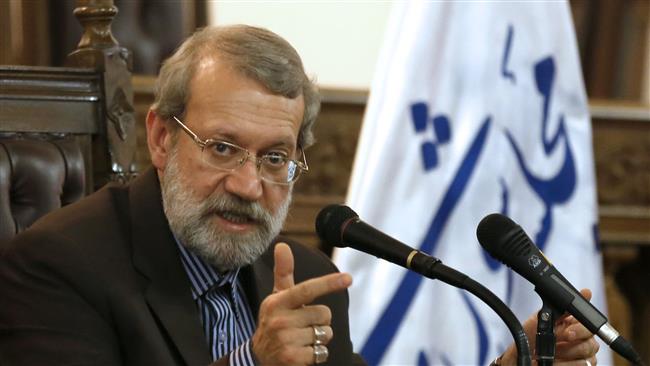 UPDATE 1230 GMT: Foreign Minister Mohammad Javad Zarif, arriving in Oslo on Monday to meet the European Union’s foreign policy chief Federica Mogherini and to participate in the Oslo Forum, says, “The US Senate sanctions bill against Iran shows the Americans’ shortsightedness and follows the same wrong policy that the US government has adopted, especially after the recent election”.

Zarif echoed the warning of Speaker of Parliament Ali Larijani that any new US measures “will be met with our response”.

The Iranian Foreign Ministry also showed its concern, with spokesman Bahram Qassemi saying, “The policy of sanctions is largely worn-out and failed, cannot meet any [US] demands, and is a futile attempt.”

Iran’s Speaker of Parliament has warned against any expansion of US sanctions threatening economic recovery.

Ali Larijani said the Majlis will deliver a “serious” and “clear” response to new measures being considered by the US Senate. He said he had ordered Parliament’s National Security Committee to “immediately” draw up a counter-plan and submit it for the legislature’s approval.

The US Senate bill would expand financial restrictions, citing Iran’s ballistic missile program, support for “terrorists”, and human rights violations. If passed, it would go to the House of Representatives for confirmation.

On Wednesday, the Senate voted 92-7 to end debate on the bill. A senior Senate aide said the chamber’s vote could be as soon as next week.

However, even if adopted, the legislation would have no practical effect. Last month Donald Trump quietly approved the extension of a Presidential waiver of Congressional sanctions. The US is still maintaining some restrictions, adopted by the Obama Administration, which have not been removed despite the nuclear deal of July 2015 between Iran and the 5+1 Powers.

The Speaker said Iran’s countermeasures will incorporate “resistance on the right path of the Revolution and increased convergence” in the face of “the enemy’s strategy…to slow down the means of Iran’s dignity, and preoccupy its authorities with extraneous issues”.

Larijani bolstered his statement by noting that Senators moved the sanctions closer to a vote as Iran suffered its first major attacks, reportedly by the Islamic State, in Tehran on Wednesday. At least 17 people were killed and more than 50 injured in the assaults on the Parliament building and the shrine of the founder of the Islamic Republic, Ayatollah Khomeini.

“We should accept that a line comprising terrorists and the countries backing them, which are being led by the United States and Saudi Arabia, has formed against our people,” he said.

After the implementation of the nuclear deal in January 2016, Iran’s economy grew about 7% during the year, largely because of a 40% recovery in oil exports. However, foreign trade and investment are still limited by the US restrictions on finance and banking, affecting sectors such as energy and transportation. While the Rouhani Government has reduced inflation from more than 40% to single digits, unemployment is still rising — officially it is 12.7%, but analysts say the true rate is much higher, especially among youth.