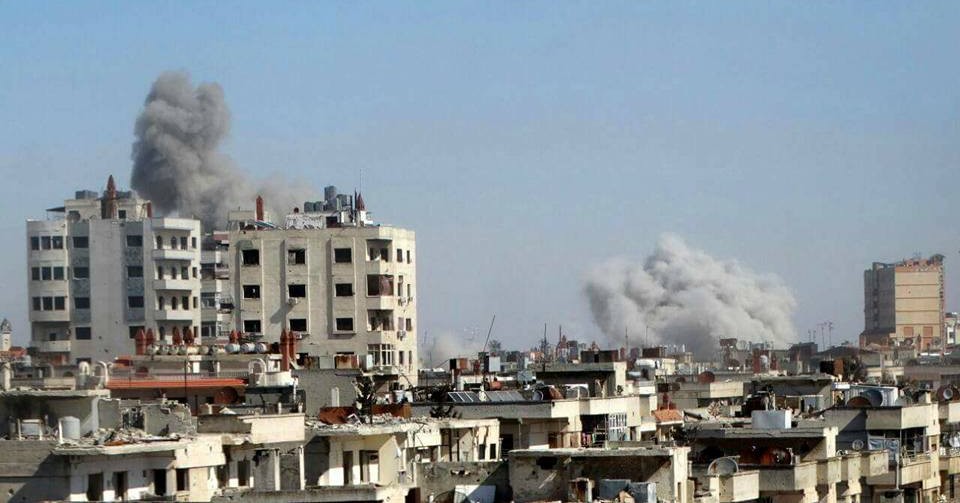 Defying the nominal ceasefire, pro-Assad forces bombed across Syria on Saturday, including opposition areas northeast of Damascus, Daraa Province in the south, and the last opposition-held district of Homs City.

Russia and Iran — the essential backers of the Assad regime — declared a truce on December 30, but it has never been observed by regime forces, who maintained an offensive to take the Wadi Barada area northwest of Damascus, continued the assault to the northeast, and bombed elsewhere.

On Saturday, pro-Assad forces bombed and shelled the Qaboun and Barzeh districts, killing at least 18 people, according to the Local Coordination Committees.

Retrieving the wounded in Qaboun:

Further south, warplanes — some claimed to be flown by Russia, rather than regime, pilots — have carried out at least 70 airstrikes since Friday in and near Daraa city. At least 12 people were killed.

And to the north, the pro-Assad air force and artillery struck the al-Wa’er district in Homs city, killing at least four people. More than 20 have died in almost two weeks of aerial attacks. The outlet of regime ally Hezbollah asserted that the bombardment followed rebel sniper fire.

TOP PHOTO: Smoke rises from a pro-Assad attack on the al-Wa’er section of Homs city on Saturday

Asked by Christiane Amanpour, “Where was your defensive nature [in the intervention]?”, Zarif initially tries to push the question onto the “wrong choices” of other powers. He then says that “it is your impression” that Assad has been a brutal, deadly oppressor of the Syrian people. Challenged again, he insists that the problem is the “decision to arm a group of terrorists”, rather than Assad’s behaviour.

The Foreign Minister also evades the issue of the Syrian regime’s use of chemical weapons.

"Where was the 'defensive nature' of your intervention on behalf of Bashar Assad in Syria?" I asked Iran's FM. https://t.co/edQ34kOP0m

Turkey has presented two proposals to the US for a joint assault on Raqqa, the central ISIS position in Syria, according to Turkish newspaper Hurriyet.

Hurriyet said that Turkish military chief Hulusi Akar and Joseph Dunford, the chairman of the US Joint Chiefs of Staff, met Friday at the Incirlik airbase in southern Turkey.

Ankara’s plan is for Turkish and US special forces, backed by commandoes and Syrian rebels, entering the country through the border town of Tel Abyad — currently held by the Kurdish YPG militia — and pushing to Raqqa, about 100 km (60 miles) south.

The US would have to convince the Kurdish militia to grant the Turkish-US-rebel force a 20-km (12-mile)-wide strip through YPG territory.

A second proposal is a push towards Raqqa via ISIS-held al-Bab in Aleppo Province, which Turkey and rebels have been attacking since early December. However, the roundabout journey of 180 km (110 miles) and mountainous terrain make that possibility less likely.

Washington has been backing the Kurdish-led Syrian Democratic Forces in the offensive against the Islamic State. However, the SDF has been held outside Raqqa for months, partly because of Turkey’s objections to a Kurdish occupation of the city.

The US has said that local Arab forces, rather than the YPG, will carry out the offensive. Ankara views the YPG as part of the Turkish Kurdish insurgency PKK, which has fought Turkish forces for decades.

Last week unnamed US officials said the Pentagon has prepared a proposal for American conventional troops to fight alongside the SDF for the first time.

But Turkish Prime Minister Binali Yildirim said on Saturday that there would be “serious issues” for ties with the US if Washington partnered with Kurdish militia: “We’ve told them one terrorist organisation can not be used to fight another. I believe the new U.S. administration will take these assessments into consideration.”

Yildirim said Turkish forces would not be directly involved in combat but would provide tactical support.