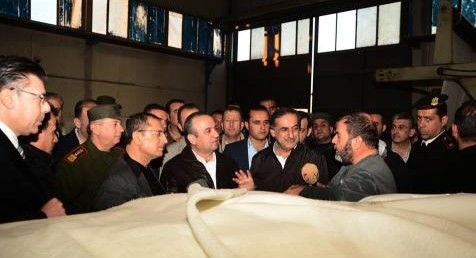 Writing for Politico, Barak Barfi turns the regime’s guided tour of an industrial area of Aleppo city into some telling observation about President Assad’s attempts to stay in power:

The industrial sector of Layramoun in northwest Aleppo tells the story of this war. Its 1,200 factories have been looted and destroyed. In their place are piles of concrete rubble filled with rusted metal. Collapsed water tanks peak through the ruins. Where bustling factories and the din of machines once churned out bundles of yarn, only the occasional explosion of distant artillery can be heard. In the weeks since I visited the besieged city in early November, the Syrian military along with its foreign backers and proxies have staged a massive offensive that is imminently close to retaking the eastern half of Aleppo held by rebels for more than four years. Relentless air strikes have driven some 20,000 civilians to flee the ravaged industrial city, Syria’s second largest.

“Sixty percent of the companies here were textiles, like sewing. But we also had companies which made plastic and steel moldings,” explained Ziyad Berri, an owner of a pharmaceutical company located in rebel territory.

Berri was one of a handful of industrialists and public figures who accompanied me and a dozen American and British journalists during our four-day trip inside a city that has dominated headlines for months but which few Western reporters have seen. What we saw, along with the devastation wrought by years of civil war, was evidence of how the Assad regime has maintained control over its most prosperous areas and why the rebels failed at capturing not only the city but the entire country. Though he waged an unpitying counterinsurgency campaign that has contributed to the deaths of 430,000, displaced half of his country’s population and leveled vast swaths of Syria’s major cities, President Bashar al-Assad managed to maintain the allegiance of a good portion of his citizens by offering them a thin veneer of normalcy.

For others, such as Aleppo’s industrialists, Assad bet smartly on the knowledge that most of their fortunes are tied to his survival and prosperity. Some of them made their money from their contacts with the all-powerful intelligence services that control the country and well-placed civil servants who can navigate the complex bureaucracy. Others were cognizant that a revolution is never kind to the wealthy. When the Ba’ath took power in 1963, it nationalized factories and banks and imposed land reforms that severely restricted private holdings. Overnight, fortunes extending back centuries were wiped out.

It was not only the businessmen’s wealth the rebels threatened, but their lifestyles as well. The Syrian rebellion in Aleppo was launched by the rural classes. They “came from Idlib and rural Aleppo,” parliamentarian Zayna Khawla told me, speaking in a contemptuous tone, as if the rebels were the Beverly Hillbillies descending on Rodeo Drive. “They are not like us,” industrialist Raf’at Shammeh explained. “Their values are different. We want to protect our country. They want to destroy it.”

“This is commercial terrorism,” our host Fares al-Shehabi noted. His position as Chairman of the Chamber of Industry gave him an aura of gravitas. But in Syria, where titles and positions mean nothing, it is proximity to the halls of power that matter. Shehabi’s real influence derives from his late uncle who was the military chief of staff for 24 years. Shehabi showed us sacks filled with a substance he claimed was yellow sulfur used to make mortars. It was impossible to tell. The Chinese produced sacks were labeled dicalcium phosphate and titanium dioxide, two non-flammable substances.

What was certain was that the narrative our government hosts spun us was only partially true. The rebels undoubtedly looted Layramun’s factories, stripping them of everything that could be moved to Turkey, where industrialists have been scooping up equipment at fire-sale prices. Indeed, during a 2012 visit to Aleppo’s most modern industrial complex, Sheikh Najjar, I saw rebels carting off heavy machinery.

But the rebels lack the artillery to pancake buildings. That is the work of the Syrian and Russian forces, who have only stepped up airstrikes since the beginning of the recent offensive. I stopped two of our military escorts, pointing to a building that had obviously been destroyed by airstrikes. I asked if government fighter jets had demolished it. One of the escorts studied the building’s collapsed floors and was about to nod his head before his comrade blurted out “gas canister bomb”, a projectile popular with the rebels. The pensive soldier abruptly froze and agreed. In Syria, there are no prizes for critical thinking or dissent.

Our Syrian hosts told us that the two dozen soldiers and another five or so plain clothes intelligence officers who accompanied us everywhere were necessary to protect us from the mortars rebels fire indiscriminately at civilian areas. But the Iranian and Russian journalists I saw close to the front lines did not merit the same VIP escort. Later, when I told one of my minders at the hotel that I wanted to go across the street to buy water at a kiosk, he demurred, urging me to return to my room. Minutes later, a hotel staffer brought me a frosty bottle. I was not sure whether to feel like a king in his castle or a prisoner in his dungeon.

Maintaining the “Normal” Amid Bombing and Russians

The medieval stalls of the Old City where Venetian traders established the first European consulate in 1548 have been reduced to charred stone. Minarets still stand, but their pockmarked bricks tell the story of the quarter’s suffering. “We only used light weapons because to use heavy ones here would destroy our national treasures,” Colonel Abd al-Majid told me. There’s little evidence of such restraint. Outside observers have blamed both sides for the destruction that has obliterated pre-modern travelers’ inns, religious seminaries and mausoleums.

Nearby lay the remains of the Carlton Hotel housed in a 19th century building. The rebels destroyed it in May 2014, tunneling several miles to plant underground explosives. An estimated 30 to 50 government forces were killed. The day before our visit to the Old City, Presbyterian Reverend Ibrahim Nseir told us how the rebels destroyed his church in 2012 using the same kind of munitions. Such tunnel bombs have proved to be one of the rebels’ most effective weapons in an asymmetrical war in which they face daily air bombardments.

As I came out of the Suq al-Zarb near the Citadel, I glimpsed a stocky man with light skin and ruddy cheeks leaving a battlefront area escorted by six Syrian soldiers. His gold necklace hinted that he was a foreigner. When one of our hosts told his retinue, “Get him out of here!” I understood he was a Russian. Another Russian in our group caught up with him, learning that he was from a base in the province of Samara on the Volga river. The soldier was likely from the city of Tolyatti which houses the 3rd Guards Special Forces Brigade, a contingent that has fought in Chechnya and Ukraine and is counted among Russia’s elite forces. Moscow has repeatedly denied that its ground forces are fighting the rebels and instead argued that they are only battling the Islamic State in Iraq and Syria (ISIS). But the soldier’s presence in Aleppo confirmed that Russia is willing to exhaust all its resources to prop up Assad.

An eclectic group of foreigners are certainly keeping Assad in power even as he remonstrates against the foreign jihadists destroying his country. But Assad refuses to acknowledge the contribution they have made to keep him in power.

When I met with Assad days earlier, he posited, “Let’s suppose that these allegations are correct, and this president was killing his own people and committed crimes…after five years and a half, who supported me?” From my brief visit to Aleppo, it was clear that it was not Syria’s silent majority. On the journey to the city, I saw a Hezbollah funeral procession outside Homs. In Aleppo, Kurdish fighters from the People’s Protection Units held positions in Bani Zayd, a neighborhood which houses no Kurds. Iranian backed Shi’i militias actively post their exploits on social media. And though the skies were quiet during my visit, Russian fighter jets have been pummeling rebel held areas of east Aleppo for months. Assad is winning this war because his backers have zealously embraced the use of overwhelming force while his adversaries, and their supporters, have not.

But it is Assad’s people who are losing the war. Nearly 11 million Syrians have either fled the country or are internally displaced according to the United Nations. With a pre-war population of 21 million, that means about half have left their homes. In February, the Syrian Centre for Policy Research estimated that 11.5 percent of the population had been killed or injured through 2015.

The government has survived a failed revolution because it provides what the rebels can never do — a consistent wage and the promise of a modicum of governance. The regime deftly understood early on that it was necessary to preserve the façade of normalcy. The fate of Libyan leader Mu’amar al-Qadhafi provides a stark contrast. After Qadhafi lost the eastern half of his country in a matter of weeks in 2011, he severed rebel held areas from regime-held territory. He cut off the mobile telephone networks. He ceased providing government services there. Qadhafi was under attack and he ensured that all Libyans knew this.

But Assad drew from a different playbook. He continued paying government salaries to civil servants in rebel territory. Utilities such as electricity and water were only cut off in the most besieged of territories. And the government tried its hardest to make residents forget a war was raging outside their cities. Assad has certainly starved out his enemies (food shortages have been a way of life in places like Aleppo for years and shipments of emergency rations have even been intercepted in rebel enclaves such as Daraya outside of Damascus) in ways reminiscent of World War II. But Assad has justified it to his supporters and fence sitters as a necessary move to stomp out the foreign jihadists threatening their existence. While his critics in the West scoff at such claims they resonate among a population that looks around the Middle East and only sees chaos when governments are toppled in the name of freedom and democracy.

This explains why even some of the poorest, most beleaguered Syrians have not forsaken their leader and instead rail at the rebels, who claim to want to liberate them from a despot. At the Hafiz al-Assad mosque, internally displaced persons (IDPs) from rebel held east Aleppo were eager to tell us how wicked the fighters there are. “Bashar pays our monthly wages and utilities,” 72-year-old Salah Yassin said, struggling to enunciate words between his missing teeth. “The terrorists took our money and didn’t give us any food.”