Syria Analysis: Aleppo Was Not an “Evacuation” — It Was a Crime of Forced Displacement 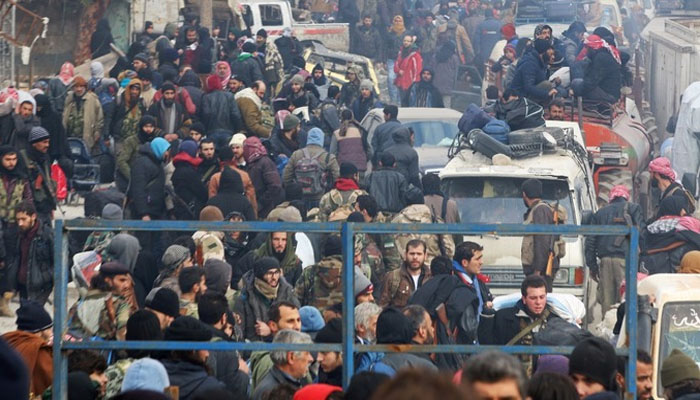 PHOTO: People wait in the staging area for removal from eastern Aleppo city

Last Thursday, as forces loyal to the Syrian government advanced through eastern Aleppo and despondent civilians there wondered whether they would be massacred, Syria’s President Bashar al-Assad stood in a sunlit courtyard in Damascus, dressed in a crisp blue suit, and compared his victory to the births of Jesus Christ and the Prophet Muhammad. Just as our calendars count the years before and after those events, he explained, “I believe that we will talk about history—and not just the history of Syria but of the entire world—as before and after the liberation of Aleppo.” He rocked back and forth on his heels, waving his arms and raising his eyebrows, unable to conceal his excitement.

So, characteristically, an autocrat inflates his place in history. But, in this case, it’s worth acknowledging that Assad has a point: the significance of Aleppo’s collapse is far greater than its physical territory, its ancient history, and its former splendor. For more than four years, Western governments and the United Nations stood by, watching, as Assad and his backers ostentatiously ignored the laws of war, and residents of eastern Aleppo live-streamed their own extermination. Now, along with tens of thousands of civilians, the credibility of the powerful countries and institutions that could have helped them, but didn’t, lies in Aleppo’s rubble and blood.

Consider Abdulkafi al=Hamdo, a Syrian teacher and activist, who had taken Western politicians at their word and believed that documenting human-rights abuses mattered to the international community. He stayed in Aleppo under bombardment and siege, and broadcast his thoughts on Twitter, because he thought that if the world witnessed civilians suffering in Aleppo, it would come to their aid. Last Tuesday, al-Hamdo filmed what he expected to be his final message, a warning to activists living in other repressive parts of the world. “Don’t believe anymore in the United Nations,” he said. “Don’t believe anymore in the international community. Don’t think they are not satisfied with what’s going on.” He sighed, and checked his surroundings. Pro-Assad militias were closing in. “This world does not like freedom, it seems. Don’t believe that you are free people in your countries anymore. No.” There was the sound of gunfire in the background. “I hope you can remember us.”

In addition to banned munitions, Syrian and Russian aircraft spent the past few months dropping leaflets over eastern Aleppo, warning that anyone who didn’t leave the area would be “annihilated.” But there was nowhere to go, except into government-held districts, where many residents feared that they would be detained, tortured, and killed. The leaflets continued to rain down on them. “You know that everyone has given up on you,” the leaflets said. “They left you alone to face your doom.”

Calling A Crime By Its NameSee Syria Analysis: How Assad Regime and Supporters Spread the “14 Foreign Spies in Aleppo” Deception
Syria Analysis: The Deception of a Pro-Assad Activist at the UN

As I have previously written, the volume and quality of court-ready evidence against high-level officials in the Syrian government is greater than has ever previously been collected in an active conflict. Still, the International Criminal Court has no jurisdiction over Syria, because Russia, voting no alongside China, obstructed the conflict’s referral at the U.N. Security Council, in 2014. A single country’s veto power shields all of Syria’s war criminals from justice — not just Assad and his deputies but also various rebels, including members of Al Qa’eda and the Islamic State. The credibility of worthy institutions is at stake when they are totally incapable of adhering to their founding principles. Under the present system, to some war criminals with powerful allies, the laws of war, drafted during the bloodiest century in human history, can be brushed aside as little more than a suggestion, to be ignored, shamelessly, with impunity.

International criminal law takes into account the fact that the highest-level perpetrators are rarely present at the scene of the crime. For this reason, one of its modes of liability, known as “command responsibility,” is an assessment of whether the individual on trial knew or should have known that his subordinates were committing war crimes, and, in turn, whether he failed to prevent or punish those crimes. That will be one measure of Assad’s guilt, should he ever be brought to court. Our collective shame, having watched this horror unfold, is another matter still.