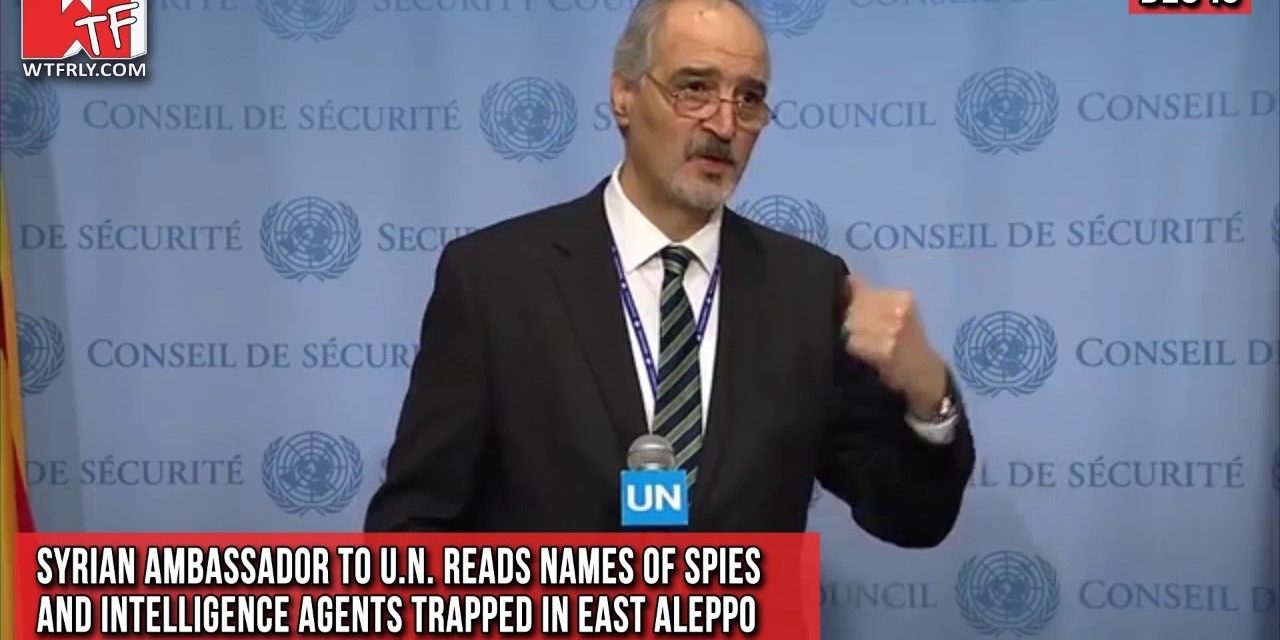 This is another pilot article for our forthcoming section Syria Oracle, documenting and dissecting the propaganda and disinformation in the Syrian conflict, including that by the Assad regime, States such as Russia, and activists and even journalists.

UPDATE, DEC 27: A pro-Assad conspiracy and disinformation site, Syrian Perspective, is trying to explain the collapse of the “14 foreign spies” story: “It horrifies me to tell you that the foreign spies who were holed up in Aleppo were allowed to leave with the other terrorist evacuees. This was a deal struck by the Russians and Iranians in in spite of the [Syrian Arab Army’s] objections.”

The Assad regime’s Ambassador to the UN, Bashar al-Ja’afari, is not known for sober truth-telling. For example, this summer he declared that it was France — rather than the regime — which carried out the chemical attacks near Damascus in August 2013 that killed at least 1,400 people.

But even by his standards, his press conference on Tuesday was ambitious in its claim — Ja’afari said the Assad regime had the identities of 14 foreign spies inside opposition-held eastern Aleppo city.

The Syrian…authorities have gathered information that many foreign officers, intelligence and military officers, who are in the eastern part of Aleppo with the terrorist groups are trying to exit their strongholds. (from 9:20 mark)

He helpfully provided the names and nationalities:

Ja’afari did not offer a shred of evidence for his dramatic assertion — because there is none. Still, he and the Assad regime have the disinformation advantage of declaring something which cannot be disproved, since it never happened. As US Defense Secretary Donald Rumsfeld once justified American disinformation over its invasion of Iraq in 2003, “Absence of evidence is not evidence of absence.”

So while the Ambassador’s performance will help illuminate the network — the Russian State and Assad regime outlets, eagerly joined by pro-Assad conspiracy sites and activists — the significance lies in the political game around his spy story.

Throughout the Russian-regime siege, bombing, and pro-Assad ground assault on eastern Aleppo city, the Assad regime and its allies have pushed the line of American intelligence operatives in and near the opposition districts. In September, soon after Russian airstrikes helped reimpose the siege, Russia’s Sputnik International declared that “30 Israeli and western officers” were killed in a Russian strike on “a foreign officers’ coordination operations room”.

The Russian outlet SouthFront summarized in one of its slickly-produced films on December 6, “The US Seeks to Free Its Officers from the Death Trap in Aleppo City”. It promised, “The Syrian-Russian-Iranian alliance will be in possession of rock solid evidence of US special operations directly supporting terrorists in Syria.”

The motive for the allegations was straightforward. Russia, Iran, and the Assad regime, to maintain space for the ongoing military operations to break resistance in east Aleppo, were maintaining pressure on the US not to challenge the aerial and ground attacksOn December 5, the day before the SouthFront video, Russia vetoed a UN Security Council resolution for a ceasefire.

However, by last week the scenario in Aleppo had shifted. The capitulation of the opposition and rebels in Aleppo was assured, with maneuvering over a deal for removals of people from the city. But the Assad regime was unhappy that it could not trap and effectively eliminate the rebels. Alongside Iran, it tried to undermine the deal with attacks by Iranian-led and pro-Assad militias on the convoys and opposition districts. Twice the attacks suspended the removals, but twice Turkish President Recep Tayyip Erdoğan and Russian counterpart Vladimir Putin ensured that the process was renewed.

Then the regime suddenly faced a new challenge. The UN Security Council scheduled a meeting on December 16 to consider a French-drafted text for international monitors in Aleppo city and elsewhere in Syria. The immediate threat seemed to have been averted by Russian opposition: facing Moscow’s veto, the Council postponed the session.

But Russia, maneuvering between the regime and its new cooperation with Turkey, decided to negotiate with the French. A compromise text was agreed, presented to the Council, and passed unanimously on Monday.

Now Ja’afari had to respond to the unexpected setback. He had to find a way to block the introduction of the monitors into Aleppo and, beyond this, to regain the propaganda ground lost in Russia’s shift of position.

On December 15, as the French resolution for international monitors was scheduled for Council discussion, Fares Shehabi — part of a family in the Assad inner circle for decades, an MP and head of the Aleppo Chamber of Commerce, and a hard-working propagandist on social media — posted on Facebook the list of 14 captured intelligence officers in the “NATO bunker” in eastern Aleppo city.

Shehabi’s original post has apparently disappeared; however, the anti-imperialist conspiracy site Voltairenet was quick to spread the allegation. It also linked to a Facebook post by a Said Hilal Alcharifi on December 15:

The Syrian authorities were able, thanks to information thorough, arrive at the headquarters of senior officers and western regional in the basement of a district of Aleppo-is, and capture them all alive.

A few names have already been ex filtered to Syrian journalists including me.

Seen the nationalities (US, French, British, German, Israelis, Turks, Saudis, Moroccans, Qatari, etc.. etc) of these scumbags and their military ranks, I assure you.

Syria holds in this moment a big treasures to carry out the negotiations with the countries that have destroyed.

Other pro-Assad conspiracy outlets joined the promotion. 21st-Century Wire — the outlet of Vanessa Beeley and her propaganda campaign against the White Helmets civil defense organization and the platform for a Shehabi podcast on December 11 — recycled the Voltairenet article. So did the grandly-named The International Reporter. The US outlet Veterans Today, known for claims such as an Israeli nuclear strike near Damascus, added its own “update”:

We have some confirmation on this from our own Syrian sources. The numbers are much higher than just the 14 names released by the Syrian MP via Facebook…

Unsurprisingly, there is no evidence of an Aleppo-based foreign spy such as a “David Scott Winner” or a “David Shlomo Aram”. And of course, the Assad supporters are saying that is because the operatives were using false names. (That raises the question of how regime officials could be certain of their nationalities, but we will leave that quibble for the moment.)

The claim also makes no sense in the context of the current Turkish, US, and Israeli policy towards Aleppo and the Syrian rebellion. The Americans long ago distanced themselves from support of any rebel operations aimed at the Assad regime, instead devoting special forces and covert operations to the Kurdish-led offensive against the Islamic State. Israel has never given covert or military support to the rebels, and its unilateral operations such as airstrikes have been devoted to southern Syria not the northwest. Turkey apparently struck a deal with Russia this summer, accepting the pro-Assad reoccupation of all of Aleppo city in return for Russian acquiescence to Turkey’s military intervention alongside rebels in Aleppo Province.

In theory, it is possible that foreign intelligence services would want people on the ground to monitor the situation — although even this is problematic, given the high risk of being trapped in the opposition districts. But this is a far cry from what the Assad regime and its activist supporters are alleging.

Instead, Ja’afari’s declaration was part of the propaganda strategy that rebels were trying to smuggle “terrorists” and the “foreign officers” out of Aleppo, aboard the convoys removing civilians from the city. This had been part of the Assad regime’s attempt to cover up the attacks by Iranian-led and pro-Assad militias on the convoys and opposition districts. It hoped to keep rebels bottled up in eastern Aleppo, rather than letting them move to opposition-controlled territory.

But that strategy had been overtaken by the Russian-French resolution for the monitors. So Ja’afari added to his script with the spy story, part in frustration, part in hope that the move can still be blocked from implementation.

[The foreign officers] are why you saw this hysterical movement at the Council for the last three days. The main purpose is how to rescue these terrorist foreigners, intelligence officers, from the same countries who pushed for the adoption of the resolution.

Losing the Battle, Winning the War

Ja’afari’s effort may appear futile, even ludicrous. In contrast to its eager dissemination of the “foreign spy” story on December 16 — while Moscow was still objecting to the resolution of international monitors — Russian outlets were near-silent on Ja’afari’s statement. Only Sputnik carried a brief item, and it did not post the list of the 14 foreign officers.

Instead, the Ambassador’s statement was overtaken by the breaking news of the assassination of the Russian Ambassador in Turkey and Russia’s priority: its meeting the following day with the Iranian and Turkish Foreign and Defense Ministers to consider the next steps in the Syrian crisis

Still, like much of regime disinformation, Ja’afari’s performance may have a longer-term pay-ff. Even if his allegation has no substance, it now enters the atmosphere of pro-Assad activists and sites as “truth”: the further confirmation that the core of the Syrian conflict was the US-Israeli-Turkish-Saudi-Gulf conspiracy to overthrow the Assad regime. That “truth” continues to play its leading role in obscuring the origins of the conflict. It continues to absolve the regime of its primary responsibility for the deaths and destruction.

And if the Assad regime is successful, despite possible Russian doubts, about taking the war on civilians as well as rebels to the next step of Idlib Province in the northwest, there is little doubt that this “truth” — complete with its “foreign spies” — will be invoked as justification.