Syria Interview: Assad — We Are Not Attacking Civilians in Aleppo 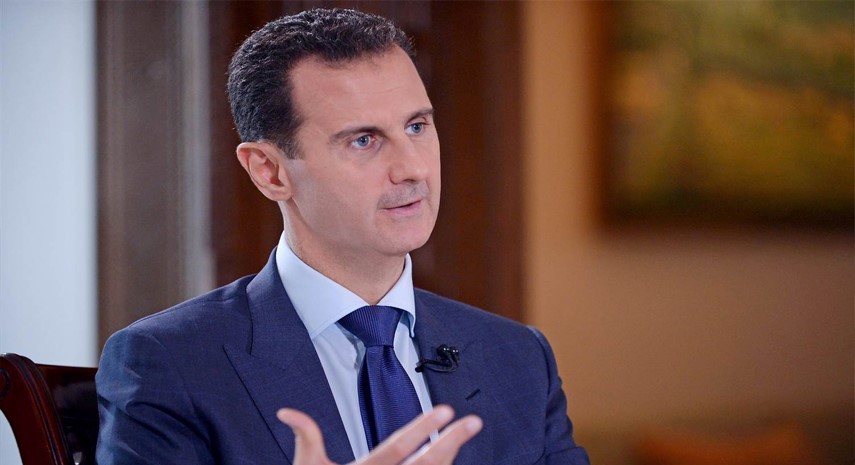 President Assad has used an interview with Danish television to deny any attacks on civilians in opposition areas of Syria’s largest city Aleppo.

Despite the deaths of more than 500 people from Russian-regime bombing in the last two weeks, Assad insists that the photographs, videos, and testimonies of the mass killing are fake. He also said the Russian-regime assault on vital facilities, including hospitals, never occurred.

While mainstream media are focusing on Assad’s call on rebels to disarm and leave the city, the interview is dominated by the President’s repeated complaint about “the propaganda and demonization of the government in Syria”.

Assad also denied any siege of opposition districts, even through pro-Assad forces, enabled by intense Russian airstrikes, cut off the area in late August. Russia and the regime then prevented any aid reaching eastern Aleppo by bombing a UN convoy, shortly after the end of a short-lived ceasefire on September 19.

So, Mr. President, let us begin with the current situation in Aleppo. The last few weeks, terrifying pictures have come out from Aleppo. I mean, we see the residents of the rebel-held eastern part of Aleppo in a very dire situation. They seem exhausted, they seem terrified, the situation is very violent. What is the strategy behind launching such fierce attack from the Syrian and Russian armies at the moment?

Actually, we didn’t launch an attack, because the Syrian Army has continued its drive toward liberating every part of Syria including Aleppo or eastern Aleppo from the terrorists, but there was a ceasefire for one week in order to give the treaty, or the agreement, let’s say, between the Russians and the Americans a way to be implemented, and it didn’t work. When that week ended, we continued our drive as army to liberate eastern Aleppo from the terrorists.

But actually, when you want to talk about the dire situation in eastern Aleppo, it’s not because of the government; it’s because of the terrorists. They’ve been in that area for years now, but we only heard about that “dire situation” in the media recently, in the Western media, because the situation of the terrorists is very bad. This is the only reason. While if you want to talk about the situation there, we never prevented any medical supply or food supply or any other thing from entering east Aleppo. There’s no embargo, if that’s what you mean, there’s no embargo, and our role as a government is to encircle the terrorists in order to liberate every part of the city.

Let me tell you something about those pictures of children; of course, in every war, there are victims, there are innocent victims, and that’s why every war is a bad war, but if you look at those pictures that they’ve been promoted as pictures in the Western media, they only singled out a few pictures of children that suit their political agenda, just to accuse the Syrian government, while – you’ve been here now for two days – and they’ve been daily shelling from the eastern part of Aleppo toward the rest of the city, and there was wholesale killing and destruction of the other part of the city and tens of victims and tens of wounded people from Aleppo that the Western corporations didn’t talk about them. The Western officials didn’t issue a single statement regarding those children and women and elderly and innocents in general.

So this is part of the propaganda and demonization of the government in Syria. That doesn’t mean when you have war, again, that you don’t have victims, but the Syrian government has opened the door for the militants in the eastern part of Aleppo to leave safely with guarantees, and for the people of that area to go back to their houses.

I don’t have the answer to which hospital are you talking about, because we don’t have any facts about it, we only have allegations, so answering allegations shouldn’t be only through…

But pictures are facts.

President Assad: Pictures cannot tell you the story, even videos, everything could be manipulated these days. I wouldn’t say that there are no such attacks on any building, but as a government, we don’t have a policy to destroy hospitals or schools or any such facility for a simple reason: first of all, morally, the second reason is that if we do so, we are offering the militants the incubator, the social incubator that they’ve been looking for, it’s going to be a gift, something we wouldn’t do because it’s against our interests. It’s like shooting ourselves in the foot. If there’s such an attack from the army, it could be by mistake, but we don’t have any information that thing has happened. All what we have is allegations and only in the Western media, not from Syria.

So, if the Syrian Army didn’t attack hospitals, or maybe they did by mistake, you say, are you sure it’s not the Russian air force who are targeting hospitals?

The question that you should ask when you have a crime: who is the beneficiary of that crime? What would they get, I mean for the Russians or the Syrians, if they attack a school or if they attack hospital? What would they get if they attack a hospital? Nothing, they wouldn’t get anything. I mean, even if you want to talk about the terrorists, most of their hospitals for the militants would be in the basement in ordinary buildings. So, attacking a hospital intentionally by the army is based on shaky logic, let’s say.

Do you then agree that whoever attacks hospitals, they are guilty of war crimes?

Of course, by international law, it is. I mean, hospitals have immunity. Any other facility for any inhabited area – inhabited by civilians, not by militants – has immunity, and any government shouldn’t do it, of course, I agree with you.

Of course, I have children, I have the same feelings of any father and mother who would care a lot about their children, and how would they feel if they lose a member of their family. And by the way, we lost members of our families during the conflict because of the terrorist attacks. But when you look at those killed children, you think why? Why the terrorists did so? Why did Qatar and Saudi Arabia and Turkey commit those crimes? And I wonder why would the Western countries, mainly the USA and its allies in Europe, have supported those terrorists who’ve been committing crimes in Syria? That’s the first thing I thought about. Of course, as President, the second thing that I would think about is how can I protect the Syrian people and the Syrian children, and how can I protect the innocent from having the same fate in any coming day.

So you are blaming the rebels in the eastern part of Aleppo of being behind the attacks on the children of Aleppo?

President Assad: You can take your camera to Aleppo, to the other part of Aleppo which is under the control of the government, which is – I mean, when you see the fact, it’s more credible than what I’m going to say – but you can see how many civilians have been killed during the last two months in Aleppo. Hundreds of civilians have been killed by the rebels. The question is why didn’t we hear about them in the Western media? That’s my question. Again, I wouldn’t say that you don’t have civilians going as victims, but when it’s shelled by mortars by the rebels intentionally, we have to talk about this crime as well.

At the moment, there’s a seven-year-old girl, her name is Bana al-Abed, from Aleppo. She’s Tweeting about her life in the eastern part of Aleppo. She’s talking about the massive bombardment. She’s very scared, every time she wakes up and realizes, fortunately, she’s still alive. Do you trust her as an eyewitness?

You cannot build your political position or stand, let’s say, according to a video promoted by the terrorists or their supporters. It’s a game now, a game of propaganda, it’s a game of media. You can see anything, and you can be sympathetic with every picture and every video you see. But our mission as a government is to deal with the reality. You have terrorists in Syria, they are supported by foreign powers and foreign countries, and we have to defend our country. In some areas, the terrorists use the civilians as a human shield, but we have to do our job to liberate them, we cannot say “we won’t do anything because the terrorists are holding those hostages.” It’s our mission. Again, we are going to the same point; you always have mistakes that are committed by anyone, but this is not policy, and you always have innocent victims of that war.

What kind of mistakes did the Syrian Army do?

Have you any examples of mistakes?

President Assad: I mean, you have institutions, I mean anyone could be punished if he commits a mistake, that would happen in any war, in every army, this is common sense.

You have encouraged the civilians in the eastern part of Aleppo, and also actually the rebels, to leave the place. You wanted to create a humanitarian corridor. Can you guarantee the safety of those civilians and the rebels if they leave the rebel-held part of the city?

Exactly, that’s what we announced a few days ago, and we announced it two months ago, because we wanted the civilians to leave away from the terrorists. Yeah.