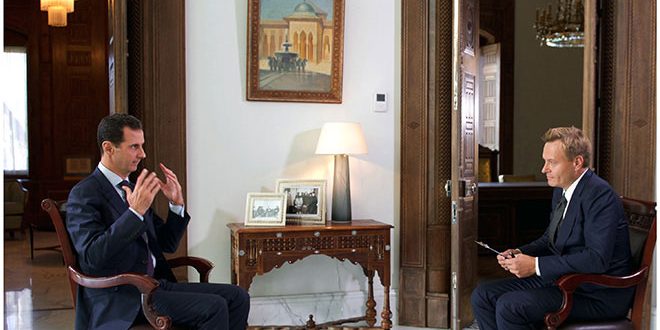 These Are The White Helmets
Lifting Sidewalks to Find Salt in Besieged Madaya
Syria Interview: Assad — We Are Not Attacking Civilians in Aleppo

UPDATE 1720 GMT: The US and European powers have stepped up diplomatic pressure on Russia to halt the bombing of Aleppo.

The UN Security Council is expected to vote on Saturday on a resolution, drafted by France and Spain, that calls for an immediate truce, a no-fly zone, and access for humanitarian aid.

Kerry, who has distanced himself from a three-year process of cooperation with Russia over a political resolution, added:

Last night the regime attacked yet another hospital and 20 people were killed and 100 people were wounded. Russia, and the regime, owe the world more than an explanation about why they keep hitting hospitals and medical facilities and children and women.

These are acts that beg for an appropriate investigation of war crimes and those who commit these would and should be held accountable for these actions.

German Chancellor Angela Merkel also urged Moscow to act, saying that there is no basis in international law for bombing hospitals and civilians: “Russia has a lot of influence on Assad. We must end these atrocious crimes.”

But Russia indicated that it will block any attempt through the Security Council to halt the bombing. Deputy Foreign Minister Gennady Gatilov said the draft resolution had a number of unacceptable points and politicized humanitarian aid.

ORIGINAL ENTRY: President Assad has said that rebels who give up their weapons can safely leave Syria’s largest city Aleppo, besieged and bombed by Russia and regime forces.

Assad said on Thursday that the fighters can safely leave with their families, escaping the Russian-regime bombardment which has killed more than 500 people in the past two weeks.

He maintained to Danish television that he would “continue the fight with the rebels until they leave Aleppo. They have to. There’s no other option.”

“It’s impossible for the rebel groups to leave Aleppo because this would be a trick by the regime,” Zakaria Malahifji, said an official of the Fastaqim faction. “Aleppo is not like other areas, it’s not possible for them to surrender.”

The US was also skeptical. “For them to suggest that somehow they’re now looking out for the interests of civilians is outrageous,” White House spokesman Josh Earnest said.

On Wednesday, the Syrian military said it had reduced shelling and airstrikes so people to leave, but it soon added the warning: “All those who do not take advantage of the provided opportunity to lay down their arms or to leave will face their inevitable fate.”

The regime sent text messages to the mobile phones of some of the more than 250,000 residents, telling them to repudiate rebels: “Our people in Aleppo: save your lives by rejecting the terrorists and isolating them from you” and “Our dear people in the eastern districts of Aleppo! Come out to meet your brothers and sisters.”

Ibrahim Abu al-Laith, a civil defence official, said “The bombardment decreased a lot in the eastern districts, but there’s a sense of foreboding ….People are still scared. And because there’s still the siege, there’s nothing at all in the shops.”

Despite the siege and airstrikes, a resident named Amir said he did not see how civilians can leave: “It’s not true that there are safe crossings.”

De Mistura declared that there are “about 900 former” fighters of Jabhat Fatah al-Sham, formerly known as Jabhat al-Nusra, among 275,000 residents, 100,000 of them children.

Both Damascus and Moscow portray the situation in east Aleppo as one where the jihadists of Jabhat Fatah al-Sham, formerly Jabhat al-Nusra, control the neighborhoods. Russia has long demanded the “separation” of rebels from JFS?Nusra as a precondition for advance towards political resolution.

De Mistura addressed the former JFS/Nusra personnel: “If you did decide to leave, in dignity with your weapons, to Idlib or anywhere you wanted to go, I personally am ready, physically ready, to accompany you. I can’t guarantee more than my own personality and body.”

We are determined to break the siege…in concerting our efforts along with our brothers….We have pledged to be killed as the noblest fighters rather than to surrender and being humiliated.

The opposition’s interim government broke contact with de Mistura and called on him to step dow:

We demand the resignation of the UN’s envoy…and we declare that we have stopped all forms of communication and cooperation with him and his staff.

Instead of condemning the aggression [against Aleppo], he sided with the story of the [regime] in Damascus and the Russian occupier…[which] gave them justification to continue their aggression.

Syrian TV Focuses on Casualties in West Aleppo — But Were Some From Regime Fire?

Syrian TV continues to ignore the civilian deaths in east Aleppo while playing up claims of casualties from rebel shelling of the regime-held west of the city — this report from al-Akhbariya says eight were killed and dozens wounded in the Jamiliyeh district:

However, the victims may have been hit by regime fire. One of the munitions was a BM-30 rocket used by the Syrian military:

And, in another incident, a misfired “Uragan” 9M27K rocket embedded itself in the floor of a building.

Fighting has broken out between the leading rebel faction Ahrar al-Sham and the jihadists of Jund al-Aqsa, who have been prominent in the offensive against regime lines in northern Hama Province.

The clashes began earlier this week when Jund al-Aqsa kidnapped an Ahrar al-Sham fighter and and shot his wife and brother in Saraqeb in Idlib Province.

Graphic video is also circulating of Ahrar al-Sham members killed by the jihadists.

Ahrar al-Sham said an investigation found a Jund al-Aqsa cell linked to the Islamic State’s center in Raqqa in northern Syria. It claimed that, after initially denying the attack, Jund al-Aqsa acknowledged the abduction of the fighter.

However, on Thursday night the jihadists threatened to end their involvement in the northern Hama offensive, crippling an advance that has taken a series of town and villages across a wide front since late August and closed within 10 km (6 miles) of Hama city.

Ahrar al-Sham has now given Jund al-Aqsa 24 hours to release the fighter and other detainees. It has been supported by Syria’s largest rebel factions, who issued a statement on Friday saying they will “renounce” the “unjust” Jund al-Aqsa until it complies with a process for “legitimacy”.

A local source asserted, “Jund al-Aqsa is the ‘new’ Islamic State. Finally rebels get it and are acting accordingly.”

A White Helmets rescuer, Mahmoud al-Muhammad, has been killed while responding to the regime bombing of worshipers leaving Friday prayers in Daraa Province in southern Syria.

A center of the organization, which has rescued more than 60,000 people since 2013, was targeted in Hama Province.

See also These Are The White Helmets

The latest attacks on the rescuers came as the Nobel Peace Prize, for which they were nominated, was announced in Oslo, Norway.

At the time of the @NobelPrize announcement, @SyriaCivilDef center targeted in Hama. Back to work. pic.twitter.com/DsOE0WRbs3

Aftermath of a pro-Assad bombing of Talbiseh in northern Homs Province on Friday:

Russia to US: Intervene and We Might Shoot Down Your Planes

Russia’s Defense Ministry has warned that it may shoot down US warplanes if Washington intervenes against the Assad regime.

Spokesman Igor Konashenkov said on Thursday, “I would recommend our colleagues in Washington to thoroughly consider the possible consequences of the realization of such plans.”

He then said that Russia had deployed advanced S-300 and S-400 anti-aircraft missiles at its bases in Syria and that their range “can be a surprise for any unidentified flying objects”.

Earlier this week, Russia said that another S-300 battery had been deployed at its naval base in Tartous in western Syria. The announcement followed leaks by US officials to American media about consideration of plans for “limited military strikes”, responding to the Russian-regime bombing of Aleppo.

Konashenkov told “American strategists” not to assume a covert intervention would go unanswered: “The illusions of dilettantes about the existence of ‘stealth’ aircraft may encounter a disappointing reality.”