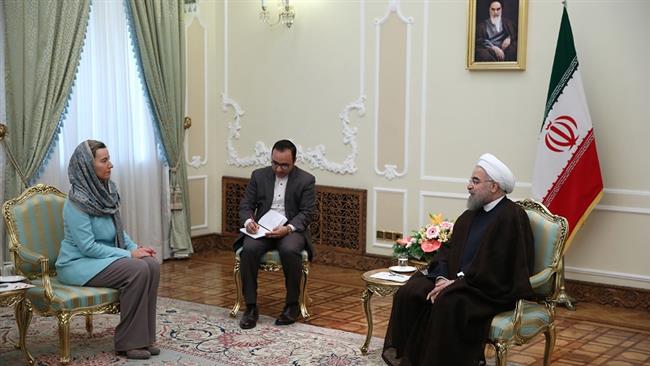 No details were given of the discussions, with Rouhani reiterating the official Iranian line, “All should know that the Syrian issue has no military solution and must be resolved through diplomatic means.”

He continued, “In this regard, the EU’s increased activity to create security and peace in Syria with the cooperation of regional countries will be effective.”

Rouhani said the EU should use its “political influence” to put pressure on the regional sponsors of “terrorist groups” to block financial support. Otherwise, he warned, “terrorist governments” would be established in the Middle East and North Africa if the groups were “not seriously confronted”.

Iranian media simply said that Mogherini “underlined the need for cooperation between Tehran and the EU in the settlement of regional conflicts, including in Syria, saying that diplomacy can help solve such crises”.

The meeting followed Foreign Minister Zarif’s trip to Moscow on Friday for talks with Russian counterpart Sergei Lavrov, and then a three-way conversation with Syrian Foreign Minister Walid al-Moallem.

The trip took place amid increasing political pressure on Russia and the Assad regime to halt the siege and bombing of opposition areas of Aleppo. The three men offered no response to Friday’s development of a rebel offensive challenging foreign forces — including Iranian units and Iranian-led militias — and the Syrian Army in the west of the city.

Hengameh Shahidi, a former reformist journalist and political prisoner, has been fired from her teaching position at an Iranian university following threats of violence from a hardline conservative group and pressure from the Revolutionary Guards.

Shahidi taught international law at the Varamin-Pishva Islamic Open University, south of Tehran. She was summoned after teaching only two classes on the first day of the autumn term on October 10 “because the [hardline group] Delvapasan had threatened to attack the university in shrouds”, according to a source close to the case.

The Delvapasan (“Worried Ones”) says it is concerned aobut the erosion of revolutionary principles in the Islamic Republic, and has tried to remove reformists — many of whom were imprisoned after Iran’s disputed June 2009 Presidential election — from public life.

Accoring to the source, Shahidi was told by the head of the university, Hossein Ali Sheibani, that the Revolutionary Guards had asked that she stop teaching at the university. He added the threats from Delvapasan, with some students even saying that the group had threatened to throw acid”.

In 2009 Shahidi was a reporter for the reformist Nowruz newspaper and an adviser to Presidential candidate Mehdi Karroubi, one of the presidential candidates who disputed the accuracy of the vote count that year. She was arrested on June 30 and eventually sentenced to six years in prison for “propagating against the regime”, “acting against national security”, and “insulting the President”. She was freed in June 2012 after being granted conditional release on medical grounds.

The head of Iran’s Civil Defense Organization has claimed that Iranian-American oil executive Siamak Namazi, sentenced to 10 years in prison earlier this month, hacked the smartphones of regime officials.

Brigadier General Gholam Reza Jalali declared that Namazi had interfered in Iranian elections, “He has conducted sabotage acts by using intelligence data against the election analyses and therefore, a decision has been made so that certain officials and managers would not be allowed to use smartphones.”

Jalali called on the Government to impose conditions on foreign cellphone companies, including Apple and Samsung, for use of their data servers inside Iran.

Namazi was detained by the Islamic Revolutionary Guards Corps in October 2015 as he visited relatives in Iran. Four months later, the IRGC arrested his 80-year-old father Baqer, a Canadian-Iranian national who is a former UNESCO official and Iranian provincial governor.

A day after a “documentary” on Iranian State TV featured arrest footage of Siamak Namazi, both he and his father were given the 10-year prison terms.