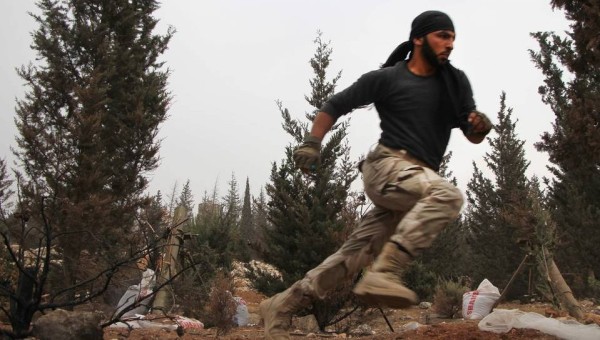 Syria Analysis: Lessons from Russia’s Intervention — But Will Anyone Learn Them?

Details of placement of regime forces across Aleppo frontlines: pic.twitter.com/nxiYVrjjFB

Following a vehicle bomb attack (see below), rebels took several positions. Their strategic objective is likely to be the air defense base, which is on a hilltop overlooking al-Zahraa and the New Aleppo neighborhood.

[1630 GMT: Both well-placed observers and pro-Assad activists say that foreign militias and the Syrian military have now regained the Family House Amusement Park in al-Zahraa.

A pro-opposition activist said the rebels retreated “after the regime blew up several buildings which were targeted for capture. Thus the area became open for regime fire.”]

UPDATE 1115 GMT: Reports are circulating of two more vehicle bombs this morning. The first was in the al-Zahraa district:

Rebel commanders are saying that they hope to move through the 3000 Housing Complex and military positions — possibly the Assad academy — to break the Russian-regime siege.

Map of the area: 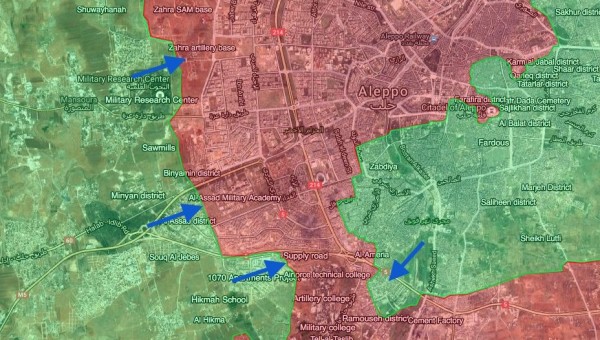 The activists say that rebels have repelled the attacks.

The past hour regime and allied Shia militias have been attempting to advance to Dahiyat Al-Assad. So far everything is going well.

Drone footage of a pro-Assad airstrike or barrel-bombing of the area:

drone footage of al-Assad suburb this morning capture what looks like an airstrike or a barrel bomb attackhttps://t.co/VRjzPiF7ad pic.twitter.com/2KIYcTiDNg

Attacks began at dawn southwest of Aleppo, an area which has been fiercely contested since the spring and where Russia and the Assad regime re-imposed a siege of the city in late August.

The rebels quickly took most of the district of Dahiyat al-Assad, which they had never held even at the height of gains this spring and summer. By evening, they had secured almost all of the 1070 Housing Complex, most of which they occupied despite the pro-Assad advances this autumn. And they had moved for the first time into part of the neighboring 3000 Housing area.

The rebel objective may be to capture the Assad Academy, a facility for basic educational and training institution for infantry and armored corps conscripts and for advanced training for Army engineers.

The attacks included at least six vehicle-borne bombs, one of which was remote-controlled. Photographs showed large explosions in Hamdaniyah, where the 3000 Housing area is located.

Hundreds of rockets were also fired on regime facilities and bases, notably the Nayrab airbase southeast of Aleppo.

Rebels were assisted by cloud cover which prevented any resumption of Russian airstrikes. The Kremlin maintained that President Vladimir Putin had ruled out immediate strikes because he “believes it is possible to extend the humanitarian pause” which Russia declared on October 18, as it faced growing political pressure over the siege and bombing of civilian areas in eastern Aleppo city.

Map: Institute for the Study of War

Hezbollah and pro-Assad militias in Dahiyat al-Assad — “Tanks are attacking us”:

Footage of one of the vehicle bombs:

A demonstration in east Aleppo welcomes news of the offensive:

Russia: 36 Dead in Bombings of Idlib Schools Are “Fake”

Russia’s Foreign Ministry has tried a new line to clear Moscow of responsibility for Wednesday’s bombings of schools in Haas Province in Idlib Province in northwest — it says the bombings and the victims are “fake”.

The new line contradicts the immediate response of Russia’s UN Ambassador Vitaly Churkin: “It’s horrible, I hope we were not involved.”

The Defense Ministry subsequently claimed that Russian warplanes were not flying over the area at the time of the bombings.

Turkey: We Stopped Aerial Intervention Because of Assad Regime’s Warnings

Turkish officials have said that their warplanes have halted intervention in Syria because of the warnings of the Assad regime.

Turkey’s jet fighters struck targets of the Kurdish militia YPG for the first time on October 19, supporting a rebel offensive in northern Syria. However, the officials said the flights were on halted on October 22 because the regime “activated its air defense systems”.

The Turkish attacks were also on positions of the Islamic State. Turkey directly intervened for the first time in the Syrian conflict on August 24, accompanying rebels with airstrikes, tanks, and special forces.

On October 20, the Syrian military warned, “Any attempt to once again breach Syrian airspace by Turkish war planes will be dealt with and they will be brought down by all means available.”

A day later, Russian Foreign Minister Sergey Lavrov expressed his concern: “We are very alarmed about what is happening. As I understand it, we are talking about attacks on areas inhabited by the Kurds.”

The Turkish-supported rebels soon suspended plans to move on Tal Rifaat, a town taken from them by the YPG in February. Instead, Ankara and the rebels said they would move on al-Bab, the Islamic State’s remaining major position in Aleppo Province.

On October 25, a regime helicopter barrel-bombed the Turkish-supported rebels for the first time, killing two fighters and wounding five, according to the Turkish military.

A demonstration in East Ghouta, near Damascus, calls for rebel unity in the face of advances by pro-Assad forces:

The Assad regime has regained much of East Ghouta since the spring, in part because of in-fighting between the Jaish al-Islam and Failaq al-Rahman factions.

In recent weeks, the pro-Assad forces have taken high ground within a few kilometers of the town of Douma, the base of Jaish al-Islam. Artillery can now support the airstrikes on the town, surrounded since 2012.

A series of protests this autumn have challenged the rebels to end their differences and stand firm against the pro-Assad offensive.

In its latest investigation of links between the UN and the Assad regime, The Guardian has obtained documents showing that “scores of friends and political associates” of President Assad are part of UN relief operations.

Relatives of high-ranking regime ministers are on the Damascus payroll of UN agencies such as the refugee organization UNHCR and the World Health Organisation.

A former UN manager said every UN agency had at least “one person who is a direct relative of a Syrian official”.

Documents show that only 13% of WHO supplies have reached Syria’s “besieged” areas. Since January, 64% of the WHO’s aid has gone to regime-controlled locations.

A UN spokesman said “family connections are not taken into consideration nor investigated” when hiring staff, and the UN does not question prospective workers about their political affiliations.

The spokesman denied that the presence of people close to Assad was a threat to the UN’s work and said staff needed to reflect “the fabric of Syrian society”.

In August, The Guardian revealed that the UN has awarded aid contracts worth tens of millions of dollars to people closely associated with President Assad.