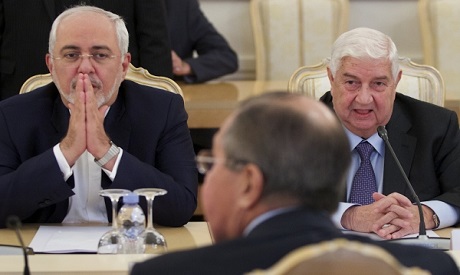 The discussions took place as Russia faces political pressure over the Russian-regime siege and bombing of opposition areas of Syria’s largest Aleppo. As Zarif and Lavrov were meeting, rebels launched a major offensive, taking regime positions southwest of the city and raising the possibility of a lifting of the two-month siege.

Iranian State media offered no reaction to the latest events. Instead, they featured Zarif’s remarks, as he landed in Moscow, that Iran “has always stressed the necessity of a multilateral ceasefire, sending humanitarian aid, and efforts to find a political solution to the Syrian conflict”.

He continued, “Some countries want war and a military solution to the Syrian conflict even though [only] a political solution can resolve the crisis along with combating Takfiri groups.”

At the photo opportunity with Lavrov and Moallem, Zarif said:

In fighting terrorism, Iran and Russia have had great cooperation. It is necessary that we expand this cooperation and discussions as much as possible, considering the threat from terrorism… The deplorable humanitarian situation in Yemen and Syria requires us to have more cooperation.