Syria Video: When a US Presidential Candidate Asks, “What is Aleppo?” 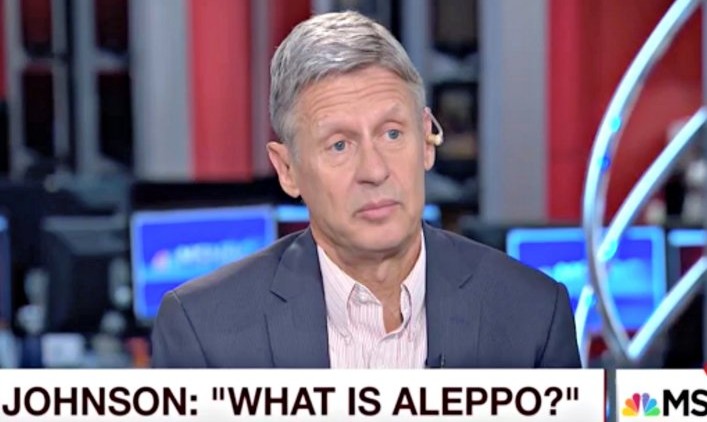 Gary Johnson is the Libertarian Party’s candidate for the US Presidency. While he is not as well-known as Donald Trump or Hillary Clinton, he is the choice of about 8% of Americans in opinion polls — and, if the unpopularity ratings of Trump and Clinton hold, he may pick up further support.

So it is more than a bit disconcerting when asked by America’s MSNBC about the Syrian crisis, “What would you do about Aleppo?”, Johnson’s response is: “What is Aleppo?”

Advised that “Aleppo is in Syria [and] is at the epicenter of the refugee crisis”, Johnson tries to recover, “With regards to Syria, I do think it’s a mess.” He then proposes working with Russia to resolve the conflict and dismisses the Free Syrian Army as being “alongside Islamists”.

However, he never says anything about Aleppo.

Is this is an isolated case of ignorance or does it offer a deeper lesson about the US system and American policy towards Syria? There’s a sequel that might offer an answer.

The former US Ambassador to Iraq, Christopher Hill, eagerly jumped onto MSNBC to deride Johnson,

But before he threw his big punch, Hill landed one on his own nose: “The capital of ISIS is very much in the news.”

The Islamic State has not had any fighters inside Aleppo city since 2014. Its center is in Raqqa, a city in a different province in northern Syria.

#ProTip: Dont use FP credentials to criticize politician for not knowing what Aleppo is & then say it's ISIS capital pic.twitter.com/aYPTcCWQOq

And the paragons of the US media did not remain above the farce. Writing about Johnson’s gaffe, The New York Times sank to his level by defining Aleppo as “a stronghold of the Islamic State“.