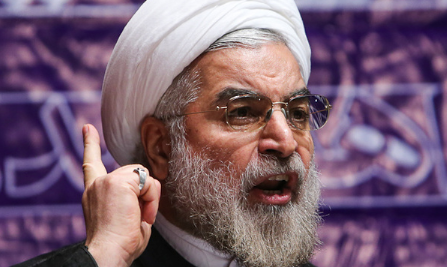 Iran’s President Hassan Rouhani has joined the escalating rhetorical attacks on Saudi Arabia, criticizing Saudi officials for “tactlessness and ineptitude” that led to the deaths of thousands of pilgrims near Mecca last September.

Speaking to the Cabinet on Wednesday, Rouhani said:

Last year a great number of pilgrims and Muslims, especially innocent Iranian pilgrims died and the Saudi government should be held accountable for this but unfortunately, they have not even spoken any word of apology.

Countries in the region and across the world should take coordinated measures to discipline the Saudi government.

The President then connected the Hajj affair to Iran’s regional challenge to Saudi Arabia:

If the only problem with the Saudi government was the Mina incident, we may have been able to find a solution for that and put it on the right track. But unfortunately, it is committing crimes in the region and supporting terrorism, shedding Muslims’ blood in Iraq, Syria and Yemen, and bombarding innocent women and children in Yemen.

The Supreme Leader raised the stakes on Monday with a published message, “Hajj Hijacked by Oppressors”: “Because of Saudi rulers’ oppressive behavior towards God’s guests, the world of Islam must fundamentally reconsider the management of the two holy places and the issue of Hajj.”

Ayatollah Khamenei said the Saudis were now “small and puny Satans who tremble for fear of jeopardizing the interests of the Great Satan, the US”.

Riyadh’s senior cleric, the Grand Mufti, responded on Tuesday with the accusation that Iranians “are not Muslims…and their enmity toward Muslims, especially the Sunnis, is very old”.

Iranian Foreign Minister Mohammad Javad Zarif tweeted in response that there was “no resemblance between the Islam of Iranians and most Muslims and the bigoted extremism that the Wahhabi top cleric and Saudi terror masters preach”.

And on Wednesday, the Supreme Leader used a speech to again denounce “the vicious and cursed progeny of al-Saud”:

Tension between Iran and Saudi Arabia has steadily escalated since last September’s disaster at Mina, near Mecca, when two marches converged for a Stoning of the Devil ceremony. The situation worsened in January when Saudi Arabia executed a prominent Shia cleric. A crowd in Tehran attacked the Saudi Embassy, and Riyadh broke relations with the Islamic Republic.

Negotiations for the return of Iranian pilgrims to Mecca broke down this summer, with each side accusing the other of obstructing any agreement.