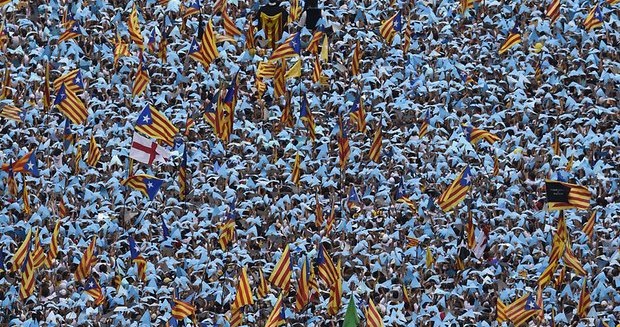 Jordi Solé i Ferrando, the Secretary of Foreign and EU Affairs in the Government of Catalonia, writes for EA:

In Catalonia, the start of the political year coincides with the celebration of our national day, the 11th of September. On this day, the country commemorates the fall of Barcelona in 1714 during the War of Succession, a defeat that, for Catalonia, meant the loss of self-government institutions, the abolition of Catalan law, and the repression of the Catalan language.

Only 10 years ago, those of us who demanded the independence of our country on the streets of Barcelona on the 11th September were relatively few and were rather divided. But today, there are hundreds of thousands of us, and we are united. Indeed, the demonstrations in favor of independence, especially since 2012, have been massive: they have often involved 20% of Catalonia’s population and have become among the largest civil society-led demonstrations that Europe has seen in recent years.

See also Catalonia Q&A: The Quest for Independence from Spain

Catalonia is experiencing a remarkable democratic revolt, born in the street and through civil society. It is still very much present there, but it also now has a majority in the Parliament of Catalonia and in the Catalan government, thus giving the movement the allies necessary to complete the process.

After elections in September 2015, a majority of Catalonia’s MPs are committed to the independence of their country. The government is undertaking the necessary actions to make our country an independent state, with the democratic endorsement of the citizenry.

“A Legal and Legitimate Revolt”

The Catalan democratic revolt is reaching its climax. It is a legal and legitimate revolt. It is legitimate because every nation has the right to freely determine its future.

Before civic and political movements joined forces to become a majority on the street and in Parliament, Catalonia tried many times and in many different ways to find a satisfactory fit within the Spanish state. It sought to be recognized and respected as a nation that voluntarily participates in the Spanish joint venture. But all these efforts were in vain. They were met in Madrid with a homogeneous, centralized view of the national, cultural and linguistic diversity existing within the state.

When we are told time and again that the recognition of the Catalan national situation and its appropriate and necessary institutions are impossible, the reasonable way forward — within the European Union and an increasingly globalized economy — is to take the path of democracy: Catalonia’s path to a viable, prosperous, and just state at the service of its people and in a fairer process of governance in Europe and the world. We can see this in the example of the United States, with a Declaration of Independence which upholds national self-determination, especially when there are the objective reasons to justify it — as in our case.

A Right to Self-Determination

The current political vacuum in Spain accompanies the denial of Catalan political aspirations, causing embarrassment. After two elections in six months, the main Spanish parties have not been able to form a government, and all indications are that we are heading towards a third election.

The failed investiture of Spain’s Prime Minister Mariano Rajoy was based on an agreement between the conservative PP and neo-liberal Citizens parties. This agreement did not offer a political solution to the demands of the Catalan people — for example, the authorization of a referendum on independence, as the UK Government did with Scotland. It contained agreements designed to eliminate the language model that has been successfully applied in Catalonia’s schools for the last 30 years.

On the other side of Spain’s political spectrum, there is neither the will nor the courage needed to let the Catalans vote on their future. The Socialists categorically deny us this opportunity, and the New Left represented by Podemos is ambiguous and non-committal. Because of the political impasse in Madrid — if we are to be citizens of a country with efficient institutions that are open and serving the people and their real, everyday needs — the only option available is independence.

The process of Catalan independence is therefore legitimate. And I want to stress that it is legal because it is based on the right to self-determination, a principle enshrined in various international treaties, and the prevalence of the democratic principle, which is what binds legitimacy and legality.

The choice of the Catalan people, which we will make very soon and through the mechanisms of democracy, is between the unrepresentative status quo within the Spanish monarchy or a better future in a Catalan Republic. We are convinced that the international community will not hesitate to welcome a state created through the ballot box.