Syria Daily: Rebels Move Into Artillery Base Near Aleppo 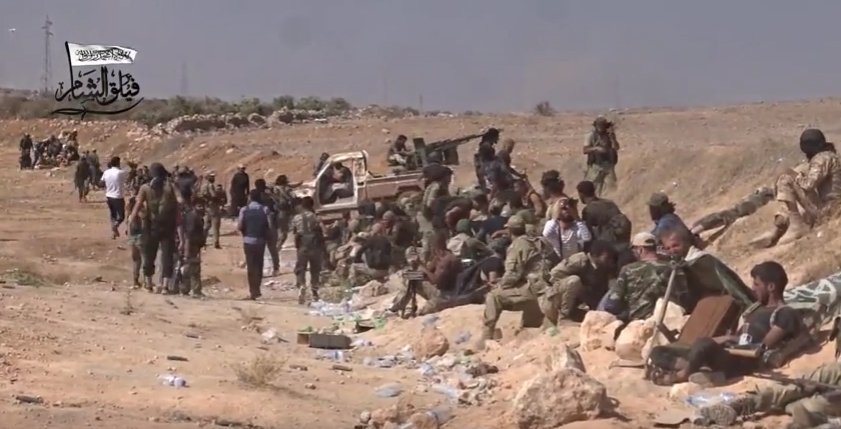 PHOTO: Fighters of the rebel faction Faylaq al-Sham on the southwestern Aleppo front

UPDATE 2100 GMT: Pro-rebel sources report an Iranian-Hezbollah counter-offensive, under cover of intense Russian airstrikes, in an attempt to regain positions in the artillery base.

Hezbollah fighters have reportedly been drawn from other fronts to prevent the fall of the base.

A pro-rebel account indicated that fighters pulled back because of Russian strikes but then renewed their attacks.

JaF withdrew an hour ago from artillery Base briefly due to 30+ RuAF airstrikes. They are now back in and holding their ground.

The base is made up of more than 100 buildings including warehouses, housing, meeting halls, and dining areas.

Rebel fighters inside the base, with reports of “building-by-building fighting”: 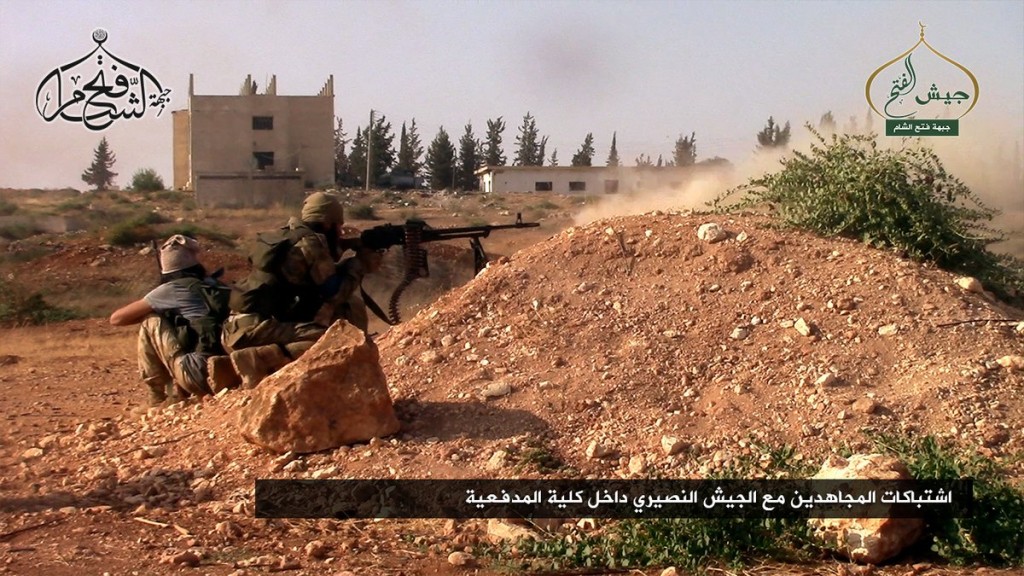 UPDATE 1700 GMT: Reliable sources reveal that rebels were inside the regime artillery base “for days” before much of it was captured on Friday.

The sources said rebels disguised themselves as regime troops to infiltrate the base. Then they took up positions to help rebel forces secure adjacent areas and to hit the complex with the vehicle-borne suicide bomb that started the invasion of the complex.

UPDATE 1730 GMT: Rebels have reportedly used two more vehicle bombs to try and remove pro-Assad forces from their remaining positions in the north of the artillery base.

UPDATE 1545 GMT: Local sources in opposition-held Aleppo say convoys of regime officials and military officers are trying to use the last open route to reach two airports and the road to Hama Province.

The sources say the convoys are attempting to get to the Aleppo airport and the Nayrab military airbase and to the “escape route” from Safira — east of Aleppo city — to Hama Province.

Because the southern ring road is now under rebel “fire control” — and, in some places, occupied by rebel forces — all regime traffic is having to travel north to the area of Nubl and Zahraa before going all the way around Aleppo to the eastern suburbs.

Rebels now hold positions along the ring road, not only in and near Ramouseh but also close to a large cement factory. They have seized the nearby quarries (see map).

Having taken much of the regime artillery base, rebel forces are trying to move to the east to take more neighborhoods and industrial building in Ramouseh.

Russian warplanes are trying to counter with strikes, exploding an ammunition dump.

Beyond Ramouseh, rebels are attacking along the frontlines west of Aleppo, aided by forces challenging regime positions inside the city.

UPDATE 1440 GMT: Local sources confirm that rebels have captured most of the regime’s artillery base (see map) next to the town of Ramouseh, southwest of Aleppo.

Among the positions taken are the officers building, two faculty buildings and an ammunition storage area.

The artillery base is the regime’s third-largest in the country. Rebels had surrounded it on three sides and begun shelling of the complex earlier this week. Meanwhile, they moved into Ramouseh, taking the areas next to the base.

If the base is fully captured, rebels will be close breaking the Russian-regime siege of opposition areas of Aleppo city. 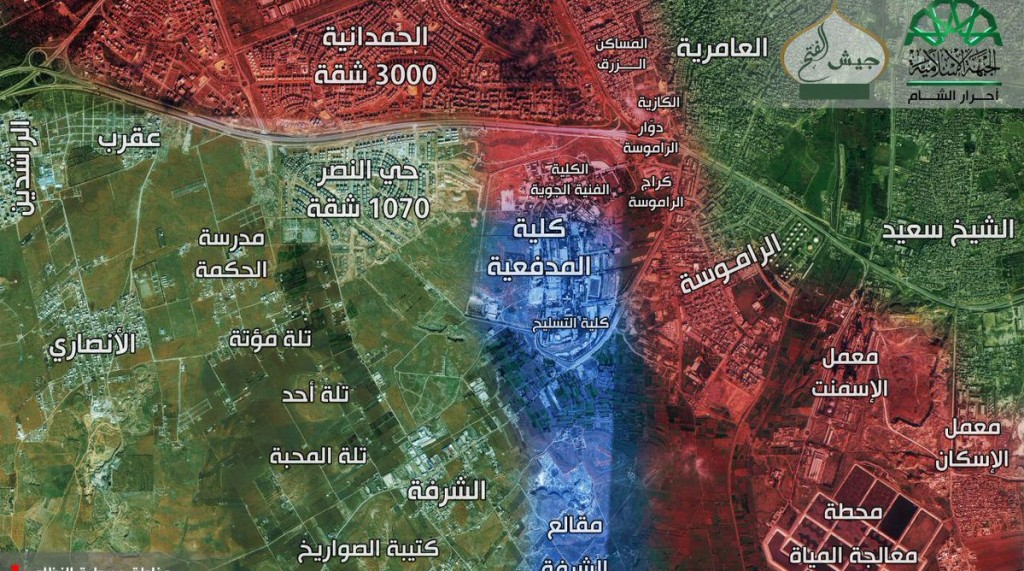 Just before pushing into the base, rebels destroyed a position with rocket launchers and anti-tank guided missiles to the northwest. The attack on the complex then began with a vehicle suicide bomb.

ORIGINAL ENTRY: Syria’s rebels have taken another village in their offensive southwest of Aleppo.

On the sixth day of their major offensive near Syria’s largest city, rebels captured al-Amiriya.

While some pro-Assad accounts maintained that no territory was lost, the pro-regime al-Masdar News acknowledged the rebel advance. Fars News, the outlet of Iran’s Revolutionary Guards, also admitted that rebels hold the village.

Amiriya had been contested since Monday.

Rebels also claimed that they moved into the village of al-Jamiyat.

Pro-Assad forces tried to reclaim lost positions elsewhere, including parts of the 1070 housing complex and the Hikmah school, used as a staging area for the Syrian military and Iranian and Hezbollah units. So far there is no confirmation of any gains. 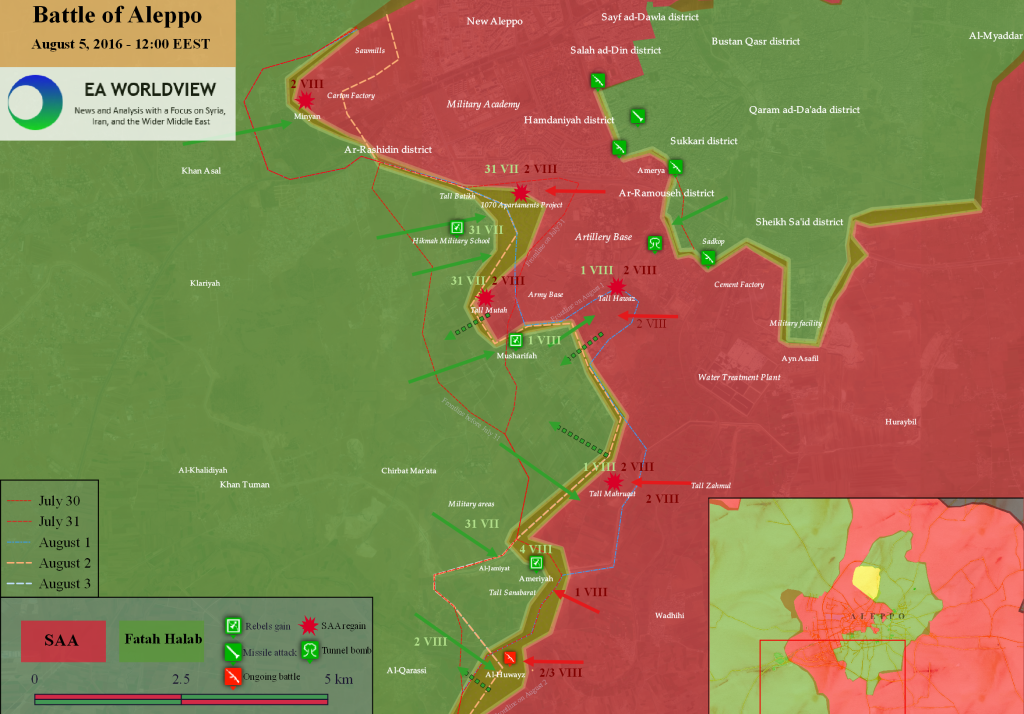 The rebel offensive began on Sunday along a 20-km (12.5-mile) front west of Aleppo. To the north of the city, the rebels have checked the pro-Assad advance that has cut off the last route into opposition-held parts of the city.

On the southwestern front, rebels have captured the staging post, the 1070 housing complex, an oil depot, and a series of villages. They have moved into part of the town of Ramouseh, adjacent to one of the regime’s largest artillery bases.

Russian airstrikes have been essential in holding back the rebels, preventing the collapse of the defenses in Ramouseh, and trying to help pro-Assad forces reclaim territory.

Rebels are seeking to break the Russian-regime siege of Aleppo city and to cut off supply routes to the Syrian military and its allies.

Fighting near the 1070 housing complex:

Russian airstrikes on the Hikmah school:

UN: We are Near Deal with Russia on Aleppo “Humanitarian Corridors”

UN officials have said that a deal with Russia and the Assad regime over “humanitarian corridors” for opposition areas of Aleppo city could be agreed within days — even though there is widespread scepticism about Russian-regime motives.

“We are in intensive discussions with the Russian Federation and the government of Syria to ensure that the civilian population in Aleppo is protected,” said the UN Deputy Special Envoy for Syria, Ramzy Ezzeldin Ramzy.

Russia proclaimed last week that it was establishing seven humanitarian corridors for civilians and surrendering rebels from eastern Aleppo city. However, residents and activists said no corridors were established, and residents trying to move risked being shot by snipers.

A day after the Russian Defense Ministry’s announcement, Russian and Syrian State media put out video claiming to be of civilians and disarmed rebels who moved from opposition to regime areas of Aleppo. However, the footage appeared to be staged, with suspicion that interviewees were actually residents of regime-controlled districts.

Pro-opposition activists have also noted that Russia and the Assad regime could be luring men so they can be detained — as happened with a similar movement of civilians in Homs city — or could be trying to de-populate the area in preparation for a ground and aerial offensive.

It’s hard to know what their ultimate goal is.

There [doesn’t] need to be corridors. The UN should have full humanitarian access to all parts of Syria. For them to create this grand gesture of opening humanitarian corridors is in and of itself a contradiction to what they’ve already agreed to.

Mustafa Sejry of the Liwa al-Mu’tasim Brigade said he met a Russian representative at the Syrian-Turkish border in late July and was offered “unlimited amounts of weaponry and close air support” to fight both the Islamic State and the jihadists of Jabhat Fatah al-Sham.

According to Sejry, the Russians said, “We’re not stuck to any kind of agenda. What we want to do is go back to 2012 when there was a government and an opposition.”

The commander, now in Istanbul said he is scheduled to have follow-up discussions with the Russians. He indicated these were being quietly arranged by the Turkish Government.

Sejry said he relayed the Russian offer to two US Army captains, but they did not respond.

The commander has had a tense relationship with the Americans, threatening to withdraw from a train-and-equip program before joining.

Sejry said that, despite breaking an Islamic State siege in northern Aleppo Province in June, US aid is still intermittent: “We’ve received only one month worth of salaries in the last three months.” He also said that a promised bonus never appeared, and that no replacements were delivered for vehicles and mounted machine guns lost in the fight against ISIS.

He asserted, “We feel betrayed. Now other options are on the table.”

The leader of the jihadists of Jahbat Fatah al-Sham (formerly Jabhat al-Nusra) has issued an audio message of support to the people of Aleppo.

Abu Mohammad al-Joulani praised the residents “who live under the bombs and siege” and said anti-Assad fighters will not let them down. He praised the unity of rebels in the Aleppo offensive, saying their victory is tied to that unity.

The message comes a week after Joulani announced the renaming of Jabhat al-Nusra and detached it formally from Al-Qa’eda, in the cause of unity in the fight against the Assad regime.

Journalists from outlets such as Al Jazeera and Orient News survive a pro-Assad airstrike on a rebel tank near Aleppo: